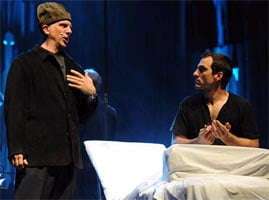 Few post-war composer-conductors have altered the emphasis of their activities more successfully than Peter Eötvös: few so inherently European composers would have tackled so evidently American a play as “Angels in America”. Tony Kushner’s two-part, six-hour ‘Gay Fantasia on National Themes’ is arguably the most significant English-language drama to appear this past quarter-century, not least because its overall ‘reach’ – whether intellectual or emotional – is rivalled by few, if any of its peers.

Yet tackle it Eötvös did – creating (with the help of his wife, Mari Mezei, who fashioned the skilful and highly effective libretto) a two-hour opera that preserves the essence of the drama as well as, more unexpectedly, its cultural ambience. In part this stems from an orchestral sound that draws both on elements of Berg and Sondheim, though without sounding especially like either. This inherently yet understatedly ‘transatlantic’ sound serves Eötvös well in terms of atmosphere and characterisation. 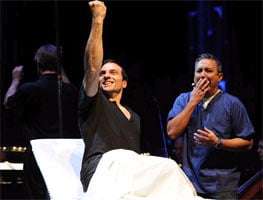 Moreover, the concert staging by David Gately, given as part of the Barbican Centre’s “Great Performers” season, was wholly attuned to the music – representing each scene concretely but with a heightening sense of involvement that drew the audience through the evolving drama. Equally successful was the utilising of the singers as scene-changers, a Brechtian ruse which should never have fallen out of favour, while the lighting had a luminosity that clothed the action with an unreality in keeping with the malaise of those who have lost their way. The use of amplification was ostensibly more controversial yet, one or two instances of overload aside, the music did not suffer from any coarseness (Eötvös’s orchestration being textually too sophisticated), while the vocal writing communicated clearly at all times. Seldom, in fact, have surtitles seemed so unnecessary, but this is not to decry their usage.

The cast, some of whom took part in previous stagings, was impressive. David Adam Moore conveyed the earnestness and negation of AIDS-stricken Prior with real thoughtfulness, Scott Scully responding with the requisite mixture of warmth and anxiety as sometime-partner Louis. Omar Ebrahim judged the vacillation and increasing self-denial of Joseph to perfection, as did Kelly Anderson the hectoring justification of Roy – destined to die from a disease he associated with those he despised. Janice Hall served up witty and affecting cameos as Hannah, the Mormon mother out of place in a maelstrom of iniquity, and the Rabbi who directs the opening funeral service with a tellingly bemused scepticism. 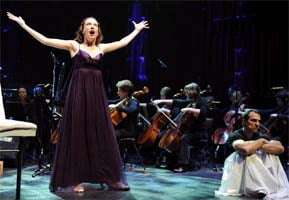 A distinctive voice often difficult to put in context, Brian Asawa was in his element in a sequence of roles both male and female but, if it belonged to anyone, the night surely belonged to Julia Migenes. Never the most alluring of voices (at least her 1980s film version of “Carmen” lingers in the memory thus), her ability as a vocal-actress has had no better role than that of Harper – the valium-addicted wife trapped in a sham marriage, whose monologues merge into and out of those ‘dream sequences’ which periodically transport the narrative to another plane. She was no less inside the role of Ethel Rosenberg, or at least her ghost which returns to haunt her ‘executioner’ Cohn on his deathbed. As The Angel, Ava Pine had the virtuosity necessary to bring off her appearance at the end of Act One – one of the great theatrical moments in post-war opera and as spine-tingling here as it needed to be. 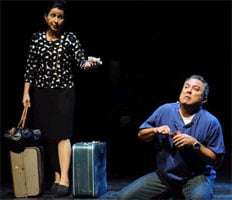 Having worked professionally with Eötvös over many years, David Robertson has an evident grasp of his musical idiom – conducting with a vitality and, where necessary, expressive force that brought the opera eloquently to life. As difficult as the slow-burning intensity of Act One may be to reconcile with the often-hectic immediacy of Act Two, there was little sense of imbalance in the way the work unfolded. Saxophones, guitars, electric organ and percussion were pointedly though never insistently underlined, as were the Swingle-isms – whether cute or ominous in import – of the onstage vocal trio.

At its Paris premiere in 2004, “Angels in America” was received with guarded admiration – as if the treatment of Kushner’s play was too far removed to do justice to its subject-matter. Having been given several times since, on both sides of the Atlantic, its veracity to and subtle opening-out of the original seemed never less than affecting. Such, at least, was the feeling left by this performance.