Annie Get Your Gun
Music and lyrics by Irving Berlin, book by Herbert & Dorothy Fields, with additional dialogue by April de Angelis 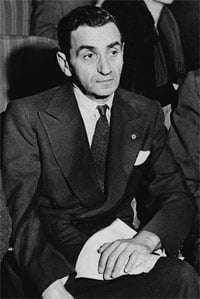 Irving Berlin knew what he was doing when he wrote a musical. Born in Russia but living in the States from age five, he learned English from singing on the streets of the Big Apple and as he worked as a singing-waiter he started writing songs and had his first number published when aged 19. His initial hit-song was ‘Alexander’s Ragtime Band’, since when he never looked back. He acquired the knack of knowing exactly what the American public liked. His hits include ‘Blue Skies’, ‘Cheek to Cheek’, ‘God Bless America’, ‘Let’s Face the Music and Dance’, ‘Change Partners’, ‘White Christmas’, ‘Count Your Blessings’, ‘It’s a Lovely Day Today’ and ‘You’re Just in Love’, to mention but a few. In spite of the fact that Berlin could neither read nor write music, he had an instinct for harmony, melody and an insight into how to construct a good popular song. All these qualities produced hundreds of them that have permeated the consciousness of generations of theatregoers and music-lovers, and have acquired classic status.

“Annie Get Your Gun” was Berlin’s most successful theatre show and film musical and includes ‘Doin’ What Comes Natur’lly’, ‘The Girl That I Marry’, ‘Can’t Get a Man with a Gun’, ‘They Say It’s Wonderful’, ‘Moonshine Lullaby’, ‘My Defences Are Down’, ‘I’m an Indian Too’, ‘I Got Lost in His Arms’, ‘I Got the Sun in the Morning’ and ‘Anything You Can Do’ – and they are just the hits; and “Annie Get Your Gun” also has that great anthem, ‘There’s No Business Like Show Business’.

It’s odd that “Annie Get Your Gun” should have been an instant success because Irving Berlin was not the first choice to write it. The brother-and-sister team of Herbert and Dorothy Fields were contracted to write the book and the lyrics to the music of Jerome Kern. Richard Rodgers and Oscar Hammerstein II were the producers and Ethel Merman the star. Kern died suddenly on his way from California to New York. The producers felt they could only ask someone of Berlin’s stature. Since Berlin always wrote his own lyrics, Dorothy Fields just co-wrote the book with her brother. The rest is musical theatre history.

It’s a simple story about the real-life Annie Oakley, an illiterate backwoods girl who’s a crack-shot with clay pigeons. She meets Frank Butler, the champion sharpshooter. Both are the equal of one another, so she joins him in Buffalo Bill’s Wild West Show that toured the US in the late-19th-century. They even performed in London for Queen Victoria in 1887. In the show they fight and split up but are eventually reconciled when they have another shooting match, in which Annie lets Frank win. Since the 1999 revival political correctness has kicked-in and the final match is a draw (!), while the song ‘I’m an Indian Too’ is now deleted!

So, a simple love-story in which girl meets boy, girl loses boy and then meets boy again is hitched to a fantastically tuneful score: who could ask for anything more? Well, in this Young Vic production it isn’t enough for director Richard Jones and designer Ultz, who have updated the piece to the 1940s so that Annie can go on a European tour to meet Churchill, De Gaulle, Mussolini, Stalin, Mao and even Hitler, who all award her medals for shooting. And political correctness or not, Colonel Buffalo Bill is played by a black actor (Chucky Venn), as is Annie’s little helper, while Sitting Bull (Niall Ashdown) is whiter than white. Jones is principally an opera director and what he has here is something that would not look out of place at the London Coliseum.

There is no atmosphere or sense of time and place in the show, qualities usually revealed in a production’s sets and costumes. The whole thing is played out on a stage of CinemaScope proportions divided into two and littered with chairs that are arranged in rows to convince us we are travelling on a train or a liner – it doesn’t work, not even with the passing scenery of telegraph poles, buildings, sheep or other ships on a sort of “Generation Game” travelator. This looks like anti-décor created to confuse its audience. Some may call it Brechtian: a description that has no place in an Irving Berlin show.

The performances are variable. Jane Horrocks mugs her way through the part of Annie Oakley, barely believable as a pistol-packing mama, squawking and squealing in a way reminiscent of her ditsy PA in “Absolutely Fabulous”, a sort of Bubble and squeak performance. She has a good voice but needs to work more on the characterisation. At least she doesn’t chew up the furniture as Betty Hutton did when she replaced Judy Garland in the film version. Julian Ovenden, last seen (to advantage) in Michel Legrand’s musical “Marguerite” with Ruthie Henshall, is a talented song-and-dance man with a good, strong voice, but also seems out of his depth as the sharpshooting Frank Butler, a part played in the film by Howard Keel. John Marquez is very good and very funny as Charlie, manager of the Wild West Show and Liza Sadovy gives good support as Dolly, his opposite number, who also has her eye on Frank. Buffy Davis doubles well as Mrs Wilson, the Hicksville hotel keeper, and society lady Mrs Potter Porter. The remaining ensemble is a little thin with just nine members, and Annie’s ‘family’ is reduced to one little girl, Jessie.

Some of the numbers go over reasonably well, although there is a general air of flatness about the whole thing because the orchestrations are reduced to arrangements for four pianos spread out in front of the vast proscenium stage. Jason Carr’s musical supervision seems to crush the music, depriving it of its innate tunefulness. At curtain-up the overture sounds almost incomprehensible. Perhaps this production should have taken a leaf out of the Union Theatre’s book, a Southwark fringe venue scarcely 500 yards from the Young Vic which last year staged an amazingly joyful and enjoyable production of “Annie Get Your Gun” in a pocket-sized space in which the illusion of being at a Wild West show in a circus-setting was created merely by using a few red, white and blue streamers and some coloured lights.

The Union’s theatre-in-the-round staging brought the audience into the action, while the cast also played instruments – piano, violin, guitar, banjo, Swanee whistles, drums, pots and pans and other percussion – thus emphasising the musical nature of the show. The Young Vic production lacks musicality. And the level staging on a vast platform in a huge space with non-raked seating is rather like watching a show in a school hall. For a Christmas production this is not going to win many friends; like Sitting Bull, the audience is bound to have reservations.

Does anyone want to start a Society for the Prevention of Cruelty to American Musicals?