Britten
Curlew River, Op.71 – A parable for church performance to a libretto by William Plomer based on the Japanese Noh-play Sumidagawa by Juro Motomasa 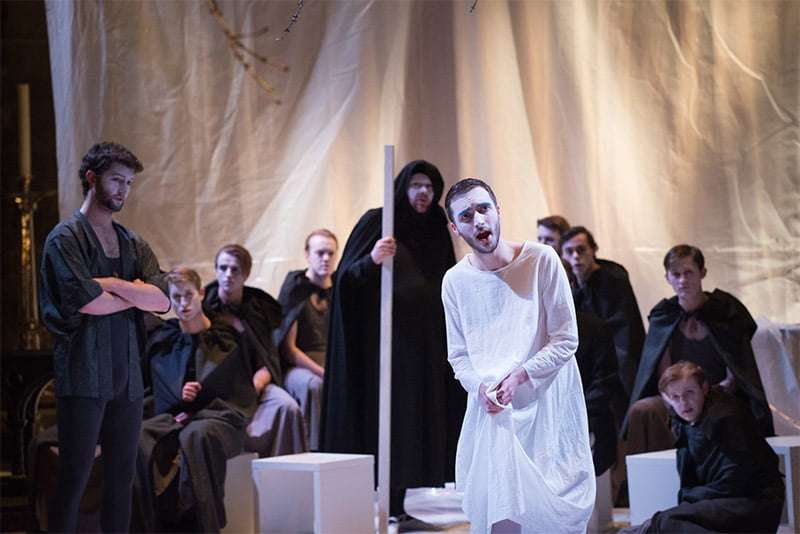 Ante Terminum Productions, a new London-based opera company, launched in style with Britten’s Curlew River, which had its premiere in St Bartholomew’s, Orford, in 1964, and, over half a century later, has alighted for a short run (until January 13) at the mysterious and magnificent church of St Bartholomew the Great, in Smithfield. Of all the churches in which I’ve seen Britten’s haunting parable of grief, loss, renewal and spiritual grace, this is the most atmospheric, even if there are a few problems with sightlines and audibility. The company’s name, presumably, comes from the Compline hymn ‘Te lucis ante terminum’ (“Before the ending of the day, Creator of the world we pray”) which the monks’ chorus sings at the beginning and end of Curlew River, and which slides so magically into Britten’s music. All the singers are at the start of their careers.

Britten may have been inspired by the Japanese aesthetic of the original fifteenth-century Noh drama, but, while he honoured it, he assiduously avoided pastiche – the nearest he got to anything like imitation is in the writing for flute and percussion. As in his opera The Rape of Lucretia, his Christian annexation of the story – of the Madwoman’s search for her son and her transfiguration when she finds that he has died and is venerated – has been a problem, sometimes almost an embarrassment, for producers, but I think that the vague shadow image of the high altar cross behind a screen isn’t quite as ambiguous or subliminal as the designer Crispin Lord has intended. His performing area is the length of the church’s nave, with the audience ranged either side, and the ensemble similarly divided at the east end. Props are minimal – some stools that became the ferryboat and a tree marking the lost boy’s grave. 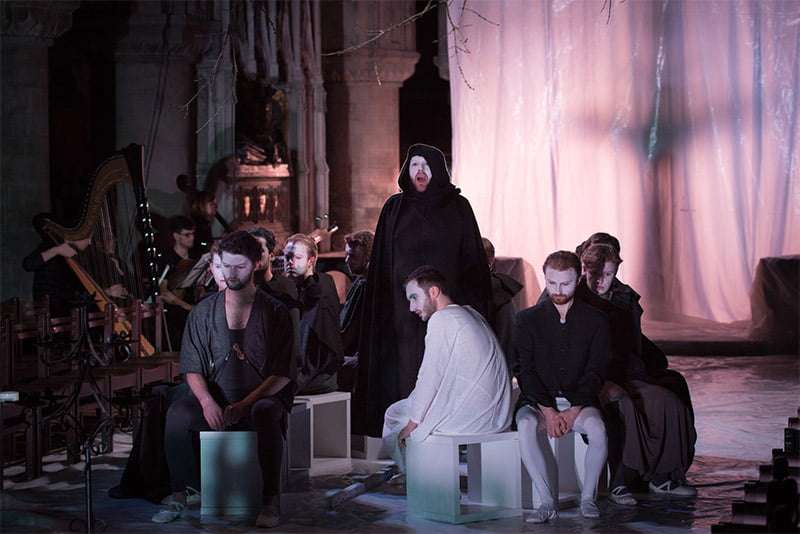 Lord’s costumes, designed with gender fluidity in mind, are dresses and capes for the eight monks, figure-hugging tights for the Traveller, Abbot and Spirit of the boy, and a hood and cloak for the Ferryman. With an exclusively male cast, this point eluded me, unless it is a nod towards Japanese costume and a further dilution of Christian allusion. In any case, it didn’t make that big a statement. No masks, no ritual enrobing, and no heavily stylised movement – it’s all sober and natural, and, like the music, pared right down to the bone.

The role of the Madwoman has brought out some extravagant portrayals, which, while memorable, can render it too much of a solo vehicle. Richard Robbins, dressed and defeminised in a simple white shift and his tenor blessed with an irresistible baritonal softness, was restrained almost to the point of self-effacement. Yet, with the audience so close to the action, this only intensified the character’s grief, with Robbins’s expertly judged acting compounding the poignancy. Ben Bevan trenchantly characterised the bluff Ferryman’s growing sympathy for the Madwoman’s plight, Ivo Almond’s finely sung Traveller added layers of mystery to the unfolding drama, and Tom Herring’s noble baritone defined the Abbot’s narrator role. James Bennett, first seen as a ghostly shadow, has the right treble purity for the Spirit of the boy, although I am undecided whether it works to see him in the flesh.

Instrumentalists I’ve talked to who have played in Curlew River say that once they get into the groove of Britten’s conductor-less layering of entries, the ensemble among themselves and with the singers flows quite easily. I was barely aware of any overt direction from Frederick Waxman on a chamber organ, the flute part that ghosts the role of the Madwoman was played with great perception by Thomas Sargéaunt, and, if you think of Curlew River primarily as an example of extreme minimalism, the power of the climax was compelling and, in context, very grand. I always come away from Curlew River thrilled but mystified by its haunting qualities, and this performance enhanced my mystification.