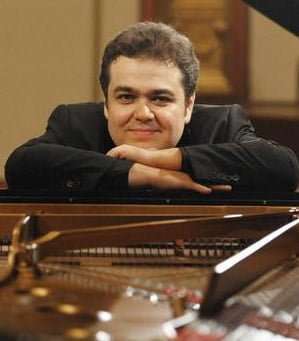 Arcadi Volodos is feted as one of the great poet-pianists of his generation (he’s 43). The antithesis of flashy pyromaniac, he almost makes a fetish of his undemonstrative style, yet, as he sits comfortably at the keyboard on an office chair, everything seems balanced to give his flowing technique maximum space and is particularly well-suited to give the solidity and submerged luminosity of Brahms’s piano music its clearest expression, which Volodos explored to the full in the Theme and Variations (arranged by the composer from the slow movement of the Opus 18 String Sextet.)

What a way to start a recital. In a mere ten minutes Volodos took us from overwhelming Baroque monumentalism to close with an entirely modern sense of loss and consolation, in the process allowing us to think that this was a transcription from full orchestra rather than a sextet. The half-light of the two major-key Variations followed by the minor-key desolation of the final one pointed out how Volodos achieves intensity overload by stealth, as well as his fondness for a sound often on the edge of audibility.

The latter became even more noticeable in Opus 76, Brahms’s description of these ‘big’ miniatures as either ‘Intermezzo’ or ‘Capriccio’ the start of a process of Brahmsian ambiguity that Volodos couldn’t help but enlarge on – fifty (and counting) shades of grey for the keyboard, such is Volodos’s mastery of the infinite variety of Brahms’s melancholic palette. Even when the music roused itself, Volodos subtly guided it back to some of the most withdrawn playing I’ve heard. A hint of the theme emerged briefly out of a halo of arpeggios in the first ‘Capriccio’, a Hungarian dance snapped into action in the second, but the overall impression was of muted grief in free-fall.

It was strange that while Volodos’s playing never sounded contrived, he used the soft pedal to usher the music into the furthest recesses of introspection. His left-foot edged forward, then a muffled ‘Des pas sur la neige’-style impressionism veiled everything, to the extent that as an expressive intensifier it became mannered.

Perhaps because it reminded me a bit of András Schiff’s conversion to the refined delights of the fortepiano and its more precise range of registrations, I didn’t notice it so much in Volodos’s superb performance of Schubert’s B-flat Sonata, mainly due to his awareness of how its lyricism and structural definition complement each other so powerfully. His control of the first movement’s destabilising low trills was full of significance, his calibration of the long lead-back to the exposition repeat adding immeasurably to its emotional range, and the bell-like notes in the slow movement (taken at a very weary Andante) were more a trick of otherworldly suggestion than audible fact. I’d never felt more grateful for the relative brightness of the Scherzo and Finale.

With seer-like directness, it seemed that Volodos was playing just for you, something that the audience instinctively picked up on. The standing ovation encouraged him into a mini-recital of encores: Schubert’s C-sharp minor Minuet (D600) – quieter, unbelievably, than anything we’d already heard – a wonderfully laconic ‘Jeunes filles au jardin’ from Federico Mompou’s Escenas de niños, then Volodos’s own transcription of Ernesto Lecuona’s ‘Malaguena’ (from Suite Andalucia, and which gave us the first mighty fortissimo and full-on scorching virtuosity of the evening) and finally a rendition of Brahms’s E-flat minor Intermezzo (Opus 118/6) of barely credible sadness and self-effacement.