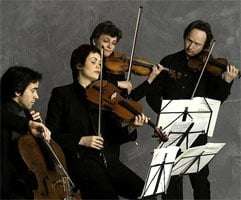 Everyone at this excellent Wigmore Hall recital, except Jean-Guihen Queyras, indulged in unnatural practices in the first half. By which I mean that the very act of playing the violin or viola is unnatural, involving contortions that most of us would not enjoy; and listening to strict 12-tone music goes against the grain of natural human inclination. Yet again, on a strictly personal level, I found myself sympathising with Sir Adrian Boult, who confessed that every time he returned to a 12-tone piece, he had to start from scratch. I go back a long way with Berg’s Lyric Suite. I must have heard it at least twenty times live and I own a number of recordings, including two by Felix Galimir who studied it with the composer.

Every time I listen to it, I can hear (and see) what is going on, but hardly a vestige is left from my previous hearings. A few gestures, perhaps, but that is all. I wonder if I was alone in wishing I could have heard the talents of the Arcanto Quartet expended on Reger’s E flat Quartet, or Janáček’s ‘Intimate Letters’, a work which has much in common with Berg’s piece but is much more communicative (to me, at any rate). Mind you, I had all the help I could have wished for, as Queyras gave us a little explanatory talk. Having referred to the “wonderful” programme notes – I thought them pretentious and rather badly written – he had his colleagues play some of the principal thematic signposts, joining in where appropriate. I heartily approve of this kind of introduction, especially when it is done so gently and persuasively.

The performance itself was a fine one, technically impeccable, tonally interesting and doing everything to persuade us that Berg’s music really is lyrical and romantic. The manner and the necessary intellectual assurance were both present, so that the music unfolded exactly as we are always told by the Hans Kellers of this world that it should. I was duly impressed but, more than ever, found myself looking forward to the Schubert.

I should perhaps explain that the Arcanto Quartet is composed of four soloists who come together for concentrated periods to study and perform works dear to their hearts. The idea is not new – it goes back at least to the Busch Quartet, and in the nineteenth-century such line-ups often combined for specific concerts, not least in London – but the Arcanto is one of the best examples today.

Schubert’s G major is a test even for such players. It is wonderful to hear the individual lines delivered with such lustre, but the almost orchestral weight demanded by the first two movements can take its toll if everyone is not thoroughly keyed up. The players did not make things any easier for themselves, as they observed the exposition repeat that takes the opening movement to inordinate length (20 minutes on this occasion). It may be heresy, but the repeats in the D minor and G major String Quartets add anything to performance; indeed they interrupt an absorbing journey.

Well, after this self-imposed disruption the Arcanto musicians kept the piece moving inexorably forward and unleashed terrific power in the development. The violinists and the violists also played with great delicacy in pianissimo passages – Queyras was sometimes a little too loud, although he made such a beautiful sound that one hardly minded. Unusual voicings can often add to the pleasures of this work, where the texture is so intriguing. The weight of Schubert’s outbursts in the Andante did not daunt the musicians. Again the playing was resilient, so that there was never any question of the music sinking down in exhaustion. What a terrifying movement this is! What anger it unleashes! What other apocalyptic visions might Schubert have vouchsafed us, had he been permitted a few more years? The scherzo seemed to be going according to plan, but strangely Queyras did not pick up the rhythm of his solo in the trio until very late, and even then did not really catch its Viennese idiom. The guileless Ländler melody fared much better when Antje Weithaas took it up. The players prepared for the finale as if embarking on a marathon – for maximum effect, it should follow hard on the heels of the scherzo. Even their soloistic standards of intonation did not enable them to emerge unscathed and at one point they were trying to pump out too much sheer tone; but they kept Schubert’s tarantella spinning along and finished in good order. In all, a memorable concert.