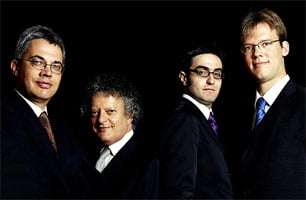 The Arditti Quartet and Hilliard Ensemble were originally scheduled to give the US premiere of Wolfgang Rihm’s ET LUX in what was also the last concert of a tour by the Arditti. Due to the illness of one of the members of the Hilliard, the Arditti opted to assemble a last-minute substitute program of recent quartets by three of Europe’s leading composers.

The Arditti Quartet has long championed the music of Wolfgang Rihm, whose Quartet No.12 dates from 2000-01. The work is divided into three distinctive sections — the opening’s hushed atmosphere also conveyed a palpable sense of suspense, at last giving way to a rapid-fire, crackling contrapuntal section, with musical figures that combine, collide and transform in a manner that reminds of Rihm’s Jagden und Formen (according to Irvine Arditti, the present work does indeed share material with that work for ensemble). The final, lento section eases the work to a satisfying denouement. This quartet is the shortest of the twelve Rihm has written to date, timing at just over fifteen minutes, and is well worth seeking out if you are unfamiliar with this prominent and prolific German composer’s music.

Pascal Dusapin is not as well known on this side of the Atlantic as he deserves to be. He first came to prominence in the late 1970s; he is also an alumnus of Xenakis’s seminars. String Quartet No.5 is in a single movement divided into sections that seem to melt into one another, and is inspired by Samuel Beckett’s “Mercier et Carnier”. The novel explores the limits of language and the role of misunderstanding. The music itself takes on the character of a four-way conversation in continuous transformation and on the verge of being derailed. Each section has a unique dramatic temperament, sometimes genial, sometimes confrontational, and sometimes terse. In one very striking passage just past the midpoint, a transition reveals long notes in the stratospheric high range of the first violin yielding to a rapid, pianissimo, rhythmically unified legato tutti passage played sul ponticello – a gesture that created a portrait of four musicians playing with the same timbre, conveying a message in completely disjunct sequence, in the spirit of an age filled with information overload.

Harrison Birtwistle, like Peter Maxwell Davies, discovered an inspiring creative retreat on an island off Scotland a few decades ago. Unlike Maxwell Davies’s haven in the Orkneys, Birtwistle’s destination – Raasay – had almost nothing in the way of musical tradition, the result of an almost Taliban-like orthodoxy of the Scottish Presbyterians who had settled there hundreds of years ago. The Arditti succeeded mightily in conjuring the spirit of the island’s hidden music, passed on through oral tradition, in The Tree of Strings, which had received its US premiere the previous evening at Le Poisson Rouge.

The work is a great deal more allusive to tonality than much of Birtwistle’s output, although it also carries an abundance of the shimmering trills, weighty tremolandos, and strong rhythmic underpinnings that characterize his style. The biggest surprise is the return to Birtwistle’s music of a plenitude of assertive, rebellious spirit – particularly in the intrusive, provocatively terse figures from the cello that erupt at the outset and during the last section, which concludes with an effective coup de théâtre as the players retreat to seats at the back and sides of the stage (which, due to the limited space of Le Poisson Rouge’s stage, they had been unable to do), playing expressive repeated figures before individually walking off in a manner reminiscent of Haydn’s ‘Farewell’ Symphony.

Well into its fourth decade, the Arditti members not only lived up to their reputation as arguably the finest interpreters of postwar string quartet repertoire but won a rousing ovation from an audience whose forbearance was rewarded with a superb and memorable program.