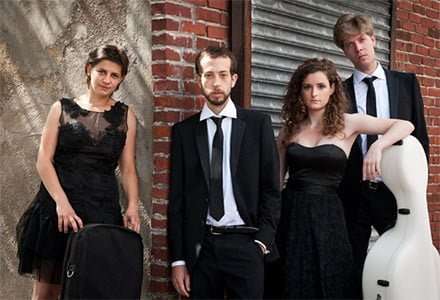 In the first of Joseph Haydn’s six String Quartets collected under Opus 76, the Ariel members exaggerated the music’s drama, as if they were playing Brahms. Surprisingly, this worked, and the performance felt fresh and inspired. Alexandra Kazovsky, who led in the program’s first half, had a small but bright tone that occasionally became shrill in the highest register, but was mostly pleasing. In the Adagio, the players had unified phrasing and an integrated sound, marred only by the noise of the subway audible in this subterranean venue. The Minuet was performed as if it had been written a hundred years later, with forcefully scary subito fortissimos and plenty of rubato in the trio. Kazovsky was fiery in the finale’s rapid triplets, without seeming too flashy.

Alban Berg’s String Quartet, written in 1910, was his first large-scale atonal work. In his introduction, Jan Grüning stated that in common with the programmed Beethoven, the work was only appreciated long after it was written. The Ariel musicians continued to have excellent ensemble, with extremely varied timbres. They managed to retain the music’s intensity through all dynamic levels. Some annoying mannerisms persisted, such as occasional foot-stomping in louder passages, and overly audible inhales as cueing gestures. They maintained a well-blended tone, while allowing certain lines individuality. The piece ended in a blast of ferocity that displayed the players’ extreme confidence.

Beethoven’s B flat String Quartet was presented with its original finale, Grosse Fuge, which Stravinsky called “an absolutely contemporary piece of music that will be contemporary forever.” Gershon Gerchikov took over as leader, and proved how important a role a first-violinist has in determining the success of a performance. It seemed as if an entirely different ensemble was playing. Gerchikov’s tone was weak and strained, and not helped by his occasional eschewing of vibrato. Although the rendition was technically solid, it felt cautious, the players appearing unfamiliar with their roles in the work. There was nothing interesting in the phrasing of the Andante con moto, which came across as exceedingly boring, with minimal dynamic variation. The subsequent ‘Alla danza tedesca’ suffered the opposite problem, with overdone swells in robotic two-bar chunks, losing the longer structure of the phrases. In the ‘Cavatina’, Gershon’s tone became so quiet it was nearly inaudible. Forceful energy returned with a vengeance in the mighty Grosse Fuge. At times, it seemed that each player’s goal was to drown the others out, and no thought was given about which lines to highlight. The result was a frenzied zoo. One could hear why Beethoven’s publisher had suggested replacing it with something more sedate.

Kazovsky returned as leader for an encore, the scherzo from Beethoven’s Opus 18/2 String Quartet, played from memory. It was a return to previous fine form, the players relishing making eye contact. They captured just the right mood, and with great phrasing it was a welcome conclusion.