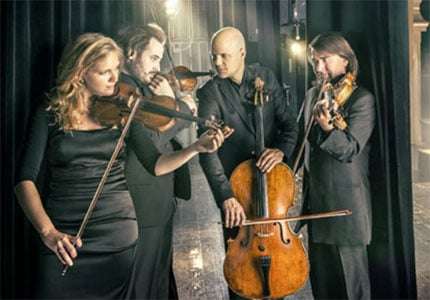 The members of the Berlin-based Artemis Quartet do not make life easy for themselves. Having tackled two of the most demanding works in the repertory, they capped the evening with a full-blooded postscript, the slow movement of Mendelssohn’s Beethoven-inspired String Quartet in A minor (Opus 13) in a performance of almost terrifying intensity.

However, to begin a recital with Opus 131, with its slowly unfolding opening fugue and cyclic structure in seven movements, is a hard ask and tempting fate. Nevertheless, with perfect intonation, a fine tonal blend and a well-judged tempo, the Artemis members – four fully fledged personalities who form a whole – took us confidently to the heart of the matter. Like a Michelangelo sculpture hewn from marble and giving the impression of something as yet unfinished, Opus 131 leaves no doubt that one is in the presence of a masterpiece and yet when experienced in a different light or at a different time it becomes subtly different. In Beethoven’s case the miracle is that this extraordinary music – at one moment cerebral and at another vehemently physical – came into existence encased by his deafness.

With a grandly elevated account of the opening movement (described by Wagner as revealing “the most melancholy sentiment expressed in music”) and a detailed reading of the lilting Allegro molto vivace, it seemed initially that this might be an account which stressed the Apollonian at the expense of the Dionysiac. However, after that curious 11-bar third movement, the rendition really hit stride with the central variations that by the close had had us catching our breath and fully involved in the music’s vast emotional range. The succeeding Presto with its bucolic refrain from cello and viola and the concluding Allegro, a kind of manic Celtic jig, took us fully into the physical world of the dance.

Brahms, notoriously self-critical and weighed down by precedent, had by his own admission discarded some twenty string quartets prior to the first of the Opus 51s. Magnificent though the eventual result, it could hardly be said that it flowed easily from the composer’s pen. The Artemis players with their rich tone and a dash of Slavic intensity produced a near-ideal account, at once tensile and warm in the first movement and with a particularly affecting duet from the violist and the leader in the ‘Romance’, and then a superbly crafted third movement (Brahms’s typically ambiguous marking is Allegretto molto moderato e comodo) whose laconic opening gives the listener the impression of eavesdropping on a conversation already begun. Just before the shadowy half-lit coda there is a wonderful gentle moment, memorably delivered here, for which the word Volksweise might have been invented. The finale, admired by Schoenberg for its logic and economy, is the least immediately appealing of the four but powered to its close with an almost orchestral sonority.