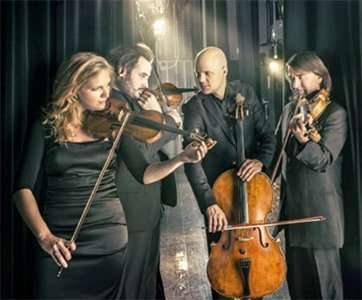 Brahms reportedly destroyed twenty string quartets before finally submitting his two Opus 51 String Quartets for publication. The composer was overwhelmed by the prospect of living up to the standard of Beethoven. He spent nearly a decade revising the C minor work prior to its premiere in 1873. The Artemis Quartet gave an unusually subdued interpretation, lacking rubato and melodrama. In the opening movement, Vineta Sareika’s solo passages occasionally felt rushed, and the coda was taken so briskly that the harmonies didn’t fully register their weight. In the next movement’s louder sections, Sareika’s compact tone was often overpowered by the lower strings, but the phrasing always remained unified, and the pianissimo triplet passages were exquisitely phrased, but the third was the most disappointing in its literality. The forceful finale showcased Friedemann Weigle’s powerful tone, with Sareika again struggling to shine above.

György Kurtág, who recently turned 88, has stated that he hopes to achieve “unity with as little material as possible.” Officium breve consists of 15 short movements, three based on material by his Hungarian compatriot, Endre Szervánszky. Both men were influenced by the music of Webern, and in homage to him the core of Officium breve is an arrangement of the four-part canon from Webern’s Cantata No.2, Opus 31. The Artemis musicians’ performance was the highlight of the evening, giving a work of outstanding originality and poignancy with intense dialogue, speech-like phrases posing whispering questions contrasting with bursts of intense conversation. A section of vertigo-inducing glissando preceded the wistful Webern arrangement, one of the longer movements. The final section, an interrupted quote from Szervánszky, was chilling in its sweet contrast, the dialogue coming to an unwelcome end. Such an intimate piece was unfortunately marred by an extraneous noise, the subway trains passing under the hall. While always a problem at this otherwise acoustically fine venue, it was impossible to ignore in such quiet music.

Beethoven’s Opus 131 String Quartet was said to be the composer’s favorite. Its seven movements, played without interruption, run the gamut of emotional climates. The Artemis players gave a refreshingly raw account, creating an arc connecting the disparate movements. The opening fugue had minimal dynamic contrasts, remaining on the quiet side with little shaping. Accents took on new meaning as they were so rare. The core Andante had a simple purity, the musicians handing fragments of melody as if precious gifts. The following Presto’s intensity remained controlled, but set the stage for the climactic ending, when the players finally let their instruments resonate to the max. Again, Sareika’s violin was drowned out by her peers, a damper in the drama.

As an encore there was an arrangement of the Prelude in E minor from J. S. Bach’s Well-Tempered Clavier (the ‘48’), creating an atmosphere of quiet serenity.