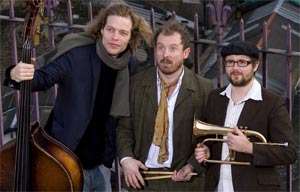 Trumpeter Tom Arthurs is the second jazz artist to be given a place in BBC Radio 3’s New Generation Artists scheme, after pianist Gwilym Simcock successfully completed the programme last year. Given that Arthurs was inspired to play jazz by Radio 3’s “Jazz Record Requests”, it was totally appropriate for him to perform at a mellow BBC Lunchtime Concert, the acoustics of the Wigmore Hall revealing the subtleties of his musical approach.Arthurs plays both trumpet and flugelhorn, the latter offering him a soft, rounded tone that he uses extremely well, at odds with the timbre of the trumpet. Bassist Jasper Høiby plays almost entirely pizzicato, but using different techniques of attack and speeds of vibrato to secure a wide canvas of sound. Meanwhile drummer Stuart Ritchie plays a range of implements and things to shake, from wind-chimes and blocks to a bow for a double bass, which he uses to extract extraordinarily fine pitches from cymbals.Much of Arthurs’s work as part of his Trio is based on improvisation. In this case there were brief, murmured asides to the audience, but the feeling was that Arthurs very much wanted his music to do the talking and set the mood – and it worked. Such an approach made a refreshing change, responding to mood and setting.Each of the pieces succeeded in casting a specific mood through careful attention to the sounds required. Arthurs rarely reached a fortissimo on either trumpet or flugelhorn, beginning with a very soft timbre from the latter. “Expulsion” made more explicit references to influences from Africa, with Ritchie securing a vivid evocation of the wind across the desert plains, first with bow on cymbals and then through very subtle manipulation of the snare drum. A gradual ostinato established itself from the bass before the warmer flugelhorn sound returned.bThe Trio moved on to “Leaps”, the title manifesting itself in awkward melodic contours. The phrase structure was tighter here, making development more obvious.Following this, Arthurs returned to African scenes, softening the dynamic to barely audible levels, in the manner John Cage achieves in his Sonatas for Prepared Piano. The music almost completely stopped as it was stripped back to a single, soft flugelhorn note, exquisite tension helped by the quality of Arthurs’s musicianship. Once again the piece blossomed into something more forthright, this time a marching rhythm ringing out from Ritchie’s snare drum.The musicians ended with as little fuss as they began, performing ‘Miscellaneous Shackelry’, which subsided to buzzing sounds and very soft phut sounds on the trumpet, before gathering itself slightly to the end. Tom Arthurs’s music, an interesting juxtaposition of stasis and movement, was poised and well phrased, improvisation used well within the structures of each piece. It will be interesting to chart his progress during a year of ‘New Generation’ sponsorship.