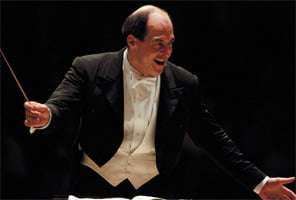 Robert Spano has earned a reputation for daring programming, and this Atlanta Symphony program showed the strong contrasts between the music of three prominent Eastern European composers in remarkable relief.

Arvo Pärt’s Fratres was originally composed for the early-music ensemble Hortus Musicus, and has since been arranged by the composer for many different combinations of instruments. The present version, for string orchestra and percussion, may be the most effective of them all. Slow progressions of long, modal chords played non-vibrato form strophic blocks separated by interjections from the percussionist, first quietly, and then more assertively as the piece progresses and crescendos as the music moves into lower registers. Fratres is a slow-motion minimalist work and no longer holds the magic or impact it had twenty years ago. The strings of the Atlanta Symphony (only about 50 players, as was the case for the Bartók and Janáček) played Fratres with strong technical control, though the stage positioning (very close to the front to accommodate the choral risers) did little to bring out much warmth from the strings, giving the music an unexpectedly bright sound.

The Suite from Bartók’s The Miraculous Mandarin (pretty much the first two-thirds of the score with a high-impact concert ending) was published in 1927, eight years after the then-controversial ballet was premiered. With hard-driven rhythms, demanding solo parts, the music sounds more 20th-century Hungarian than oriental. In this Atlanta performance, there was some less-than-ideal ensemble-playing and altogether too soft-edged attacks and accents from the strings, textures tending to muddy. The wind- and brass-playing was much more impressive – particularly that of clarinetist Laura Ardan, who played with character, bite, and rhapsodic rhetoric. And the percussion cut loose with some high-impact playing, including plenty of bass drum slams, in the impressively-played rapid-fire final section.

Two decades ago, Robert Shaw made a recording of Janáček’s “Glagolitic Mass” in Atlanta that many consider the best from outside the former Czechoslovakia or without a Czech conductor (Sir Charles Mackerras excepted). Yes, the Atlanta Symphony has the classic ‘American’ sound, but the orchestral Intradas and ‘Úvod’ were convincingly idiomatic, excellently balanced and played with spirit (and, at last, the strings were digging in when needed). The Atlanta Symphony Chorus has few rivals in the US. Director Norman Mackenzie has continued to cultivate the ‘Robert Shaw sound’ and arguably even improved the timbre of the choir’s quietest singing, as heard in the more meditative moments of ‘Gospodi’ (Kyrie). The chorus performed ‘Svet’ (Sanctus) with ecstatic energy, but also the grandeur called for – satisfying and surprising. The vocal soloists, particularly the two who have the most music – Twyla Robinson and John Mac Master — had little trouble being heard over the orchestra. Janáček had written about the musical vision of a soprano “maiden angel”, and Robinson’s timbre, which has a glistening upper range and sounds less muscular than many sopranos, seems tailor-made for Janáček’s impression. Monica Groop and Burak Bilgili had noticeably darker voices than their counterparts, and brought suitable gravitas to their emphatic contributions.

Peter Marshall extricated an unusually convincing sound from Carnegie Hall’s long-outdated monstrosity of an electrical instrument, endowing the ‘Varhany’ for solo organ that precedes the final ‘Intrada’ with inexorable assertiveness.

The last few years have seen the major orchestras of the American northeast present occasional helpings of the new and unusual, but much of the programming is banal and predictable. One might assume that such conservatism is dictated by the need for box-office success, but the music directors of these more prominent orchestras would do well to borrow a page from Robert Spano and try the sort of daring juxtaposition the Atlanta Symphony brought to Carnegie Hall and played for a packed house.