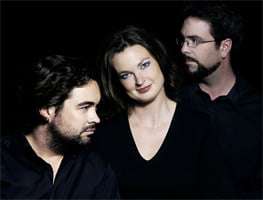 Recently chosen to be part of BBC Radio 3’s New Generation Artists Scheme for 2010 and 2011, the ATOS Trio keeps adding to its impressive list of awards and honors. Formed in 2003, the ensemble was the Grand Prize Winner in 2004 at the Deutsche Musik Wettbewerb, one of the most important chamber music competitions of Germany. In 2006 the young German musicians were awarded First Prize and the special prize for the best interpretation of a work by Schubert at the international competition “Franz Schubert and the Music of Modernity”, and in 2007 they were the recipients of the Kalichstein-Laredo-Robinson International Trio Award. The same year, the trio won First Prize, Grand Prize, the Musica Viva Tour Prize and the Audience Prize at the “5th Melbourne International Chamber Music Competition”. Never before in the history of this competition has a single ensemble garnered this many honors.

Expectations were high when the ATOS Trio took the stage of the 268-seat Weill Recital Hall. And from the very first hushed, yet tension-filled, note of Mendelssohn’s C minor Piano Trio it was immediately clear that this was going to be a special evening. The Allegro energico con fuoco marking was taken at face value, but the ensemble never pushed beyond the limits of the hall, which can become quite shrill. Although the musicians produced plenty of sound when called for, it was with a fire of inner intensity rather than outward flashiness. The lyrical second movement was full of nostalgia, but never lapsed into sentimentality, while the scherzo dazzled with its lightness; the finale, Allegro appassionato, was impassioned as well as serene in the chorale-like sections.

The Piano Trio (1926) of the Spanish cellist and composer Gaspar Cassadó brought out the musicians’ playful side. They revelled in its folkloristic colors and dance elements, as well as playing tribute to the more Impressionistic passages. The second movement was full of contrast, with a beautiful solo by Stefan Heinemeyer, while Annette von Hehn shone in the finale. There are extensive difficult unisons between their two parts throughout, which they dispatched with impeccable intonation.

The concluding Schubert Piano Trio was played in its longest version and including all repeats. In the wrong hands, the composer’s “heavenly length” can get tiresome, but the ATOS managed to sustain interest throughout. Performed in a slightly more genteel manner than the extroverted Mendelssohn, Schubert sang forth with sunny indisposition in the outer movements and the scherzo. The high point, however, was the haunting second movement, where after Heinemeyer’s and Thomas Hoppe’s beautifully played, desolate solos, the texture naturally expanded into the full statement of the theme.

What was most impressive about these three musicians though is their approach to music in general. They are storytellers and musical conversationalists in the finest tradition of elevated musicianship and ensemble playing. In an absolutely quiet hall we were kept at the edge of our seats, barely daring to breathe at times, as they traversed these diverse works with a perfect sense of structure and drama. It was as if we were following a stream down its path, being swept along by swift currents here, enjoying an exquisite moment of beauty there. Every note followed the next inexorably, making perfect musical sense, without any mannerisms or exaggerations. These young musicians not only are technically superb, but they have at their disposal an immense variety of colors and atmospheres which they apply judiciously. In addition, they are intimately attuned to each other, their sound is perfectly balanced at all times, musical nuances are created and passed around, and answers are given to questions asked. In the encore, Kreisler’s Marche miniature Viennois, their collective feeling of rubato was astonishing, their sotto voce playing took one’s breath away, and one felt transported to a Viennese coffeehouse. Following the retirement of the Beaux Arts Trio, the ATOS Trio may well be positioned to take over as the premier piano trio of today.