Artists of The Australian Ballet

Put up the bunting, get on the glad rags and turn up the music! Les Présages has come to town, with Léonide Massine’s 1933 work to Tchaikovsky’s Fifth Symphony coming up fresh in Tatiana Leskova’s wonderfully alert revival. Madame Leskova danced for Massine and staged his ballets for him, continuing to do so after his death and has staged Les Présages for The Paris Opéra Ballet, Joffrey ballet, Dutch National Ballet and the Municipal Theatre of Rio de Janeiro as well as for The Australian Ballet.

Les Présages is a hugely important work, being the first of the ‘symphonic ‘ ballets – dance pieces set to ‘concert hall’ compositions – and thereby opening up a whole world of sound to the dance and which has influenced ballet to this day. What is more important is that, on the evidence of this particular revival, it is a work which can still hold the stage today, and while some may carp at the melodramatic gestures involved, they forget the artificiality inherent in classical dance anyway. 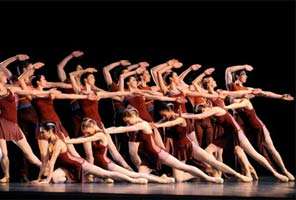 Here Massine turned away from his own demi-caractère style which had been so successful (Boutique Fantasque and Le Tricorne, for example) and delved deeper into his art form. He chose Man’s struggle against the forces of life. The four movements of this famous symphony are ascribed their own ‘virtue’; L’Homme, who is involved in Passion, becomes The Hero in the final War and Peace. If it all sounds portentous, it is not: Massine uses the stage with intelligence, with blocks of dancers crossing the stage, each section performing its own movement, so that when they do all come together, most notably in the human ‘machine’ of the fourth movement, it is all the more potent. The hand and arm gestures are pure art deco – think Italian fascisti sculpture – raised arms, flat palms, angular poses, all root this work in its time, but that is part of its strength. It is also a successful experiment both in form and in choreography: there are moves and ensembles which evoke later works and demonstrate the pivotal role played by this ballet.

The Australian Ballet is a fine company, with some striking dancers; I particularly enjoyed the soft vulnerability of Rachel Rawlins’ Passion (who enters with L’Homme in a move reminiscent of the Dark Angel in Balanchine’s 1934 Serenade) and the light-footed Frivolity of Reiko Hombo, skimming across the stage with intricate batterie, both of whom are given demanding choreography (unsurprising given the stellar nature of the first cast (Riabouchinska, Baronova, Verchinina, Lichine and Woizikowsky!). Marc Cassidy, in green and given a death mask was a powerful figure as Destiny (or Fate as it was originally named), stalking the stage, trying to part the lovers of the second movement and leading the infernal dance of war in the fourth (a close dance relative of Kurt Jooss’ Messneger of Death in his Green Table of 1932). There is much to please and to impress seventy-five years after its inception – I loved the mass shaking of fists at heaven against the injustice of war (MacMillan’s Requiem starts with a similar gesture), the effortless use of the stage and the unerring eye for the stage picture. Add to this the recreated pure Symbolist backdrop of André Masson and you get a worthy and striking period work. 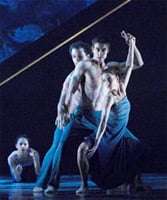 The pendant to this wonderful revival is Stephen Page’s Rites, set to Stravinsky’s still striking Le Sacre du Printemps. It is a magnet to choreographers, who are drawn to its evocation of primeval life and sacrifice, as well as to its spiky and troublesome rhythms. Most have fallen far short of the mark, unable to match their visions with the enormity of Stravinsky’s. In my experience, only two have succeeded in matching good old Igor: Pina Bausch and Kenneth MacMillan; the latter, ironically, created a version for The Royal Ballet in 1962 which is distinctly aboriginal in look and possesses the great Australian artist Sir Sidney Nolan’s backcloths.

Australian Ballet has joined forces with the aboriginal troupe Banagarra Dance Theatre of which Page is the director for this his version. It is a failure. Dancers from both companies work hard but Page is too predictable in movement and has too little choreographic invention to begin to match Stravinsky. More worrying, for a score in which rhythm and its numerous changes are so important, he seems to ride over them, unwilling to respond to alterations of tempi or beat, and often overlaying bland and decidedly gentle movement onto the violence in the score. I felt the whole undertaking to be on the wrong side of cheesy – too many smoking pots and gourds of water, and whitewashed dancers rolling perpetually around on the stage. A pity given that the company’s orchestra gave themselves heart and soul to their performance (as they had done to the Tchaikovsky) under their un-named conductor.