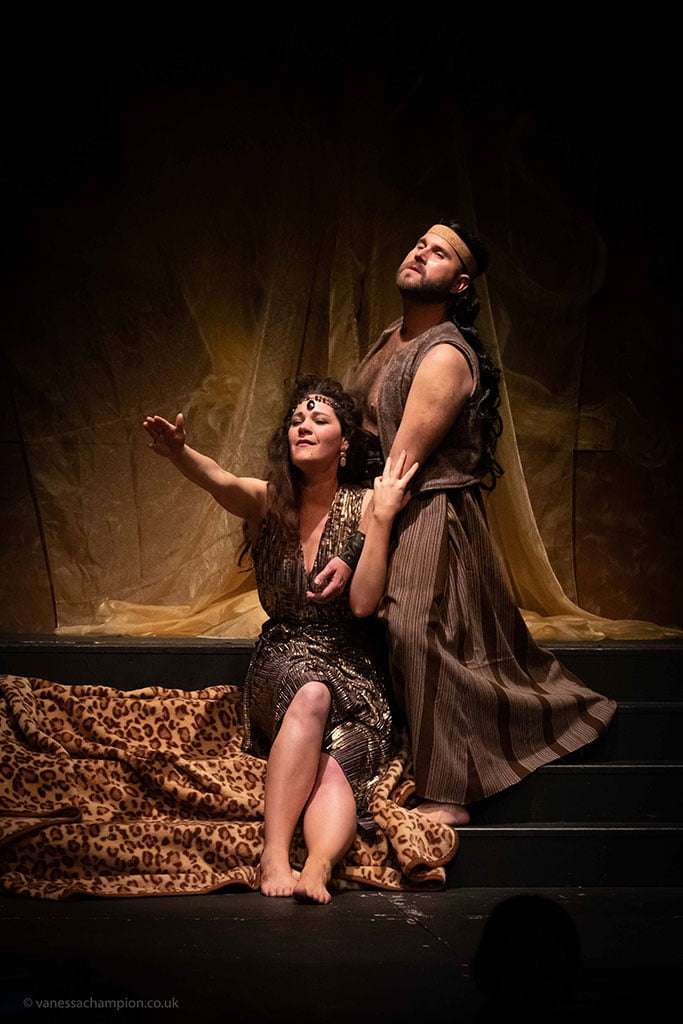 Although Camille Saint-Saëns composed numerous operas, only Samson et Dalila, 1877, remains in the repertoire. The story is based upon the biblical tale found in Chapter XVI of the Book of Judges in the Old Testament, itself based upon the conflict in Canaan between the Hebrews and the Philistines between 1200 and 1000 BC. Samson, the biblical superhero, is empowered with godly superhuman strength that is lost when his hair is cut by seductress Delilah.

Aylesbury Opera engages professional soloists and conductors – that may turn into a real discovery and ones that you knew before they were famous. Brian Smith Walters (Samson) and Christie Cook (Dalila), the former conflicted, the latter brazen, were an excellent coupling – most notably in Act Two which they have almost entirely to themselves. ‘Mon Coeur s’ouvre à ta voix’ (Softly awakes my heart) – one of the most-popular mezzo-soprano arias – was performed with aplomb, in spite of the orchestra getting a little lost.

Andrew Mayor, was convincingly devious as the High Priest, in this production clearly with his sights on Dalila as a lover as well as accomplice. Dancers from the Attitude School of Dance in Milton Keynes gave a polished, if under-tempo, appearance that was full of Eastern Promise in the Act Three Bacchanale.

The chorus, well-trained, and with some excellent voices elevated the sound to something quite special. The a cappella fugue in Act Three (Vois ma misère, hélas! Vois ma détresse!) was particularly notable – balanced and strident singing here is required and was delivered.

Sadly, the orchestra was the weak link on this occasion. A tiny string section of five violins, two violas, two cellos and a double bass would rarely ever work, even with the most gifted musicians. Space was the limiting factor here and, on the whole, the sound when everyone was playing together was well-rounded. However, in the more exposed passages, too few numbers meant the string sound lacked suitable depth.

This production is very much in the amateur-dramatic mould – where amateur means something done for pure enjoyment. While there are undoubtedly some rough edges, Aylesbury Opera’s production brings a great deal of enjoyment to performers and audience alike.