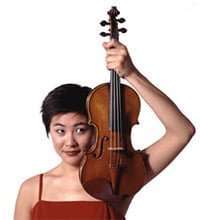 Jennifer Koh alongside her mentor Jamie Laredo gave this “Bach, Revisited: Two x Four” concert – with four two-violin concertos, the inspiration being J. S. Bach’s example, which Koh first played with Laredo when a student at the Curtis Institute in Philadelphia. The soloists performed with obvious affection for each other and for the music. They took the outer movements at a brisk pace, evoking passion and playfulness. Although their phrasing and articulation were well matched, Koh’s warm tone was superior to Laredo’s shrillness. Koh rendered every note with clarity, but in faster passages Laredo’s playing became blurred. The heart of the piece is the Largo, where Koh took the second-violin part with rich tone and Laredo underplayed the top line, allowing his protégée to shine. The Curtis Chamber Orchestra, strings with added harpsichord, provided a sensitive accompaniment as it followed the soloists’ lead.

Philip Glass has written of Echorus: “The music is inspired by thoughts of compassion and is meant to evoke feelings of serenity and peace.” It’s a chaconne featuring Glass’s trademark arpeggio patterns in the ensemble, a hugely resonant sound, with the solo violinists playing simple, plaintive melodies, although their occasional shunning of vibrato sounded weak and detracted from the piece’s meditative beauty.

The concert continued with two works written for Laredo and Koh, one by David Ludwig and the other by Anna Clyne. Ludwig explained that he had revised his work, altering its title from Seasons to Seasons Lost to pay tribute not only to a year’s cyclical passing but to changes created by extremes of weather. Ludwig also mentioned numerology – each movement being associated with both a season and a digit. ‘Winter (unum)’ is bleak and sparse, with some haunting dissonance to enhance the eerie mood, the soloists’ lack of vibrato apt. ‘Spring (duo)’ proved a hopeful dialog, culminating in the excitement of tremolo bowing while ‘Summer (tertius)’ was surprisingly dark and wistful, a minor-key tonality alluded to but not embraced, the orchestra becoming an entity in itself, adding to the intensity. ‘Fall (quartus)’ begins as a virtuosic display for the violinists, with an alternating slower section that is romantic in its unabashed passion. Koh sometimes elicited an ugly tone serving the composer’s message, emphasizing destruction.

Clyne was also inspired by Bach’s ‘double concerto’, her approach in Prince of Clouds being to deconstruct and rebuild the solo parts. This atmospheric work alternates between slow music, the soloists playing overlapping melodies above serene padding in the orchestra, and fast sections featuring crunchy chords and dramatic rests. The piece requires the players to employ many unusual techniques, such as snap pizzicatos and bowing across the bridge. The result was pleasant but bland, such effects displaying only the composer’s knowledge of string technique.

Laredo returned to conduct Tchaikovsky’s Serenade for Strings and drew a big sound from the small ensemble, the violins in particular being stunning in their forcefulness and unified expression. Laredo washed over subtleties yet was redeemed by the players’ youthful enthusiasm. The second-movement ‘Waltz’ could have used more breathing space, and the first violins were relentlessly bright in ‘Elégie’, but they attacked the finale with joyous gusto.