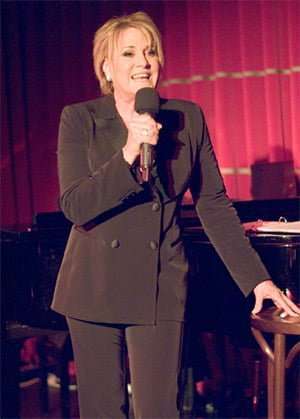 One of the great belters is back in town, and for those who like their music brash, brassy and rafter-shaking, The Crazy Coqs is the place to be. Lorna Luft is the daughter of Judy Garland, and the younger sister of Liza Minnelli, and it is piquant to imagine what the three of them might have done with something like the trio arrangement of ‘Sing for your supper’. Lorna is less reminiscent of Garland than Liza is, her voice having its own husky individualism, and though one has difficulty detecting much vulnerability, it surfaces occasionally in such ballads as ‘By myself’, a song she delivers after talking about the serious illness she recently got through and the new perspective it gave her on life.

Ably backed on the piano by her arranger husband Colin Freeman (they were married in 1996), Luft performs a splendid programme of standards with the emphasis on crediting lyricists, a nice idea, though it was an unfortunate oversight to omit a mention for composer Jule Styne who wrote the melodies for the three songs Lorna featured with lyrics by Betty Comden and Adolph Green – ‘Once in a lifetime’ from Subways Are For Sleeping, ‘Make someone happy’ from Do Re Mi, and ‘Just in time’ from Bells Are Ringing, the latter a superb arrangement by Kay Thompson for Garland. Luft’s recreation of it is a showstopper as she negotiates the half-dozen or so key-changes that it demands.

Occasionally, she puts two songs together to considerable effect – ‘By myself’ leads into Kander & Ebb’s ‘My own best friend’, and after telling us just how “pissed off” she can be with men, she couples two Jerry Herman numbers, ‘So long, dearie’ and ‘Wherever he ain’t’. She reveals that Herman wanted Garland to star in the film version of Mame (if only…) before singing an impassioned version of ‘If he walked into my life’. Herman was aware of just how funny Garland could be, and Luft displays her own sense of humour in her anecdotes and in such numbers as Cole Porter’s ‘Let’s do it’, with a touch of Mae West when she informs us that folk in Siam do it – “think of Siamese twins”. She gives an extensive tribute to Dorothy Fields, including the tender version of ‘I can’t give you anything but love’ that her mother used to sing, plus ‘The way you look tonight’ and ‘I’m a brass band’.

Luft acknowledges the time of year by starting her show with ‘Happy holiday’, weaving her way through the audience in a black trouser-suit as she addresses her greetings and points out that her mother had a seasonal song written especially for her, the tender ‘Have yourself a merry little Christmas’. Irving Berlin’s ‘White Christmas’ is a clap-along closer, and she also gives us Berlin’s ‘Blue skies’ and ‘Let me sing and I’m happy’. Luft also includes a piece of special material she has performed often, acknowledging the many terrific numbers that were not nominated for an Oscar. Near the end of the 90-minute show, she delivers a powerhouse rendition of one of her mother’s hits, ‘Rockabye your baby’, her energy still at full throttle, demonstrating that she is indeed “back in business”.