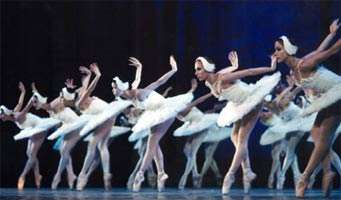 I must start by saying that it is a real pleasure to have the National Ballet of Cuba back in London. The legendary Alicia Alonso’s troupe is packed with dynamic dancers with superb training and real star quality; however the works in which they are showcased leave much to be desired. Just as Che Guevara looks out forever young and bearded from yellowing posters across Havana, the production style and quality of this company is frozen in time, as if the past fifty years of changes and progress in dance have passed them by (in many ways they have).

Alonso’s Giselle, which has been seen in London in seasons past, benefits from a certain period approach, and it is a successful work in the company repertory; Swan Lake is most definitely not a beneficiary of this approach. Stage sets and costumes which look as if they have come from a touring production of Camelot do not help this work in any way.

Admittedly, the Cubans have a different colour palette from that which we are used to in more northern climes and, it can be argued, a certain colourfulness is needed for the evocation of late medieval Germany. However much one might argue this, there is no escaping that some of these costumes look straight from a Stanley Baxter Christmas Show spectacular – the poor Act III Czárdás men wear white jerkins barely long enough to cover their modesty with faux fur trim and magenta and gold highlights. Sets were of the harmless painted drop variety (the lakeside scenes had a disarming bosky simplicity to them).

But no-one goes to Swan Lake for the sets. Alonso has never resisted fiddling with choreographic texts, so it comes as no surprise that a version ‘after’ Lev Ivanov and Marius Petipa emerges as quite a long way after. Act I is unrecognisable and even the sublime Petipa pas de trois only has enough of Petipa to make one regret the rest.

The major gripe with all of this is that Swan Lake contains a great deal of non-classical dancing, mime etc, but Alonso has introduced more and more athletic leaps and turns and tricks and fireworks in their stead, with predictably diminishing returns.

Prime offender is the part of the Jester, who, in all productions of Swan Lake should be strangled before the overture, but the Russians like a good jester bouncing away and gurning at the audience, and good old Cuba follows where Russia once led. This jester was particularly annoying (can someone tell me why he wears Gay Lib stripes in Act I – what sort of a court is this?). He not only bounces his way around the stage, like Tigger in perpetuum mobile, but is always sticking his nose into everyone’s business, always getting into any grouping, always pointing and commenting and gurning. Poor Osiel Gounod is clearly a superb dancer, with great line and technique to spare, but someone should tell him that so much grinning and leering is a tad too much even for the Jester. Additionally, a handsome black dancer, he had to whiten up his face, thereby setting the cause of race relations in ballet back by 50 years.

Cuban superstar dancer Carlos Acosta’s nephew Yonah led the adulterated pas de trois, displaying much talent, superbly pointed feet and impeccable turns and jumps. I liked the Queen Mother (despite her looking younger than her son Siegfried), all the more so when she thrust the Jester aside when he got too close – I’m all for absolute monarchy if they do that sort of thing.

I am not going to go into the intricacies of the production in Act III, when, inexplicably, the Black Swan pas de deux takes place on an empty stage (Siegfried’s imagination, a dream conjured up by the evil Von Rothbart? Who knows?) Suffice to say that the national dances were full of circus tricks (jumps, turns etc. etc.) and the aforementioned Stanley Baxter as Sonja Henie costumes, and therefore seemed less dull than usual despite the Cuban dancers understandably not having the foggiest about the subtleties of the Polish Mazurka or Hungarian Czárdás.

But to the lead couple. I really liked Javier Torres as Siegfried. His technique isn’t the flashiest in the company, but he looks like and moves as a prince, his silhouette evoking a type of danseur noble now all too rarely seen on the ballet stage. He did his virtuosic numbers well enough, but the greatest pleasures were from his superb partnering, his noble bearing and his understated acting.

Anette Delgado impressed greatly as Odette/Odile, her white swan graceful, eyes large and mournful, delivering adagio dancing of the highest order. Her Odile was characterised by sharp and quick movement and she duly delivered in terms of being an exultantly nasty evil seductress. For the record she tossed off thirty-two superb single fouettés.

The Orchestra (for that is its name) played noisily and unsubtly under Giovanni Duarte’s extravagant baton. Perhaps they like their Tchaikovsky loud and brash in Cuba.