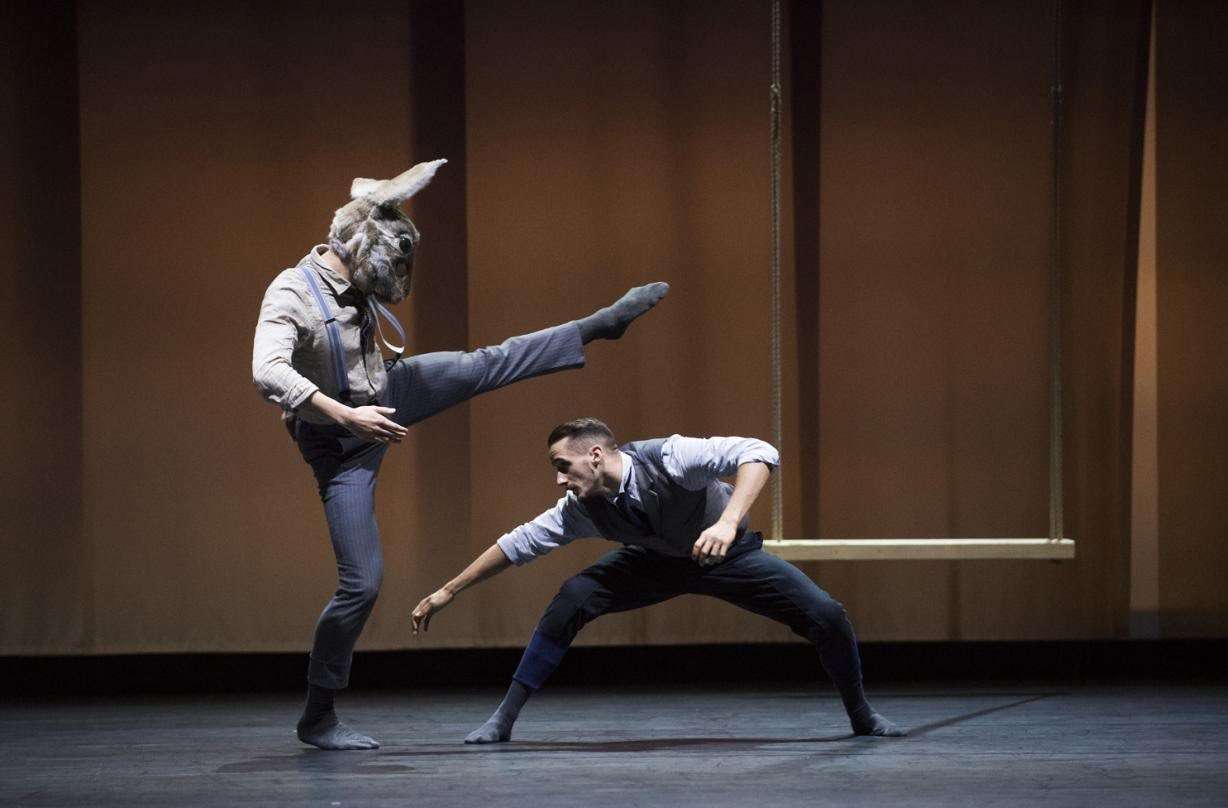 BalletBoyz continues to be a notable ensemble, supported by a strong concept and clear artistic vision; ex-Royal Ballet Principals Michael Nunn and William Trevitt have made it their focus to promote young male dance talent through this group, and, on the evidence of their latest double-bill of newly commissioned works, their efforts are paying off handsomely. Ten men dance in each of two very different works, the first, Rabbit, a typically mysterious, opaque piece from Pontus Lidberg, a Swedish choreographer who has already established a strong international profile. The second is by Javier de Frutos, a somewhat more established figure on the British dance scene who has offered creations of wildly differing natures and levels of success; it is with no little pleasure to report that his latest work, Fiction, is most definitely at the positive end of that wide spectrum.

Lidberg explores loneliness and exclusion in an intriguing work Rabbit, set to Henryk Górecki’s quixotic Requiem für eine Polka, a work of ever-shifting tone which allows the choreographer to establish changes of mood in this excellent work. One dancer, the expressive Bradley Waller, opens the work by dancing with another sporting a rabbit’s head. It is a tender, soft pas de deux characterised by seamless lifts and effortless counterbalance, and the spectator is immediately intrigued. Eight other rabbits roll onto the moonlit box set and dance and shift from bunny to human in a constant shifting of roles and personas. Who they all are and what is happening is never made explicit, but what becomes clear is a deep yearning quality in Waller and a desire to be part of a greater community. The dancers, in mixed 1920s attire – schoolboy shorts and long socks to waistcoats and ties – shift and change constantly, Lidberg giving just enough away but no so much as to make anything literal. It is a dreamy, almost surreal piece shot through with melancholy and, especially in Górecki’s mad, raucous central section, absurdity. 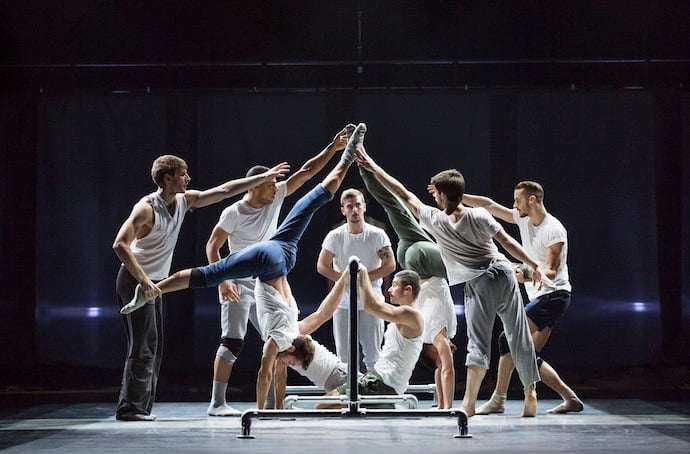 As a counterpoint de Frutos’s Fiction it is perfect, the dancers able to revel in two entirely different aesthetics and movement qualities. Where Lidberg is subtle and intriguing, de Frutos is more full-on, revelling in the physicality of the male ensemble at his disposal. The concept is the announcement, made several times in differing tones, by different voices, of de Frutos’s own death in a freak stage accident. With a sturdy ballet barre ever present, the dancers, clad in practice clothes, use it to dance at, on, under and around in every combination and way possible. It is a dizzying experience, de Frutos’s inventiveness attaining virtuosity as again and again he surprises in his way of using his dancers, emotions of distress, exhilaration, loss and anxiety bubbling to the surface in an ever-changing patchwork of mood and focus. If there is a central character, it is the diminutive Marc Galvez, who is often the object of the displeasure, exclusion, even bullying of the pack, and mentality sared by the others. He is a powerful dancer, able to draw attention to himself yet remain part of a closely-knit ensemble – it is he who is left alone, jigging to Donna Summer in a final tableau of hope. Ben Foskett’s score is tremendous, confident, bold and utterly engaging, providing a powerful sound world for the scenic concept.

What is impressive in this double bill is not only the ensemble dancing of a group of heterogenous men but also the understanding that both choreographers display not only of male dancing and mentality but also the male body itself and the specific physicality inherent within it.