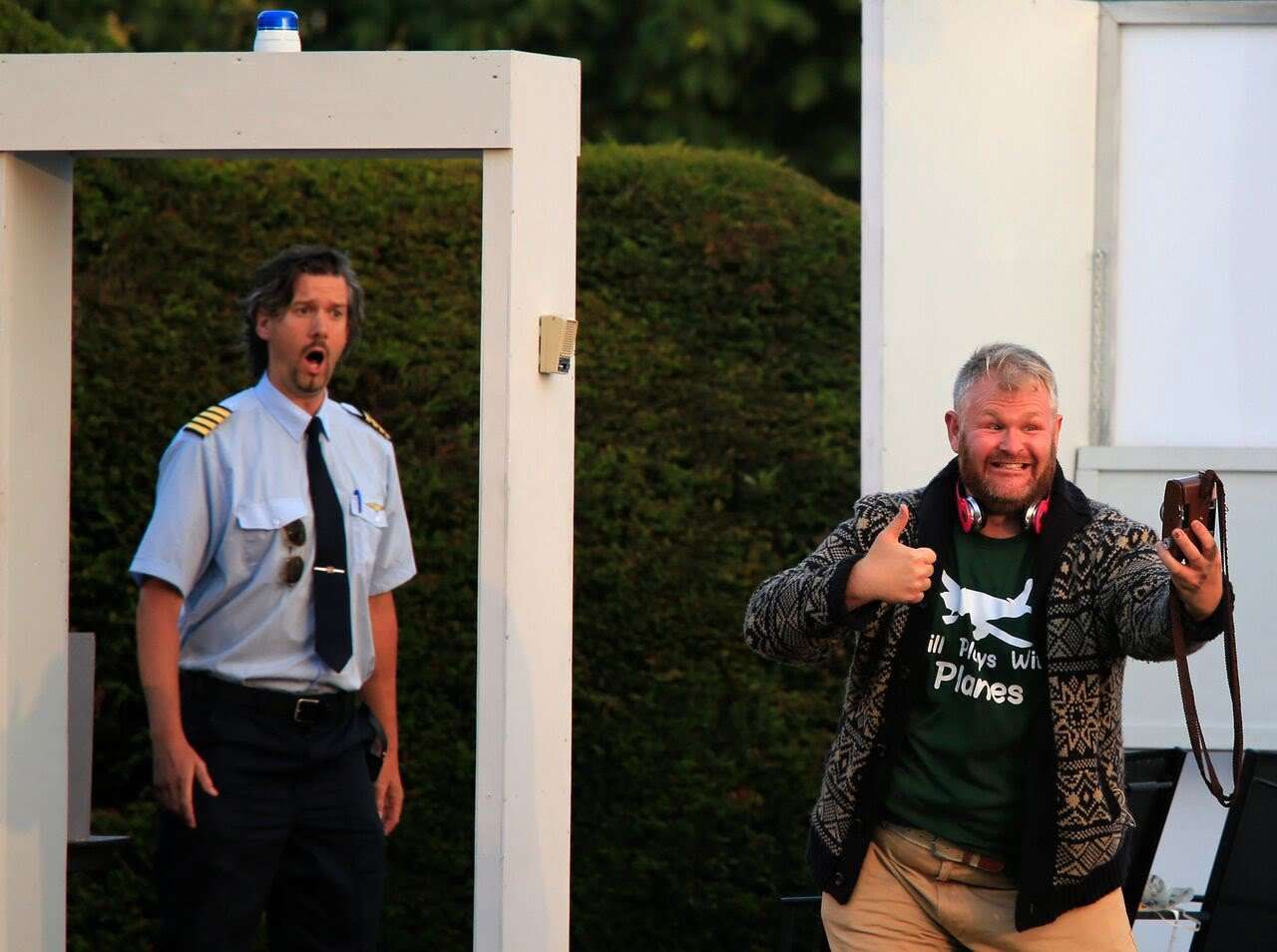 Operating in the delightful setting of a private garden in Oxfordshire, Bampton Classical Opera mounted this programme of “Divine Comedies”, producing two charming stage-works which concern the disruptive intervention of the classical deities in the affairs of mortals.

Jeremy Gray’s production perhaps took inspiration by looking above to the open skies – and perhaps to nearby RAF Brize Norton – by setting both pieces in the context of an airport or aeroplane. In doing so that concept of travel into and out of the heavens surely also made them more intelligible regarding the metaphysics of mythology with its fantastical theophanies.

In Gluck’s Philemon and Baucis (with this believed to be its first staging anywhere since its premiere in Parma in 1769, composed to an Italian libretto as part of the festivities for the wedding of Duke Ferdinand of Parma and Archduchess Maria Amalia) Jupiter appears disguised as a traveller, albeit an uncouth 21st-century jet-setter, and the happy pair of named lovers are workers in the airport at which Jupiter lands. Christopher Turner sang that part with good humour and swagger, boisterous but not bluff, and maintained a sense of the character’s latent authority, which is eventually revealed such that he presides over the lovers’ wedding with Catherine Backhouse and Barbara Cole Walton, the former singing with unaffected charm and the latter demonstrating extraordinary control and agility in the taxing coloratura of her aria (comparable to the music Mozart provided for Aloysia Weber in ‘Popoli di Tessaglia’, though in her cadenza Cole Walton parodied the Queen of the Night’s aria!). 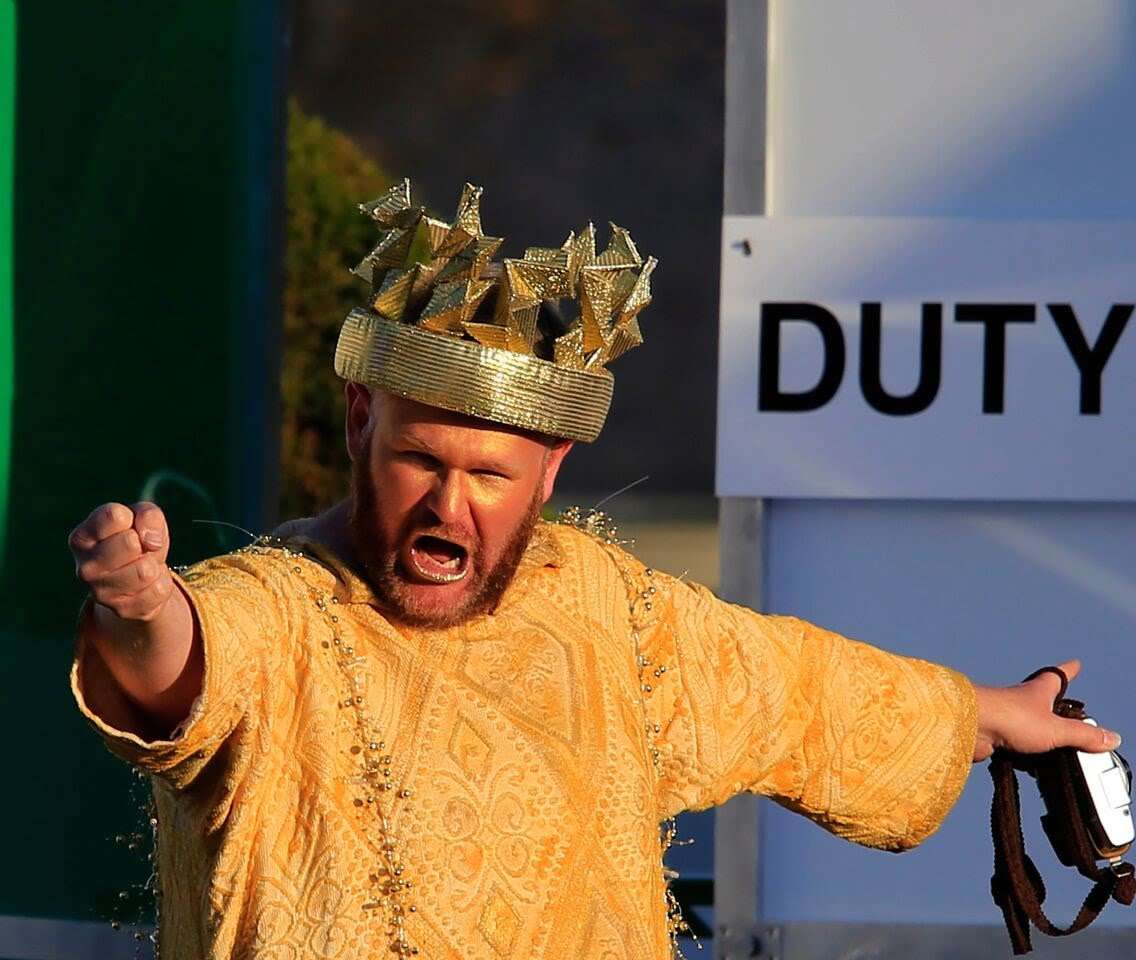 This production and Peter Jones’s edition bore amusing references to the immediate surroundings of its performance making it an even more appealing prospect than it would otherwise have been. Jupiter made ironic allusions to the things which cause most anxiety to summer-opera audiences – the weather and the provision of champagne. When Jupiter reveals himself and promises to create a temple, he gestured towards Bampton’s church, visible beyond the gardens, and an Anglican context was ingeniously suggested for the wedding by applying the words of Charles Wesley’s great hymn ‘Love divine, all loves excelling’ (with scarcely any modifications) to the chorus which Gluck composed at this point. The theology of those words fitted remarkably well the dramatic device of Jupiter’s appearance on Earth.

Gray takes the audience back up into the air for Thomas Arne’s Judgment of Paris, first by drawing a common thread with the Gluck and establishing an airport setting by having an actor perform a wry little sequence as an air-traffic controller during the Overture. Mercury becomes an official in the security check, and Paris is a passenger who is required to choose between the on-board hostesses, Juno, Pallas Athena, and Venus.

Admittedly Paris is a Masque, rather than a fully-fledged Opera, but it was realised with less dramatic imagination and panache than the Gluck. Nevertheless the three lead females were distinctively characterised, in their differently coloured uniforms, by Cole Walton, Backhouse, and Aoife O’Sullivan. Where Cole Walton was haughty and Backhouse imperious, O’Sullivan (who eventually wins Paris’s affections) combined something of both of those qualities with a requisite strain of sensuous, even lascivious, charm. That versatility made it convincing that the feckless Paris would choose beguiling beauty above anything else. Turner again showed much musical charisma in that part, as did Robert Anthony Gardiner as Mercury, even if he was insecure in the upper range of his singing.

Fewer than two-dozen members in the Orchestra provided a lean accompaniment to the action under Paul Wingfield’s conducting, though with an often-prominent continuo sometimes close to unbalancing the texture. But otherwise they brought a due sense of vigour and purpose to the two scores, even in the odd number which felt too long (a fault of the composers).

Summer-opera performances may abound, but Bampton rings the changes on account of its effective and witty adaptation of some rare repertoire, performed al fresco in a setting which mankind could hardly contrive to make a more harmonious combination of nature and artifice.