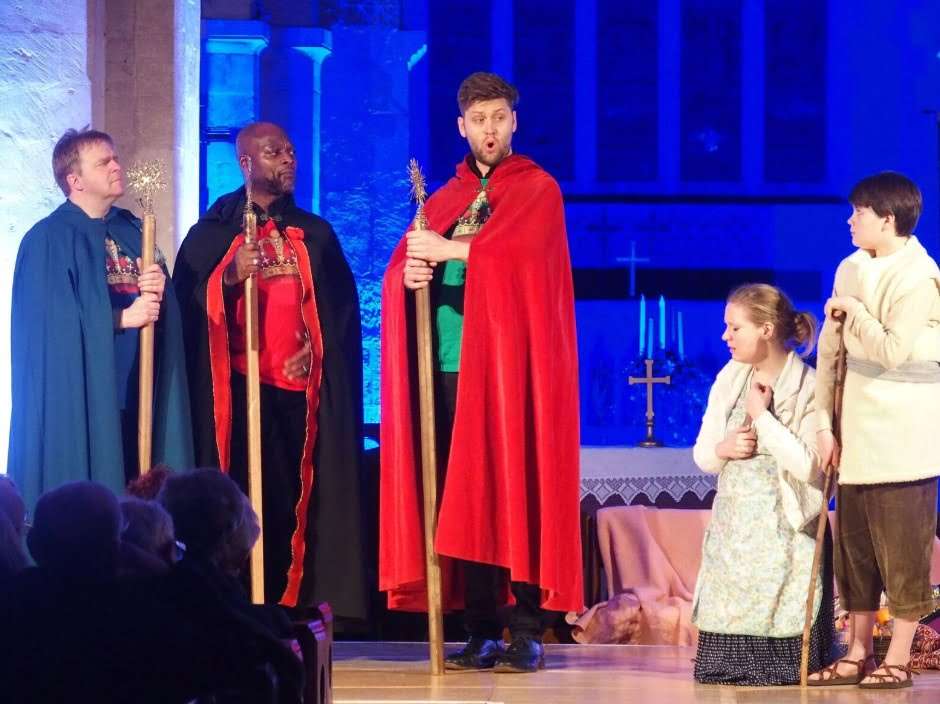 Bampton Classical Opera’s annual Christmas concert this year took in a whole stage-work. Gian Carlo Menotti’s Amahl and the Night Visitors was premiered on American television in 1951, the first opera written specifically for that medium, and has been a favourite on that side of the Atlantic since, but it has never really caught on in the UK. That is curious given its short duration and small scale, as it would not tax resources and is a melodically attractive score that builds up a distinctive atmosphere in each scene through playing around with themes and motifs, and as an intimate music-drama it is comparable to Britten’s Noye’s Fludde, the Church Parables or, closer still in terms of its Christmas theme, Saint Nicolas.

Jeremy Gray’s production made effective use of the sizeable parish church of St Mary’s, with blue and purple lighting effects to evoke the winter night in the time immediately after Christ’s birth, and the starry sky projected onto the walls over the raised stage. The venue undoubtedly gave the performance a hallowed solemnity, with a sense of dramatic presence created by the procession of the Three Kings up the nave to the stage before the central crossing tower, and the chorus of shepherds emerging from, and later receding into, the darkened transept. This production deftly availed itself of all the elements of theatrical display, as Karen Halliday choreographed a lively dance for the shepherds to perform as an entertainment for the Kings after their arrival at the house of Amahl and his mother, on their way to the Christ-child in Bethlehem. 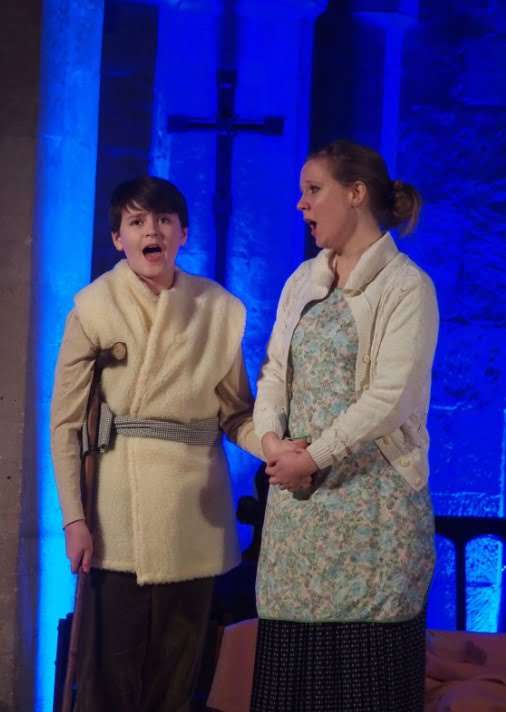 As specifically instructed by Menotti, the part of the young crippled shepherd, Amahl, was taken by a boy, rather than a woman, in this case Felix Gillingwater. Despite the boy’s active and mischievous imagination – which is the cause for incredulity on his mother’s part when he does see a marvellous star in the night sky, and three crowned Kings appear at the door – Gillingwater sang the role with unwavering and pure-voiced innocence, but with a dramatic effectiveness that showed real flair for the stage beyond his purely musical abilities, honed as a chorister at Southwark Cathedral. Emma Stannard was the Mother expressing both tender concern for Amahl and distress at their extreme poverty which caused her to sell the flock of sheep that has left Amahl without any meaningful vocation. In a nod to contemporary compulsions which lead people to gamble, at the opening she desperately scrubbed away at a scratch card that all too predictably yielded no prizes. Stannard transcended the generally syllabic setting of the words with her sustained and well-projected account.

That was also true of the Kings, who are not given any extended lyrical passages, still less arias, but provided well-characterised interpretations: Nick Sales a witty account of the hard-of-hearing Kaspar, Samuel Pantcheff and Robert Winslade Anderson authoritative as Melchior and Balthazar respectively. Xavier Hetherington offered a more lithe-toned performance as their Page.

Menotti arranged the two-piano version used here, and in which Anthony Kraus and Keval Shah provided colourful but integrated and sensitive support. 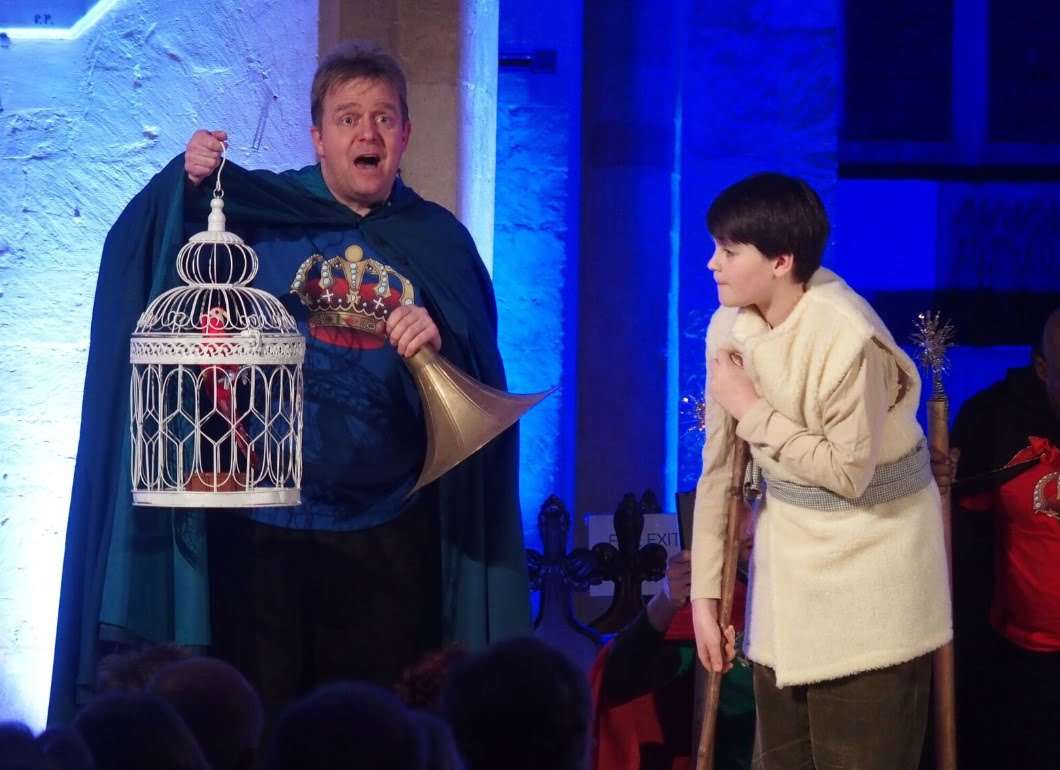 The first half of the concert explored the theme of the three Kings, Magi, or Wise Men (call them what you will) and the guiding star in some popular seasonal works, the audience invited to participate in the carol ‘As with gladness men of old’. We were also encouraged to join in the jaunty chorus between the verses of John Rutter’s ‘Star Carol’. That came between two sedate pieces, Peter Cornelius’s ‘Three Kings from Persian lands afar’ with the baritone line taken mellifluously by Sam Young, and the folksong-like ‘The road to Bethlehem’ by Michael Head. ‘When Jesus our Lord’ from Mendelssohn’s fragmentary oratorio, Christus, quotes the same chorale (‘Wie schön leuchtet der Morgenstern’) used in Cornelius’s piece (and a Bach Cantata, BWV1) and bears a similar liturgical character as S. S. Wesley’s Anglican church anthems with its sequence of recitative, solo and chorus sections, but here it was imbued with more theatrical urgency.

Lastly, in Vaughan Williams’s Fantasia on Christmas Carols, the percussive quality of the piano accompaniment missed some of its pastoral-mystical quality, but Shah played it with great sensitivity nonetheless conjuring a mood of mystery and wonder in the medley of carols which the composer adapted. Pantcheff projected those boldly, if with some skewed vowels, supported by the more measured and veiled textures of the chorus.

This varied programme, then, happily rang the changes, and made a good case for the three bigger works by Menotti, Mendelssohn and Vaughan Williams that they could be presented to audiences profitably and more frequently, whether by professionals (like the performers here) or amateurs.