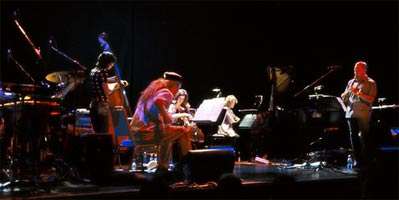 Bang on a Can was founded twenty-four years ago by a small circle of composer-performers – David Lang, Julia Wolfe, and Michael Gordon – whose work broke strongly from the still-predominant ‘academic’ new-music style, incorporating minimalism, tonal centricity, rock instruments, and amplification, and quickly became a ‘downtown’ alternative chamber-music phenomenon at smaller venues including New York’s Knitting Factory. Their goals were to commission, present, and promote accessible new music for small ensembles, and have become a major force in contemporary music.

Bang on a Can All-Stars (with guitarist Derek Johnson subbing for Mark Stewart), kicked of the 25th-season before a near-capacity Zankel Hall audience, predominated by hipsters from their 20s through their 50s. The beginning of the concert was delayed when the concert in Carnegie Hall’s Stern Auditorium ran longer than expected, and out of deference to it – and in tacit admission that there remains a serious problem with sound leaking from the downstairs venue into Carnegie’s main hall – David Lang marked time with a funny, impromptu speech about the series.

The music on the program’s first half was more pictorial and varied in mood and tempo than that which followed intermission. Lang’s sunray, inspired by mornings near the group’s summer residence in the Berkshire Mountains (and the big sign outside his window for “SUN Cleaners” in North Adams, Massachusetts), glistens with Philip Glass-like ostinatos that morph and transform around scintillating melodic fragments. Michael Gordon’s for Madeline, written in memory of his mother (who would frequently bring him to concerts as a child), may be the most energetic musical kaddish ever written, with mournful moments yielding to youthful outbursts giving way to meditative moments.

Most impressive was the American premiere of Louis Andriessen’s Life, which accompanies a four-part film by Marijke van Warmerdam. The first segment of the film depicts an urban-scape of industrial and warehouse buildings, the wind blowing leaves and litter, and defiant growing plants. The constantly moving camera was accompanied by music both meditative and sweeping. The score for the second and fourth segments maintains a similarly restrained mood for an elderly couple sitting on a bench on a grassy, overgrown lawn overlooking a pond. The scherzando third movement, accompanying what looks like Venetian blinds being disturbed by something running up and down, was puckish, jarring, and almost too short.

Lang joked that the second half of the concert was the loud portion, and the works – all showing the influence of rock and electronics – were more ‘amped up’ in both volume and energy. David Longstreth, the driving force behind the avant-pop band Dirty Projectors, mentions Stravinsky and Mahler as two influences on his early compositions; flashes of the former composer’s style are mashed up with rock and pop elements and a dash of Frank Zappa in the three short works, which the All-Stars played with bravado. Australian composer Kate Moore, a student of Andriessen, successfully created an ominous and grand aural rhapsody in Ridgeway, named after an historic pathway in southern England, but also exploring the composer’s own path, which has brought her to America, England, and Amsterdam. Minimalist figures yield to song-like ensembles and glissando-heavy soliloquies, slipping with surprising effect in and out of tonal centers.

It turns out that György wasn’t the only Ligeti influenced by African music. Lukas Ligeti’s Glamour Girl draws on percussion rhythms of Uganda and Burkina Faso. A drummer opens with a 6/8 ostinato to launch a fusion of minimalism, rock, Brazilian jazz harmonies and Afro-pop rhythms. I heard the All-Stars play it a few years ago; this performance seemed even more rhythmically compelling, the Reichian piano figures contrasting even more strongly with the loose pop-band rhythms of the rest of the ensemble.