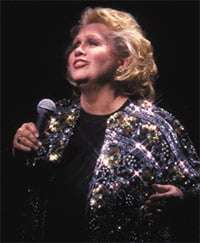 Barbara Cook’s musical love-affair with her adoring public continued here at a 90-minute concert (without intermission) that included songs by such luminaries as Stephen Sondheim, Rodgers and Hart, Rodgers and Hammerstein II, Jerome Kern and Cliff Edwards. At the age of 80, Cook’s lovely lyric-soprano voice has lost none of its expressiveness, pizzazz, and allurement. Her stamina was astonishing. This celebratory birthday concert was the third since last November with the New York Philharmonic.

She sang 23 songs and told anecdotes or gave information about each one (the songs were not listed). Her charisma and charm were were evident. A robust performance of the Overture to Leonard Bernstein’s “Candide” started the evening. Lee Musiker is truly a Renaissance man of music who has involved himself in various genres: jazz, classical, pop, and Broadway. During the concert, he displayed his pianistic virtuosity by playing the majority of the piano accompaniments; he also did most of the conducting from the piano. He even played standing up during Cook’s wonderful rendition of Mercer’s “Ac-cent-tchu-ate the Positive”.

Cook, this ingénue of Broadway musicals – for example, Cunagonde in “Candide” and Marian the Librarian(for which she received a Tony Award) in “The Music Man” –dazzled with her version of Rodgers and Hammerstein II’s ‘I’m in Love (with a Wonderful Guy)’ from “South Pacific”. Cook’s adoration of Sondheim’s music was evident in ‘I Wish I Could Forget You’ from “Passion”. The song of unrequited love poured out effortlessly but emotionally. The longest and loudest applause was for ‘No One Is Alone’ from Sondheim’s “Into the Woods”. When Cook sang “Witches can be right, Giants can be good”, I believed her. Her uncanny way of connecting to an audience again showed itself in Sondheim’s ‘One More Kiss’ from “Follies”. In this song, Cook’s full vocal range came into play, with a lustrous middle and effortless movement into her pleasing lower and higher ranges. Her voice and body-language realistically conveyed a last kiss between two lovers parting forever.

‘Lover, Come Back to Me’ from Rodgers and Hammerstein II’s “The New Moon” was bouncy and jaunty; Musiker’s piano-playing for this song was sprightly and energetic, and the bassist, Peter Donovan, accompanied with panache. In Kern and Hammerstein II’s ‘Nobody Else But Me’ from “Show Boat”, pianist Ted Sperling strutted his stuff. He and Cook were in complete synchrony – every emotional nuance in the singer’s voice was simultaneously replicated on the piano.

From Irving Berlin’s “Annie Get Your Gun”, Cook sang ‘I Got Lost in His Arms’, a song with a powerful crescendo that the singer handled with ease. In Ruby and Bloom’s “Give Me the Simple Life”, she sang with verve and effectively did a bit of scat and had fun with Cliff Edwards’s (a.k.a. Ukelele Ike) “My Dog Loves Your Dog”, yipping and barking along the way. This eclectic evening of song ended with an encore of the superb ballad “We’ll Be Together Again” by Carl Fischer and Frankie Laine; it was sung without a microphone, thus ending the evening on an intimate note.

Percussionist James Saporito never overpowered Cook’s singing and the New York Philharmonic was at full strength and did an admirable job of ‘accompanying’. The big-band sound required for some of her songs was evident in the orchestra’s playing.