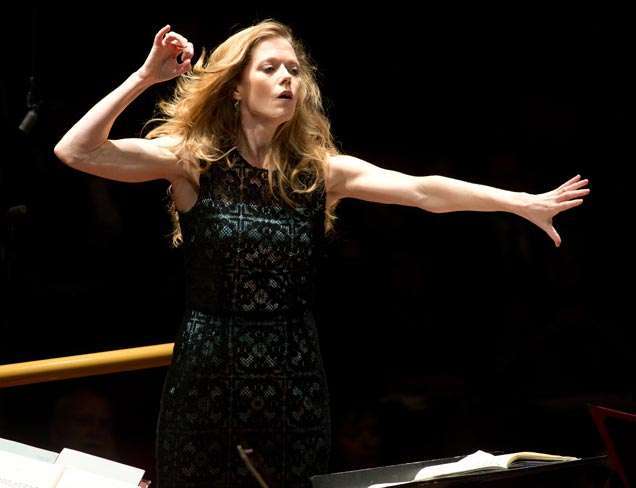 That Barbara Hannigan is one of the most charismatic and versatile (Handel to Boulez) singers around is not in doubt. She is also developing a conducting career. At the Barbican Hall, with the Britten Sinfonia, she arrived feminine in nature and dress, demure in one sense but exuding a steely confidence, which came to immediate fruition in the Overture to Idomeneo, dynamic and tension-filled, Hannigan’s hands sculpting the music and obtaining committed and personable playing. Then it was literally straight into Anne Trulove’s aria from The Rake’s Progress, the woodwinds’ expressive if astringent entrée making a direct contact with the Mozart. Hannigan’s vivid but not exaggerated projection of Auden & Kallman’s words (“No word from Tom…”) – that’s Tom Rakewell – was altogether special, and incisively accompanied (urged by the occasional gesture from the singer), Sarah Burnett’s bassoon a particular pleasure.

Haydn’s solemn and serious ‘La Passione’ Symphony found Hannigan giving a spacious outing for the opening Adagio, the music’s darkness well sustained if fluidly expressive and intrinsically progressing. The fast second and final movements – Haydn writing with energy and spirit if with no place for his customary wit, let alone jokes – found Hannigan and friends sustaining an emotional charge throughout, including during the quietest pianissimos, and not fearing the severity and shadows of the Minuet, the Trio, quickened-for, providing light relief in its dance – that was a wonderful moment. The use of a harpsichord was judicious, ensuring that its colour didn’t become commonplace. Hannigan was generous with repeats – observing most if not quite all – and that she used antiphonal violins (double basses behind the firsts) confirmed that conducting for her is a genuine and probing endeavour.

The concert’s second half followed a similar pattern, with another excellent account of a Mozart Overture, that to Tito being more than playing the notes and presented in ‘modern’ and dramatic terms, something carried into the concert-aria, lived through by Hannigan with operatic intensity (it took her several seconds to come out of it), once again sympathetically accompanied. To close the evening, the Suite from Stravinsky’s Pulcinella (further neoclassicism), once thought to be based exclusively on the music of Pergolesi but now revealed to include other composers of the Italian Baroque. The Britten Sinfonia was now at its largest for the evening – the thirty-three players that Stravinsky is specific about. The affection that Hannigan lavished on the score is entirely understandable, even though the occasional tempo was ‘under’, the opening ‘Sinfonia’ a little sluggish, for example (hairsbreadth stuff though), and if there was the sporadic solo blooper, but not from trumpet, trombone or double bass, present was an overriding zest that was infectious and a sensitivity that was touching. In this music Hannigan had an ideal feel for bluff humour and for elaborate lyricism, and also a keen ear for detail and accompanying figures. The Suite’s finale, cued by a notable crescendo, was suitably bright and rip-roaring. This line-up now travels to Saffron Walden (9th) and Brighton (12th). Well worth catching!