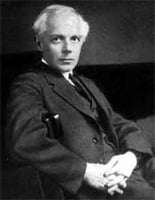 Pedagogy clearly exerts a strong pull for David Robertson. This evening of Béla Bartók and Vincent van Gogh (following one devoted to Debussy and Monet) was the brainchild of Robertson. Parallels between Bartók and van Gogh was the subject matter of Robertson’s illustrated lecture (illustrated in both senses – van Gogh’s images were projected onto a large screen and excerpts of Bartók’s were played by the orchestra). If nothing else, the presentation acted as a timely reminder that correlation between music and painting deserves more scrutiny and exploration than it has so far received. 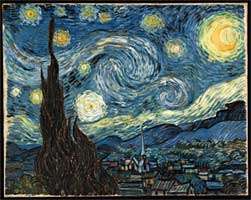 And so it was that the consideration of van Gogh’s “The Starry Night” drew parallels between the shapes of lines and those of melodic contours. The thick brushstrokes also provided fuel for comparison, as did the inspiration of Nature (just think of Bartók’s ‘night-music’ movements). Other van Gogh paintings were called in – “Barques sur la plage Saintes-Maries-de-la-Mer” was used for its use of line and linear contrast.

These two Bartók concertos were also played complete, beginning with the composer’s orchestral version of Sonata for Two Pianos and Percussion, intended as a vehicle for the composer and his wife to tour America (the premiere took place in London with Louis Kentner and Ilona Kabos as pianists and Mr and Mrs Bartók premiered the work in New York in 1943 with Fritz Reiner conducting). 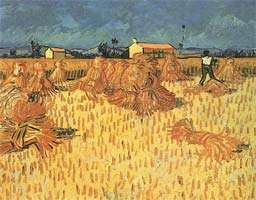 Any fears that orchestration could lead to softening the Sonata’s originality were dispelled here. Both pianists displayed vital rhythmic play and a big orchestral climax in the first movement added another dimension rather than merely inflating it. Similarly, the use of col legno strings in the ‘night-music’ slow movement was entirely apt. For the finale, “Harvest in Provence” was the chosen painting. The yellow-dominated fields did indeed seem to mirror the musical surface, but Bartók’s contrasts of light and dark are more extreme. Rolf Hind is well-known for his playing of contemporary music, while Paavali Jumppanen has recorded Pierre Boulez’s three piano sonatas for Deutsche Grammophon – as a partnership, Hind and Jumppanen worked extremely well together. 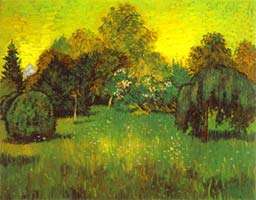 In Concerto for Orchestra, Robertson made the same parallel between van Gogh’s swirls and Bartók’s melodic shapes. The contrasts of and inter-relations between horizontal and vertical (as exemplified in van Gogh’s “Garden with Weeping Tree, Arles”) was explored, while on a purely musical level Robertson cited Bartók’s use of quotation (from “The Merry Widow” and Shostakovich’s ‘Leningrad’ Symphony).

On a performance level, Robertson set up a good sense of space for the opening movement and displayed a very natural way with increases in speed. Tempo juxtapositions were also well managed. The orchestra seemed to enjoy ‘Game of the Couples’ (set against a painting highlighting couples of girls). A shame there was some suspect wind tuning at the end.

Van Gogh’s “Self-Portrait” formed the backdrop for the pivot-functioning ‘Elegy’. The movement itself was given a reading of near-Mahlerian breadth and built to a climax of substantial grandeur (interestingly, there was an Elgarian nobility about parts of the ensuing ‘Intermezzo interotto’, while the Shostakovich theme brought with it intriguing Stravinskian connotations). Bright cypresses were on display for the finale, which, as a performance, began with plenty of energy but unfortunately lost its thread in the central portion; a shame for overall this was an impressive account of this well-loved masterpiece.