The Bavarian Radio Symphony Orchestra’s Chief Conductor, Mariss Jansons, has a history of medical problems, beginning with a near-fatal heart attack in 1996, suffered while conducting La bohème in Oslo, and most recently he had to cancel some engagements this summer and fall. Throughout this evening, the 76-year-old Jansons appeared quite frail, walking very slowly, and once or twice accepting a helping hand onto and off the podium, where his gestures were generally less than energetic. The next day’s announcement that Jansons had taken ill and would have to withdraw from that night’s concert – to be replaced by Vasily Petrenko – thus did not come as a complete surprise. 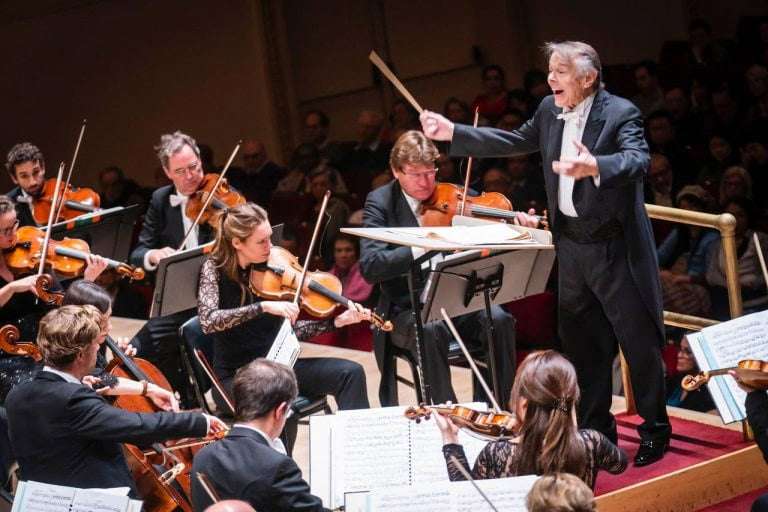 This program featured two German composers who persisted in their respective musical styles rather than conforming to newly emerging fashions. Brahms’s classicism, exemplified in his Fourth Symphony performed here, placed him in intense rivalry with Wagner and Bruckner, leading figures of the Romantic movement, and Richard Strauss, eschewing Serialsm and other early twentieth-century innovations, extended Romanticism into the middle of the new century, truly making him the last Romantic composer. There were two Strauss works on the program, including his final completed composition, Vier letzte Lieder (Four Last Songs).

The concert began in lighthearted fashion with the Four Symphonic Interludes from Strauss’s autobiographical opera, Intermezzo, strung together by the composer to form a sort of symphony (much as Benjamin Britten would later do with his Four Sea Interludes from Peter Grimes). These extended musical passages play a prominent role in the narrative of the opera, which is based on an episode in Strauss’s life in which a misdirected love-letter found its way into the hands of his wife, Pauline, nearly breaking up their marriage. The protagonists, maestro Storch and his wife Christine, are thinly disguised stand-ins for the Strausses. In the initial Interlude, a marital fight leads to Storch’s agitated departure for a series of concerts and Christine’s attendance at a tobogganing party and a ball featuring lush waltz tunes. The second Interlude reflects Christine’s solitary thoughts, a beautifully played horn solo suggesting her deep affection for her husband (much as that instrument represents Strauss’s alter ego Hero in Ein Heldenleben). The third depicts a card game at which the mistake upon which the plot is based is resolved, leading to a jubilant ‘Happy Ending’ finale. The relatively small ensemble (strings were 8-8-5-4-3) captured the Straussian idiom, particularly in waltzes in the same vein as those of Der Rosenkavalier.

Diana Damrau then gave a touching performance of the Four Last Songs despite suffering from a head cold. These songs, composed when Strauss knew he was near the end of his life, are set to three poems by Hermann Hesse and one by Joseph von Eichendorff. In ‘Frühling’ (Spring) Jansons and Damrau established a sensitive partnership, her vocal line blending with the orchestra’s lush sound without being overpowered. As the cycle of the year – and metaphorically of life – reaches ‘September’, the second Hesse poem, the words and music turn melancholy, with Damrau’s tender rendering of the final lines, “Langsam tut er die Müdgewordnen Augen zu” (Slowly, his eyes, weary with sleep, will close), followed by a lovely horn solo. Damrau’s singing was still more beautiful in ‘Beim Schlafengehen’ (Going to Sleep), with the celesta suggesting the twinkling of stars in the night sky, and she sang with fitting softness in the concluding ‘Im Abendrot’ (At Sunset), in which Eichendorff’s poem expressly connects sleep with death, as flutes emulated a pair of larks and a fine violin solo enhanced the vocal line.

After an unusually lengthy intermission, perhaps owing to the maestro’s indisposition, Jansons led a performance of Brahms’s final symphony that evoked melodic beauty while paying due heed to details of its carefully crafted structure. The opening Allegro non troppo featured incisive winds, impressive string pizzicatos, fanfares on horns and trumpets, and excellence on timpani. Brahms’s clever twists include the abandonment after a few measures of what seems at first to be the start of an exposition repeat . The Andante moderato featured a gorgeous cello melody, with horn, flute, clarinet and bassoon also making excellent contributions before gentle strings brought the movement to a quiet close. The scherzo was appropriately rhythmic and boisterous, with piccolo and triangle adding high-pitched accents.

Jansons was at his best in the finale, inspired by a theme from a Bach cantata and structured like a baroque chaconne or passacaglia. Its 32 variations on a recurring theme (plus a coda) provide opportunities for various instrumentalists to show off their virtuosity, and the entire orchestra rose to the occasion, highlighted near the midpoint of the movement by a series of slow variations: first for solo flute; next oboe and clarinet; and then horns and trombones, the latter added for this movement only. The pace was restrained but propulsive in its drive to the finish. Jansons seemed to gain energy in a lively encore – Brahms’s Fifth Hungarian Dance, performed with exaggerated rubato.