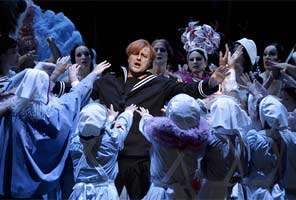 This was the second performance of the new Bayreuth production of “Parsifal” by the Norwegian director Stefan Herheim. There were a few sporadic boos at the end of the second act and at the end of the performance but these were isolated. There was a buzz in the house and much debate to be heard in the intervals and in restaurants later in the evening. Of course the piece was written for the famous acoustic of Wagner’s own Festspielhaus and it remains one of the places to hear the score – there will always be something magical about hearing the quiet Prelude emerge from the darkness of the covered pit.

The Bayreuth Festspielorchester was in fabulous form under Daniele Gatti whose measured tempos, amongst the slowest yet in this theatre apparently, never felt contrived. The strings had all the necessary shimmer and sweetness, and the upper woodwind instruments sang elegantly. The louder dramatic moments had both power and sweep, and the bells of the transformation scenes – so often obviously electronic, tinkly or misjudged in other theatres – here sounded as resonant, imposing and temple-like as one could dream for.

The forgiving acoustic also provides for clear projection of voices and, for the most part, Bayreuth had managed to assemble a cast that was more than equal to the demands of the composer. Christopher Ventris was making his Bayreuth debut in the title role, for which his slightly baritonal tenor is perfect. With all his long experience in the part, he acquitted himself superbly. His final ‘Nur eine Waffe taugt…’ had a glorious ring to it.

Also impressive was the youngish bass Kwangchul Youn as Gurnemanz. He has a lovely soft-grained voice, not overly powerful. This he uses with great care for words whilst always maintaining beauty of tone. This marked a pleasant change from the interpretations of more ‘senior’ basses who do not always sing the role as persuasively, even if they perhaps provide greater interpretive insight. 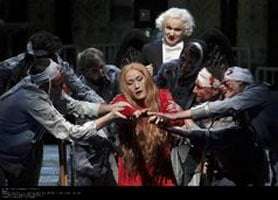 The same might be said of Mihoko Fujimura’s Kundry. She is a lighter-voiced interpreter than we have come to expect in recent times, but she has a lovely, rich and frequently velvety middle register that means the more lyrical moments of the role emerge as passages of great beauty. Her top is not always absolutely secure and some of the highest notes were somewhat snatched, robbing some of the character’s more dramatic outbursts of their ideal intensity. Detlef Roth was a fine and intense Amfortas, one who managed to sing softly and keep you hanging on every word. This was particularly true in the quiet sorrowful ‘Mein Vater! Hochgesesgneter der Helden’ passage sung over the coffin of Titurel in the last act.

The young-sounding Klingsor was Thomas Jesatko who managed to be both virile (despite his self-emasculation) and slightly sinister despite some curiously camp costuming. The unseen Titurel of Diógenes Randes made an impact too. The smaller roles were less spectacularly cast than they have been in Bayreuth previously. By contrast the chorus was as good as ever it was, and the singing at the end of Act Three, particularly by the men, was spectacular in its power and quality. 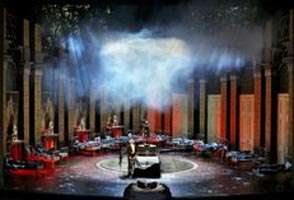 But what of the production? Firstly, the extremely complex set designs by Heike Scheele looked stunning and, for the most part, the scenic transitions work well. Particularly impressive were the moments when rooms suddenly seemed to expand or contract before your very eyes by subtle changes of perspectives. At other times the theatre itself seemed suddenly to reach through into the stage area, and the recreations of some of the historical scenery of past “Parsifal” productions were exquisite and romantically atmospheric.

Herheim’s production seems to be tackling many different themes concurrently. There is a theatrical and truthful re-telling of the Parsifal story commencing with the apparent death of Herzeleide (Parsifal’s mother) in front of the child during the Prelude. This is mirrored in what seems to be an account of the history of the Wagner family at Bayreuth running from its origins in the 1870s right through to the present day, being charted in tandem with a visually imaginative video and stage reconstruction of Germany’s history over the same period. 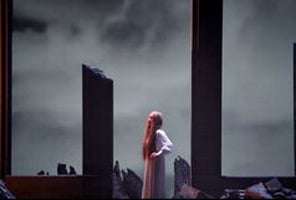 Much of the action takes place in and around Villa Wahnfried – we often see a recreation of the view from Richard and Cosima Wagner’s grave, across their garden to the doors of the house that led to his main reception room. So, shortly after the death of Herzeleide, we see the birth of a child within Wahnfried – perhaps intended to be Siegfried Wagner? The costuming of the early scenes leads one gradually to the outset of the First World War and beyond, although, as if in a dream sequence, the characters initially – apart from child and mother – all have huge wings.

Nothing is shirked in the re-telling of German history and there is much effective use of film footage projections. Act two brings us bang into the Festival’s unfortunate links with the Third Reich, Klingsor’s attempts to halt Parsifal at the end of the act involving what has been a military hospital during the war suddenly filling with red banners/barriers walls coated with swastikas – a tense moment in this theatre. In the final act we are post-war, Gurnemanz being found in the bombed ruins of Wahnfried. The final setting is in some sort of political or parliament hall where the future of the Knights of the Grail/the Wagner family/the Bayreuth Festival itself seems to be the subject of the political debate. A giant mirror gradually reflects the watching audience back to itself – inviting the conclusion that the Festival’s audience itself must become involved with its re-incarnation in the modern world.

There is other startling visual imagery. Amfortas appears as a fallen-Christ like figure with thorns embedded in his red hair and with the spear wound very much as it appears in representations of Christ on the cross. Kundry’s multiple guises as part of the mysterious woman reincarnated throughout history with her multiple allegiances are defined by some complex costume and wig changes, and Parsifal’s transformation from innocent boy wearing a child’s sailor suit to the aware knight of the final scene is also defined both through costume and wig changes.

So, as one can tell, there is much to keep the intellectual senses alert. This is no static production, as one often encounters. It probably needs several viewings to really get to terms with it, and I suspect it will become a Bayreuth classic over future seasons – goodness knows this festival needs some such productions. After a few years in the doldrums is Bayreuth about to re-invent itself, again in tandem with a regime change as Wolfgang Wagner retires? This production promises much.