This concert by the BBC National Orchestra of Wales found the ensemble in its recording and rehearsal venue of Hoddinott Hall – part of the Wales Millennium Centre that is located at Cardiff Bay, and which combines unsparing immediacy with a depth of perspective lacking in many comparable acoustics. It was certainly heard to impressive effect in the present programme, with Martyn Brabbins directing a typically enterprising sequence that comprised British music from the early- and mid-twentieth century alongside a major recent orchestral work by one of the leading composers from the middle generation – John Pickard being on hand to introduce his piece in an informal and wryly entertaining manner.

Tenebrae (2008) was inspired by Carlo Gesualdo, the Italian prince and composer who murdered his wife and her lover – thereafter to create music of increasing chromatic intensity as typified by his Tenebrae Responsories. Of these, ‘Tristis et anima mea’ permeates the thematic substance of the present piece which, lasting for almost 27 minutes, is nominally in the lineage of Pickard’s earlier orchestral works (not least The Flight of Icarus). What marks out Tenebrae is its recourse to the lower compass of the orchestra – with contrabass clarinet and bassoons as well as bass oboe clearly audible – and a formal ground-plan that feels less outwardly systematic than hitherto, though without sacrificing the organic evolution and cumulative momentum which have long been synonymous with this composer. Emerging from vaporous washes of sound, the music builds in motivic detail and textural intricacy toward a visceral climax; duly subsiding to make way for a stealthy passacaglia whose remorseless expansion brings a seismic apotheosis before an inevitable return to the depths.

Directed with undemonstrative mastery by Brabbins (who gave the world premiere in Norrköping almost three years ago and recorded it with that orchestra for imminent release on BIS), with the BBCNOW evidently unfazed by its technical demands and sustained emotional impact, Tenebrae is less a new departure than an opening-out (even freeing-up) of the long-range tonal thinking central to Pickard’s music from the outset – though now with a freedom of imagination borne of a certainty of intent. Hopefully conductor and orchestra will have the chance to present Tenebrae again (it would certainly leave an impression at the BBC Proms), so reinforcing the interpretive basis this music manifestly warrants. 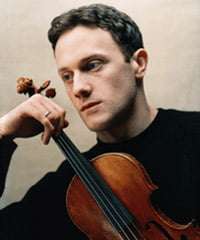 After the interval, Matthew Trusler (standing in for an indisposed Vilde Frang) gave a fine account of Britten’s Violin Concerto (1939, later revised) – a work which, though never neglected as such, has certainly moved towards the centre of the repertoire in recent years. While a recourse to earlier models (Prokofiev in particular) is not hard to detect, the expressive immediacy and lack of emotional inhibition are qualities not always to be taken for granted in a mature output which is regrettably short of major orchestral undertakings in any case. Trusler had the measure of the first movement’s wistful eloquence, even if the incisive central episode was a little rhythmically inflexible, then the scherzo had the right interplay of truculence and rumination – building to a powerful climax and leading, via a scintillatingly realised cadenza, to the finale which announces the passacaglia as a favoured formal means for this composer. While the follow-through of its variations was a little unfocussed, the stark initial paragraph and imploring coda set the seal on a notable performance.

The concert ended with Frank Bridge’s The Sea (1911) – if not necessarily the finest of his earlier works then surely the most directly appealing. Along with the composer’s already enviable mastery of the orchestra goes a formal integration which is symphonic in conviction if not designation. Brabbins brought out the evocative warmth of the opening ‘Seascape’, and was no less insightful in the darting motion of ‘Sea-foam’ or the emotional ardour of ‘Moonlight’, before the rhetoric of the closing ‘Storm’ was rightly held in check so as not to pre-empt the reflective poise of the cor anglais-led episode that leads to the final peroration: a ‘‘sea-lover’s dedication to the sea’’ whose surging affirmation was never to be recaptured.