Reviewed from live BBC Radio 3 broadcast… A concert notable for avoiding ‘usual suspect’ pieces had me tuning in for three masterpieces that don’t come up too often, let alone together, each tricky to bring off and needing careful preparation. The BBC Philharmonic and Andrew Davis had obviously worked hard on these demanding scores and the results were impressive across the board.

Sibelius 6 (1923), his “cold water” Symphony, is pure music about itself, yet also transporting to a time and (perhaps mystical) place. Sir Andrew opened the work with blissful expression, moulded to a nicety and ideally transitioned into the faster music, pointed and detailed, dancing lightly, organically developed, and with subtle changes of dynamics. Sibelius 6 may be considered enigmatic, it is certainly economic (when each movement is done, the music stops), yet has generous allure, and Davis found an astute balance between his specific concern for the music and perceptive regard for Sibelius’s pristine organisation, whether the rhythmic grace and flickers of the second movement, the staccato bustle of the third, or the direction of the active Finale (for which Davis reserved his quickest speed), framed respectively by an affecting chorale and, ultimately, with a sense of peace achieved; of course, Sibelius doesn’t wallow in such an arrival. 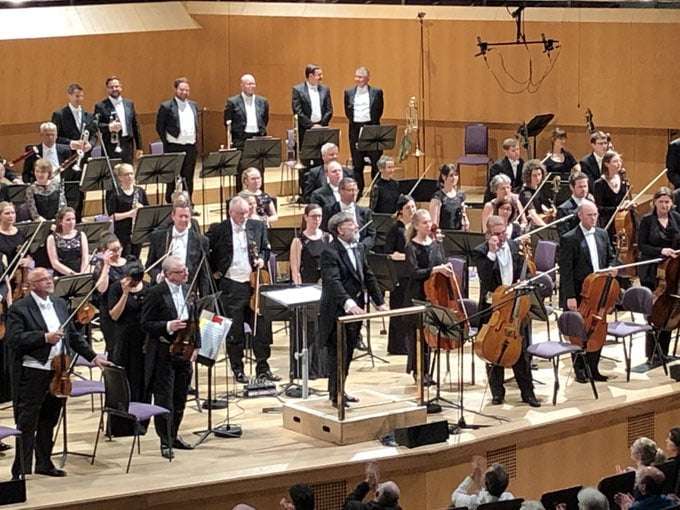 Steven Osborne is a Tippett man through and through (so too Andrew Davis): he has recorded all of the composer’s piano music for Hyperion. Tippett’s Piano Concerto (1955), written for Noel Mewton-Wood (although Louis Kentner gave the premiere, Mewton-Wood having committed suicide), grows out of Tippett hearing Walter Gieseking play Beethoven’s G-major Concerto. In homage to that masterwork, and in the wake of his own opera The Midsummer Marriage, Tippett’s Piano Concerto is lyrical and poetic, music that glows with woodwinds (a pastoral flute solo to open), solo strings and celesta, and also communicates vividly. Osborne’s technical acumen (the piano-writing was thought unplayable by Julius Katchen, he had been approached to do the first performance) and attention to expressive detail, matched collegiately by conductor and orchestra – and this harmonious music demands such a partnership – ensured an in-agreement approach to Tippett’s inimitable idiom and design, phrase and route as-one in the first movement’s ripples and rapture, to which the cadenza (with chiming celesta) was made innate. For all that the second movement is marked Molto lento e tranquillo it is quite restless and incident-packed if yielding to a magical refrain for piano and trademark ecstatic string-writing … and whatever dark disturbances might lurk therein they are disbanded by the eager springing strides of the Finale, strings dancing, and with jazzy writing for the soloist, relished by Osborne, and a cue for the sidekick celesta to return before a resolute conclusion. Appropriately Osborne added a Beethoven Bagatelle as an encore, the Third of the Opus 126 set essayed with much tenderness.

Date-wise, Stravinsky’s Symphony in C comes between the Sibelius and the Tippett; finished in 1940 this was a bad time for the composer, dominated by his own illnesses and familial deaths. Nevertheless, this abstract neoclassical work generally belies such tragedy, musical creativity as an escape, perhaps. Technically Symphony in C is full of pitfalls (I recall a half-baked London concert performance that just about hung together), but no such problem here. With a secure BBCP response Sir Andrew found energy and unforced terpsichorean point in the first movement, manifested by buoyancy and clarity, lyricism too. I don’t think I have previously registered just how poignant the slow movement can be; indeed the performance as a whole was something of a revelation in making significant the many cadenced addresses, communicative ripostes – a host of characterisations in fact – and the contrapuntal scoring. I wondered too (also for the first time) if the ultimate coda consciously echoes Symphonies of Wind Instruments, composed by Stravinsky in 1920 as a memorial to Debussy. A stellar concert then – from Manchester to my radio.