Prokofiev’s great Sixth Symphony dates from just after the finish of World War Two. It’s what might be termed a ‘thawing’ work, one still trapped in the jaws of conflict yet, in the finale, finding optimism, even playfulness. It is though first and foremost a symphony, its sting-in-the-tail conclusion signalled in the curt opening. Strangely, for a conductor so concerned with form and structure, the first movement here sagged rather sectionally under Jiří Bělohlávek, the slower music lacking sentiment, the conflagration of the development falling-short in ultimate sear. Nor was the playing at times quite as assured as it might have been, ensemble, solos and rubato lacking that last degree of finesse and agreement. The central Largo, a snake-pit of a movement, and inhabiting similar tensions to the first one, became more and more absorbing, a cry of pain contrasting with gentler asides and mechanistic patterns, the latter arriving integrated to the whole (even if Prokofiev might have intended greater disruption).

Bělohlávek chose too-fast a tempo for the finale, the cleanest articulation compromised; the music’s (apparent) light-heartedness sacrificed to accuracy, and whenever timpani and piano have a unison contribution the former was the dominant partner. However positive this music seems, the coda, as descibed by David Gutman – “Everything ‘resolves’ on a grimace, a triad of E flat major, that can sound as un-triumphant as any major triad has ever sounded if the conductor chooses to interpret it that way.” – was here neither a victorious swagger nor the knife being turned further in an existing wound. Perhaps that summed up an account that had been rather impartial – for this is music requiring a bloodied hand and a wary eye to things not being what they seem.

Stravinsky’s new-age (1938) Brandenburg Concerto opened the concert (broadcast live on BBC Radio 3), a little neo-Baroque something written in Switzerland to Mrs Robert Woods Bliss’s commission for a premiere at her and ambassador-husband’s home named Dumbarton Oaks, in Washington, DC. The without-baton Bělohlávek joined the 15-strong BBCSO group on the shop-floor for a spruce performance, the first movement spiky and spicy, incidents fitting like like clockwork with beauty of expression found in the final bars. The dance of the central Allegretto was well caught and the finale enjoyed togetherness, resilience and a real sense of homecoming. 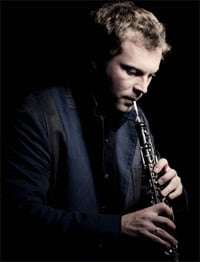 Stravinsky excludes the oboe from his scoring of ten strings, three woodwinds and two horns, so the new Oboe Concerto from Frenchman Marc-André Dalbavie (born 1961) was well-placed. This very attractive work was suggested as lasting twenty minutes yet took thirteen. (Did the co-commissioners pay for the longer length and now are seeking a refund?) Irrespective of this, Dalbavie’s Oboe Concerto is very attractive, although its occasional use of multiphonics for the soloist seems a bit of a stain on the divertissement character of the work of a whole, the nimble, even skittish solo part brilliantly taken by Alexei Ogrintchouk, a fabulous player, Dalbavie’s use of full orchestra reminding of Dutilleux in its soundworld and iridescence. This first performance, the composer present, seemed exceptional.