London audiences have been fortunate in the last eighteen months or so to have heard some notable accounts of Tchaikovsky’s ‘Pathétique’ Symphony, kick-started by the Chicago Symphony Orchestra and Riccardo Muti on 5 October 2007 and followed by memorable performances conducted by Charles Mackerras (Philharmonia Orchestra) and Antonio Pappano (LSO). Jiří Bělohlávek and the BBC Symphony Orchestra were similarly inspired, here presenting a cohesive and very moving realisation that compelled from first note to last.

Anyone looking for neurosis and volatility presented in sock-it-to-em terms – a suicide-note masquerading as a symphony – may have been disappointed; what Bělohlávek conjured (and he does seem to be creating magic down at Maida Vale in his scrupulous preparations) was a remarkably coherent work, everything belonging and related, an unbreakable chain with no weak links, the composer’s emotions all the more thrilling and poignant for not being exaggerated.

Balance was well-nigh-perfect, the Barbican Hall without the blighting ‘enhancement’ (real or imagined) that seems to have been present during some previous BBC Symphony Orchestra concerts in this Hall (or I was in the perfect seat on this occasion). In such a neutral ambience, balances were unfailingly well-judged, Bělohlávek keeping the well brass reined-in, seeking details often glossed over (such as the clarity of quiet timpani underneath the clarinet solo, beautifully played by Richard Hosford, that emerges just before the coda of the first movement).

Right from the off, with a flowing and impressionable bassoon solo from Graham Sheen, this performance seemed stamped ‘something special’; so it proved as Bělohlávek unfolded the first movement ‘in one breath’, alive to the incident of each episode while disproving the sectional nature of the whole yet sustaining soul and tempest. With a ‘Waltz’ light on its feet, a ‘March’ that was given a little more time (than the norm) to express itself, and a final Adagio lamentoso that emerged as a single line with an organic rise and fall, this was a performance that moved and illuminated.

One might have liked less of the cymbals and bass drum in the ‘March’, more of the gong in the finale, and certainly antiphonal violins (a standard arrangement in Tchaikovsky’s day and one that Bělohlávek has been surprisingly fickle over), and equally-certainly done without the vacuous applause that greeted the ‘March’ (the previous three performances mentioned had escaped such intrusion – the silly buggers that clapped not considering that Bělohlávek might have wished to go straight into the finale, which can create a wonderfully dramatic opposition of moods, and which Muti and Pappano were allowed to achieve).

Nevertheless, this was a deeply compelling and powerfully memorable performance. 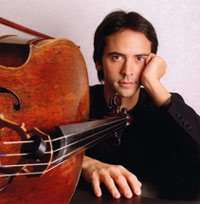 In the concert’s first half Jean-Guihen Queyras gave a light and relaxed account of the Haydn in which dynamic and tonal contrasts kept the ear active. If the soloist’s cadenza for the first movement was rather lengthy – and the pairs of horns and oboes were too homogenised with the strings in what was a spry accompaniment – this immensely civilised performance, with the occasional touch of caprice from Queyras, was agreeably affectionate in appreciating Haydn’s tireless genius.

Opening the evening was a very secure first performance of Brian Elias’s Doubles. Elias (born 1948) has done well with BBC commissions over the years and has repaid such faith with music lucid, highly crafted and brimful of narrative potential. A previous BBC commission, The House that Jack Built, cries out for a recording and, now, so too does Doubles. Maybe NMC (which already has an Elias release in its catalogue) or Chandos could do the honours, which need be no more than issuing the tapes of the respective first performances.

Lasting 28 minutes, Doubles is a major addition to the orchestral literature, and most importantly in terms of musical substance. Doubles is scored for a standard large orchestra, including piccolos and alto flute, E flat and bass clarinets, six horns, four trumpets, two harps and a well-filled percussion section including Japanese temple bells and Thai gongs. From the explosive beginning one is dragged into a continually eventful work in which one values the composer’s microscopic attention to detail, his establishing of recognisable motifs and his ‘running with them’ to such absorbing effect.

In six played-continuously sections (but one is more aware of an unfolding entity), the second three are ‘doubles’ of the first three, which is not to suggest a varied recapitulation; rather this is music that has a symphonic sweep with elements of being a ‘concerto for orchestra’ and for vividly suggesting a programme (one for the listener’s imagination).

Whether in parading events at a terrific lick and with reserves of energy or entering a magical, secluded world (where we are suspended at the close), Elias’s score is recognisably British, with some Americana studded in, but avoiding any tag of being ‘transatlantic’ for Elias is fiercely independent in his invention without being forbidding (in outline I was reminded of American composer Peter Mennin’s Symphony No.7, which is in variation form). Doubles is music to hear again and further explore.