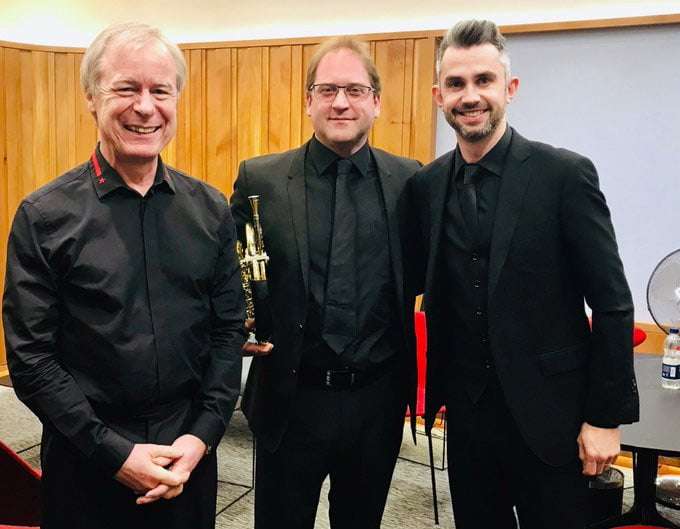 Oddly, given the programme and a former principal guest conductor, this BBCSO concert was a stalls-only event.

It opened with Raymond Yiu’s The London Citizen Exceedingly Injured, a compressed concerto for orchestra in all but name, which the BBCSO premiered in 2013. Yiu channels the tortured life of the eighteenth-century biblical scholar Alexander Cruden and aspects of George Orwell’s dystopian novel Nineteen-Eighty-Four into an impression of London – the premiere was given alongside Elgar’s Cockaigne Overture and Haydn’s ‘London’ Symphony (No.104) – quoting the Elgar and the nursery rhyme ‘Oranges and Lemons’ with deft sleight-of-hand, very much in keeping with Yiu’s impressive breadth of inspiration, a powerful imagination and a phenomenal ear. Sudden eruptions of swooning melody are set against music that fills the shadowy gaps, and I got the strong impression of music in a state of spontaneous generation and evaporation, just like a city. Yiu circles tantalisingly around his themes, suggesting the ghosts and memories that temper a city’s brash, all-consuming progress, with a memento-mori-like flugelhorn sign-off acting as a sober reality check. David Robertson has form in gauging how to make this degree of detail count, and the BBCSO delivered it in great style.

Robertson relaxed a bit into a spacious, glossy account of the Serenade for Tenor, Horn and Strings, Britten’s not-so-little Night Music, with Martin Owen in superb, almost too effortless command of the harmonics in the ‘Prologue’ and ‘Epilogue’, the latter vanishing into distant silence. By the time we got to Keats’s ‘To Sleep’, the strings had recast dark matter as sound, realising Britten’s evocations of atmosphere, ecstasy and anxiety with unnerving accuracy. Anthony Gregory, who over the past few years has taken on a number of Britten and Baroque-opera roles, was cultivated, expressive and word-friendly, but the size of his voice was worrying. While he was impressive in, say, the difficult melismas of ‘Queen and huntress’, too often he slid beneath the strings’ volume, and his level of engagement with the orchestra stayed much on the same level. It will be interesting to hear the Radio 3 recording.

In the first movement of Shostakovich’s First Symphony, Robertson was sparing in visceral bite – despite Aaron Akugbo’s marvellous, scene-setting trumpet solo – preferring weight to layers of ironic angularity, but he got into his stride with a spiky Scherzo, given even-sharper teeth by Elizabeth Burley’s piano. And you could hear how all the influences – jazz, Tchaikovsky, significant nods to Mahler, profound bows to Wagner – jostle for attention without compromising its own voice. Robertson judged the opening of the Finale perfectly, so that you were suddenly overwhelmed by the stature of the teenager composer. Excellent solos only heightened the impact of this amazing work.