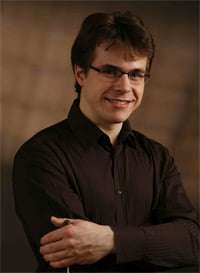 With only composers from repressive 20th-century regimes on the bill, there was a slight foreboding that this concert would be a grim affair. But intelligent programming and superb performances ensured a compelling, life-affirming evening.

Svatopluk Havelka’s 1974 “symphonic fantasia” in homage to the 15th-century Dutch painter Hieronymous Bosch received a belated UK premiere under the assured baton of Czech conductor Jakub Hrůša. A protégé of the BBC Symphony’s Chief Conductor Jiří Bělohlávek, Hrůša took the angular, virtuosic writing of his countryman in his stride. Gritty woodwind (tempered by a prominent role for soft-edged celesta), whooping horns, and quirky percussive effects evoked the bizarre and often disturbing images of Bosch’s works. In many ways a concerto for orchestra, the piece was relished by the BBC players.

Similar commitment, excellence and joyous showmanship were brought to Hindemith’s ebullient Symphonic Metamorphosis on Themes by Carl Maria von Weber of 1943. Hrůša deftly caught the underlying humour of the work, making the most of its big gestures while maintaining a crucial lightness of touch. The trombone-led riff of the ‘Turandot Scherzo’ had an infectious, jazzy spring in its step, and the ‘Andantino’ was wonderfully fragrant and exotic. The final ‘March’, which captures an unsettling sense of (Nazi) menace countered with triumphant heroic optimism, was exhilarating: fulsome sweeping strings, merrily chattering winds, gloriously bold brass and Hrůša’s theatrical direction made for a rousing conclusion.

A near-exact contemporary of Hindemith, Carl Orff remained in Germany during the 1940s (while Hindemith fled). It was the success of “Carmina Burana” (premiered in 1937) which sealed Orff’s fate: the work’s earthy celebration of life appealed to Joseph Goebbels as propagating Nazi-claimed values of “the indestructible ways of the common people”.

In fact, the work (setting notoriously bawdy texts by 13th-century monks) almost certainly carried no hidden political meanings, and its jubilant revelry in life’s simple sorrows and joys (especially the pleasures of the flesh) can be whole-heartedly enjoyed today in the spirit in which they were intended – especially in such a radiant performance as this. Right from the opening ‘O Fortuna’, which thrilled as though never heard before (a remarkable feat for such an over-played piece), skin-tight orchestral ensemble and buckets of dramatic flare sent collective spines tingling.

The BBC Symphony Chorus sang with terrific gusto and sensitivity underpinned by impeccable diction and tuning. Such was the superb unanimity of the hundred-plus choir that at times it sounded like one voice. The male voices’ feverish drinking song was a highlight of the evening.

Each of the impressive soloists shone, too. Taking the lion’s share, William Dazeley gave spirited accounts of the demanding baritone numbers, and John Graham-Hall’s impersonation of a spit-roasting swan was delectable; but golden-toned Sally Matthews stole the show with her sumptuous final submission to fleshly delights. The irony of the obviously-pregnant Matthews radiantly singing of her “simplicity” and “virginity” was entirely in keeping with the spirit of the work! A memorable evening.