Arranging an orchestral suite from any opera is a risky business; gone, obviously, are the sets and costumes, let alone the singers and the acting. If the music is strong enough – and Janáček’s is, of course – then at least a flavour, maybe a couple of courses, of the drama will survive, in this case focussed on the tragic life of the driven-to-suicide Katya. Whether Jaroslav Smolka should have attempted a Stokowski-like synthesis of “Katya Kabanova” (completed in 1921) rather than designing a five-movement (25-minute) suite (2007) from it is a moot point, for there was here a relaxing of tension across the divides, something that the music Janáček himself conceived can rarely be accused of suffering; even so, the gamut of emotions and descriptions this music possesses did come across in this dedicated first performance, be it misty threat, intense characterisation, expressive asides or ecstatic emotive vistas. Whatever (short-lived) consolation there is still comes with an edge, and contrasts of lyricism and (folk-related) rhythms soon engulf in a self-destructive pact, elemental fury leading to a timpani-dominated denouement. (Hearing this music, albeit in telescoped and decontextualised form, was a useful curtain-raiser for English National Opera’s forthcoming David Alden-directed production of “Katya Kabanova”, which opens on 15 March, link below.) 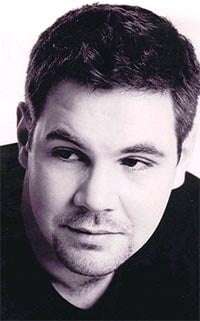 For his Violin Concerto (1937/1945), Erich Wolfgang Korngold plundered several of his Hollywood film-scores for a three-movement piece of delicious ideas, a vibrant and suggestive work, gloriously tuneful and colourfully orchestrated. Initially Andrew Haveron (co-leader of the BBC Symphony Orchestra) and Jiří Bělohlávek seemed to have agreed on a plain-speaking account, for there was a lack of skittishness and tenderness if a not-unwelcome structured rather than rambling approach (and the music itself is skilfully concentrated). Yet, bit-by-bit, the performance blossomed to something exceptional. Haveron is a superb violinist, attractively unvarnished in tone but with vivid communication, and in music that can suffer a heart-on-sleeve approach, the central slow movement was correspondingly heart-breaking in its relative simplicity, coming from within rather than given a calculated makeover. Similarly the finale was played straight but with puckish enjoyment – its rambunctious qualities undimmed – leading to a happy-ever-after and resplendent (credit-rolling) conclusion.

With this concert Jiří Bělohlávek and the BBC Symphony Orchestra reached the halfway point in this season’s survey of Bohuslav Martinů’s six symphonies, with numbers 3, 5 & 6 still to come. (If Martinů remains a composer on the periphery of full appreciation, a website for him is linked-to below.)

Martinů’s Symphony No.4 has been described, appositely, as “surely the most sheerly lovable of all his works.” It was first performed in the year of its completion (1945) by the Philadelphia Orchestra and Eugene Ormandy and first recorded three years later by the Czech Philharmonic and Rafael Kubelík. Jiří Bělohlávek is a dedicated champion of Martinů’s music and has the Fourth Symphony as a part of his being (for this performance he had no need of a score, not even as an aide memoire) and has recorded the Fourth Symphony three times (first for Pamton, then for Chandos, and most recently for Supraphon, the latter two versions with the Czech Philharmonic, not that this would have been gleaned from the programme-book’s “Further Listening and Reading” section, which could only muster Neeme Järvi’s decent-enough Bamberg recording as a recommendation).

Written at a time of personal contentment for the composer, and with an Allied Victory close in World War II, Martinů 4 could be described as a generally joyful work, one that sings and dances and does so through characteristic mosaic-like orchestration, with vital and ingenious rhythms and an expressive ambience akin to a flower opening out in full glory, but with no diminution of Martinů’s personal cri de couer that runs through his music and, here, especially, uncoils itself at a couple of points in the finale. In the Fourth, composed in the United States, one can also breathe the clean air of the Appalachias (in the pastoral-haven trio of the second-movement scherzo) and contrast that with the haunted and desolate expression of the slow movement, which also suggests Martinů probably knew and admired Sibelius’s Tapiola. (Post the Kubelík recording, did Martinů revise the writing for the piano at this movement’s mid-point, for performances can disagree for several bars as to what this instrument plays or doesn’t play?)

If, on this occasion, the symphony’s ultimate coda, an exhilarating unleashing of optimism, was not as ‘swing band’ as it can be or as multi-dimensional as Martinů’s layers of counterpoint demand (it’s always a delight to unravel those!) – the trumpets losing out here – the latter is due more to the Barbican Hall’s acoustic, which lacks ‘depth of field’ (and was also the cause of some over-brightness at other times, something the conductor could have toned down). Nevertheless, it was a treat to hear this music live – which makes an immediate positive impression on first-time listeners and continues to fascinate those with a longer acquaintance of it, especially in this fastidiously prepared performance led by someone who truly believes in the music’s greatness.