Haydn
Symphony No.101 in D (Clock)
Hummel
Piano Concerto in A minor, Op.85
Ravel
L’Heure espagnole – Comédie Musicale in one act to a libretto by Franc-Nohain after his play of the same name [concert staging; sung in French with English surtitles] 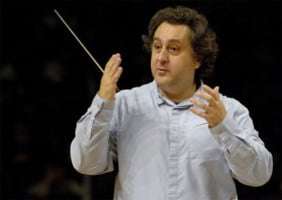 This was my first experience of the Catalan conductor Josep Pons. He’s guest-conducted with the BBC Symphony Orchestra before (and does again in this season on December 7), but his career is firmly centred in Spain, where he has just started as music director at the Liceu in Barcelona.

Josep Pons made a very strong impression in this clock-themed BBCSO programme. Some may have raised an eyebrow at the lithe-but-solid opulence he encouraged in the Haydn, but you could set against that a clarity and depth of sound that really made you listen. Late Haydn in particular responds well to modern, high-definition treatment, and Pons kept the first movement’s parade of explosive energy and surprise surging forward. The music’s argument never faltered, and the BBC musicians delivered the sort of mercurial response orchestras achieve either from a conductor of long standing or one they really like working with. The tick-tock accompaniment in the Andante worked its deceptively carefree charm, with a wonderfully po-faced bassoon accompaniment. Pons ensured that the corrective dialogue on the Minuet’s Trio made its point, and the finale showed of the BBCSO’s nimble form to its considerable advantage.

It’s hard to believe that Stephen Hough’s ground-breaking Chandos recording of Hummel’s piano concertos is now 25 years old – for many listeners, I suspect, the concertos became a sort of missing link between Mozart and Chopin, expressing a blend of strong conservatism and rampant virtuosity that bypassed early German romanticism in favour of an overwhelmingly florid style. Hough was just amazing, presiding over the torrents of notes and teeming decoration with a devastatingly attractive and patrician delight. Just the reams of rapid thirds bubbling away with a ‘watch-this’ insouciance or the gasp-inducing closing pages of the finale gave you an idea of how hard this music is to deliver – It has to sound like a display but any show of effort would be definitely ‘uncool’. Most of the ceaseless decoration is purely self-serving, but Hough let us hear how it is given substance by the concerto format, and Pons was with him all the way, reminding us en passant that Hummel was (unlike Chopin) an imaginative orchestrator. Pons cleared a path for a winning integrity between soloist and orchestra – rather more so, in fact, that you get from the recording – but it didn’t deflect attention away from Hough’s tireless, lightly-worn brilliance in the most thrilling concerto-playing I’ve heard in a long while.

Back to clock-watching in Ravel’s precision-engineered short opera L’Heure espagnole, about the wife, bored with her clockmaker husband, who eventually strikes lucky in her quest for extra-marital activity. One thing became abundantly clear, again courtesy of Pons. When the work is staged, it’s all too easy to become caught up in the intricacies of farce – with lovers hiding inside clocks, clocks being hoisted upstairs to la señora’s bedroom and down again by a strapping young muleteer – for the music to retreat a bit. If anything, in this semi-staged concert performance – with the singers, their music-stands and two Big Ben grandfather clocks ranged in front of the orchestra, and with images of clocks projected round the hall – Ravel’s sumptuous score was very much first among equals. And what a score it is, its multi-layered, fastidious detail jumping to attention, the liberated instrumental-playing saturated in imaginative characterisation.

Some of the singers seemed more attached to their scores than others, but that didn’t distract too much from the nitty-gritty of clock-moving, seduction and hiding. Ruxandra Donose was both an earful and an eyeful as Concepción, her voluptuous voice enhancing the real comedy of her getting increasingly flustered and frustrated. Her growing awareness of muleteer potential was nicely drawn, and its happy (for her) resolution, you felt, nothing less than she deserved. Her situation was neatly set up by the brilliantly fussy Torquemada (the much-cuckolded husband) sung and acted with disarming directness by Jean-Paul Fouchécourt. Julien Behr’s sweet tenor hit all the right notes for the lover Gonzalve’s passion-killing poetic effusions (so cunningly parodied by Ravel), and music-stand wrestling notwithstanding, Behr managed to be both ardent and hopeless. David Wilson-Johnson picked his way through and sent up the pitfalls of Don Inigo’s potential for bluster and pomposity with admirable élan, on the back of the open legato and lyricism of his flexible baritone and some lightly anarchic comic timing – at which he is no slouch.

I’d not seen or heard Jacques Imbrailo in a comic role before, but he handled the slowly-stirring alpha-maleness of the not very bright but very strong Ramiro with an easy, self-deprecating humour, and his gradual awareness that Concepción might be a femme charmante would have struck a chord with all shy types. Anyway, you easily heard and saw why he became another notch on Concepción’s bedpost. The wit and double-meanings in the uncredited English translation were a joy, flagging up a good time had by all – and not just by Concepción.