Do these three works have anything in common? They were composed or premiered in 1911 and each is deeply unconventional for their time. Mind you Der Rosenkavalier and Elgar’s Second Symphony also saw the light of day in 1911. Quite a year!

The BBC Symphony Orchestra was right, as part of its Sibelius symphony cycle, to focus attention on the unconventional because that is what the Fourth Symphony is. It is also deeply disconcerting. Nothing prepared the first audiences for such a soundworld: “dismal and doleful” wrote an American critic; and Sibelius commented that it was “a protest against the compositions of today. Nothing, absolutely nothing, of the circus about it.” He was annoyed at what he was hearing on his many travels around Europe and sought to put forward an alternative style of music. This can be linked to his growing admiration for Schoenberg’s own declaration of independence from his German and Austrian peers. Although Sibelius did not hear Schoenberg’s First Chamber Symphony, written in 1906, until 1914, both that work and his own Fourth Symphony share an uncanny desire to unite symphonic material in tightly constructed ways so that the traditional four movements become almost indivisible.

Sibelius binds his symphony through the use of the tritone for music of such instability and alarm that casual listeners literally are deterred from ever repeating the experience of hearing it again. Sibelius hit the nail firmly on the head. “My new symphony is not a concert item but it has bought me many friends.” Quite why Sibelius decided to destabilise his latest attempt at writing a symphony remains open to conjecture. But I feel on safe territory to suggest it has nothing to do with the Finnish landscape or climate but everything to do with a desire to ‘belong’ to the new European heartland of musical culture as defined by trends coming from Vienna and Berlin. It is also possible that the austerity in this work was the result of the composer’s need to abjure, on doctor’s orders, from his favourite cigars and alcohol.

In any event the music we hear today stands as a monumental statement for resistance to suffering. Conductors take various paths in illustrating this facet. Kirill Karabits, in only his second assignment performing this work, offered a fresh and startlingly new way in guiding us through the labyrinth. In fact by delineating between the two basic tempos in the four movements – slow-fast-slow-fast – he was returning to a Finnish conducting tradition as heard in recordings from Georg Schnéevoigt (1934) and Tauno Hannikainen (1957), both of which are deeply authentic. Hence the slow-burn of the opening heralds an expansive vista of contrasting emotions, culminating in Karabits’s demonic finale where everything exploded into a shattering climax before subsiding to an inconclusive end, slightly slowing en route just to upset the purists who like the tempo to be sustained. No matter. This was a masterly interpretation that marks Karabits out for further consideration as a Sibelian of true stature – and there are not too many of those today. 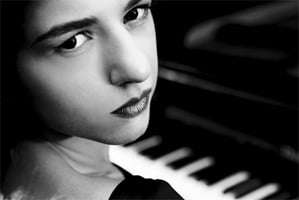 The concert planners kindly allowed an interval between the rigours of the Nordic giant and the frivolities that followed. Khatia Buniatishvili is a young tyro who seems born to perform Prokofiev’s First Piano Concerto, very possibly as the composer did himself to secure the Anton Rubinstein Prize, much to the annoyance and consternation of members of the audience and jurors. Fingers and hair flew in equal measure providing a whole range of reasons to sit and back and enjoy the ride. This is music for a pianist to display their virtuosity: Buniatishvili was on top of the demands from the very beginning and some of us worried if she would remain safely seated. Even more ability in her encore, the finale of Prokofiev’s Seventh Piano Sonata.

Karabits and his BBC players were attentive followers of this journey through the wild side and concluded the concert with the 1947 version of Stravinsky’s Petrushka. Early Russian audiences were nonplussed when listening to this series of orchestrated folksongs, long familiar to their ears. This stream of melody, so highly inflected by the emerging genius of the composer, can become a little wearisome but with Karabits pushing his players to the limit through sheer energy and joie de vivre the work emerged as a most enjoyable romp, as the ballet does when danced properly. The BBC Symphony Orchestra was remarkably agile in responding to the different demands placed upon its shoulders. Illustrating shadows and darkness in Sibelius then the exuberance of the Stravinsky is a challenge not lightly undertaken, let alone following a mercurial soloist in Prokofiev. This was a concert of changing emotions that reflect the world we live in today.