When this concert was first announced (only to be revised fairly soon thereafter), the work that caught the attention was Schumann’s ‘Rhenish’ Symphony. Given Oliver Knussen’s specialisation in conducting twentieth-century and the very newest music, it would have been fascinating to hear a nineteenth-century ‘classic’ from him, possibly unearthing details rarely heard, for this concert reminded of his musical scrupulousness and technical clarity.

Having opened with music by Knussen himself – rarefied, graphic, lyrically entrancing and scintillating – the programme was notable for an early revival of George Benjamin’s Dance Figures (2004), which was given its UK premiere at BBC Proms 2006 conducted by David Robertson. Conceived as both a work for choreography and for the concert-hall, Dance Figures (first heard in Chicago conducted by Daniel Barenboim), whether in wisps of sound, pungent sonorities, hard-edged rhythmic bite (not unlike some of the wilder of Pierre Boulez’s Notations that he is bit-by-bit orchestrating) or richly sepulchral lyricism, is a compelling work of inviting invention and orchestral mastery (as Knussen’s ‘Higglety Pigglety’ compilation also is), one full of contrast and variety in which the nine sections add up to a related whole in which even the notated silence between numbers 6 and 7, especially when Knussen maintained tension through it (conducting it as if sound) intensified continuity rather than emphasising the composer’s description of Dance Figures as being in two parts.

Of the other two works, Benjamin Britten’s Sinfonia da Requiem wasn’t a ‘first’ for this orchestra and conductor and seemed an ‘easy’ substitute for the Schumann. Nevertheless, from the thunderous and growling opening, Knussen sculpted a taut and intense account that was also able to ‘transport elsewhere’ before unleashing a demonic ‘Dies irae’ that retained musical focus and transparency of detail before the light-bringing transcendence of ‘Requiem aeternam’. 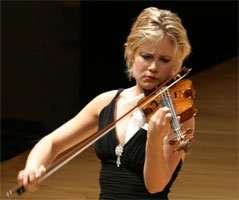 As it turned out, the Britten was sometimes less than pristine in execution when set against the impeccable standards set in the first three works – the occasional slips that bit more noticeable when the conductor has been particularly demanding. Thus the complexities of Berg’s Violin Concerto had been revealed with startling resolution and sureness. In companion to Sinfonia da Requiem, which Britten dedicated “to the memory of my parents”, Alban Berg’s Violin Concerto is “To the Memory of an Angel”, Manon, the daughter of Alma (Mahler’s widow) and Walter Gropius, who died aged 18 in April 1935, the year in which Berg would also die, at the age of 50.

It tends to be that performances of Berg’s final completed work are overtly emotional and less than rigorous or painstaking and a little cool. This one was the perfect marriage – appreciating and revealing Berg’s compositional method and digging deep into the composer’s depth of response, a performance in which every aspect of the scoring was meaningfully in place, and so thoughtfully ‘sounded’ (even down to a pair of small, military-band-type cymbals to give just the right edge). Leila Josefowicz was very much ‘first among equals’, and sometimes the violin soloist in a ‘concerto for orchestra’, but her ‘personality’ shone through with unforced concentration, her lack of domination put the music first. Maybe the Viennese dance-music that grows into the first movement was a little too ‘roughed-up’ and one or two slides a touch exaggerated, but rarely has the piece been so seamlessly presented (tempos and transitions unimpeachably judged, the quotation from Bach arriving from nowhere rather than being ‘presented’): a realisation so touching, emotionally assaulting and fastidiously arranged.