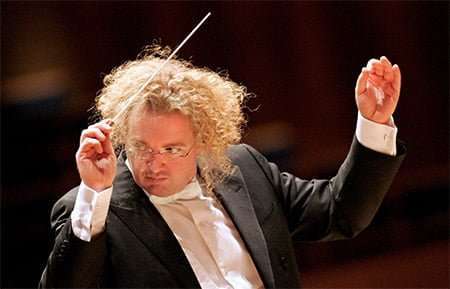 Four little fables and a cautionary tale made for a glowing Gallic evening, exquisitely delivered by what might be termed ‘pro-am’ forces. Not that the nineteen-strong clutch of the Royal Academy of Music’s finest could possibly be termed amateur except in the purest sense of the word, for they delivered the solo and chorus roles in L’Enfant et les sortilèges like the assured professionals most, perhaps all, of them are set to become.

In truth, Ravel’s second one-act opera (after L’Heure espagnole) presents a somewhat idealised view of how a naughty child might emerge from a tantrum; but then this is fantasy, not the Jean Piaget handbook. Like Saint-Exupéry with Le Petit Prince, L’Enfant et les sortilèges saw the novelist Colette create one of those delicate French tales that manages to touch the heart without smearing it in cloying sentiment. While in sensitive hands it can work brilliantly as a staged opera, its fantastical imagery can be just as powerful in concert form. In the latter case, though, what it emphatically does not need are visual distractions of the kind French “live film and video conception” guru Jean-Baptise Barrière provided.

The Barbican Hall was darkened to accommodate fuzzy-felt projections that got everything wrong. First, rather than elucidating the story it merely illustrated it (a superfluous function given the presence of surtitles inches above the screen); second, it had all the imagination and polish of a low-grade home movie; third, its hyperactive nature gave me a headache. Which senses, I wonder, did Barrière want us to use? The visual clutter made it hard to focus on important things like the superb BBC Symphony Orchestra, whose account of Ravel’s lucent score conjured up images of infinitely greater definition.

The singing, by contrast, offered unalloyed pleasure through a succession of idiomatic and beautifully judged contributions. Jennifer France was equal to all the vocal gymnastics of the Fire and the Nightingale: unlike many bell-like high sopranos she characterised and inflected her music with colours that suggest she will one day flourish as a singer of melodies. Alice Privett was no less striking as a Shepherdess, and although Rozanna Madylus sounded a touch too feminine as the Boy she led the troupe with an easy assurance under Stéphane Denève’s supportive (and notably appreciative) direction.

The evening had begun with a battle for tousled-haired supremacy as the lion-maned Denève ushered hangdog actor Stephen Mangan to the platform for a performance of the Suite from Poulenc’s all-too-rarely-heard ballet Les Animaux modèles. Mangan was there to read the La Fontaine fables that inspired the four central movements – a task he undertook with skill and homespun charm, revelling in the Hilaire Belloc-like wit of Craig Hill’s new verse translations. A little discreet amplification allowed the actor to project his voice without affectation, his famed insouciance to the fore. Peter and the Wolf awaits his talents.

Denève, who appeared to delight in all his colleagues’ contributions, wrought stylish playing from the BBCSO in the moody opening number, ‘Le Petit Jour’ (Dawn), which he infused with a wash of lazy warmth, allowing Gareth Bimson’s solo trumpet to drawl with the languor of a tenor saxophone. By contrast the potentially chilling fourth section, ‘La Mort et le bûcheron’ (Death and the woodcutter), was more lyrical than morbid up to the moment when two piercing woodwind screams sent Death packing. Up to that point this, the longest of the six movements, had been marked by sweet shifts between the strings and woodwind as Poulenc’s lush, near-Hollywood score unwound.

Denève’s interpretation of this multi-faceted gem of a ballet was constantly affectionate, unerringly felicitous and irresistibly enjoyable. A BBC Radio 3 broadcast is scheduled for Sunday 14 July (Bastille Day): it will be a memorable and, above all, a video-free occasion – not to be missed.