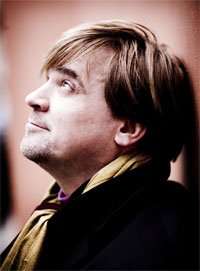 Music for brass, for strings, for clarinet and chamber orchestra and – only finally – for full symphony orchestra. This was the bill of fare for this BBC Symphony Orchestra concert conducted by the versatile John Storgårds. If there was a thread to this diverse programme it was “old forms in new music”.

Magnus Lindberg’s ‘old form’ is the passacaglia. Ottoni (the Italian for ‘brass’) was completed in 2005 for the Chicago Symphony Orchestra. Scored for 5 each of horns and trumpets, three trombones and a tuba, one might also think back to the instrumental music by Giovanni Gabrieli (who died in 1612). Ottoni begins in ‘cool’ (muted) style and develops a range of sounds and moods – ceremonial, richly expressive, exhilarating and sonorous – the trumpets, in particular, put through their paces. Sometimes the music seems to have ‘arrived’ but goes-on elsewhere, but over its 14-minute course the listener is appreciative of both the surface and the working out. The BBCSO brass-players enjoyed and reflected the limelight they were thrust into, benefiting from Storgårds’s thoroughly ‘inside’ conducting.

The conductor wasn’t so penetrating of Benjamin Britten’s still-astonishing Variations on a Theme of Frank Bridge, composed in 1937 (variations being a time-honoured form of musical expression, the theme ‘looked-back’ to being from Britten’s teacher Frank Bridge’s Three Idylls for string quartet, 1906). There was much to admire – as throughout the concert – in the high level of preparation, not least the incisiveness and intensity of the opening, the musicians bringing out shadows and anxieties; indeed there was a fine edge to this account and an impressive unanimity of purpose, but Storgårds rather indulged some of the slower music, stressing its repetitions but not to advantage, and was a little humourless in the pastiche Variations. Thus the final triptych (‘Funeral March’ – ‘Chant’ – ‘Fugue and Finale’) came off best, with genuine emotional sweep and exacting pitching, the ‘chill’ of the music unerringly caught.

Jukka Tiensuu (born 1948) has written both of his clarinet concertos to date for Kari Kriikku. The second, Missa (2006), has seven movements, each given a title from the Mass (‘Kyrie’, ‘Gloria’, ‘Agnus Dei’…). The composer does not reveal why. Scored for a ‘classical’ chamber orchestra with a soupçon of percussion (timpani, low-pitched tom-toms and some tinkling bells), the opening might be heard as some sort of mystical incantation. There are plenty of effects and atmosphere but not really enough compelling invention to sustain 33 long minutes (what a relief when Storgårds turned his score to the final page!).

Missa has its moments (the deft dialogue between soloist and orchestra in the fifth-movement ‘Sanctus’, for example) but they few and far between, other than some intriguing timbres conjured from the clarinet. But, what a performance! Kriikku was simply brilliant (not least in several improvised cadenzas), his dedication total, the members of the BBC Symphony Orchestra thoroughly in order, even if their required ‘whispering’ in ‘Credo’ seemed to go for very little.

William Walton composed Partita (1957) for the Cleveland Orchestra and George Szell, a perfect excuse to write a score of challenging bravura (breathtakingly met on these artists’ 1959 recording). Its three compact movements bear the titles of ‘Toccata’, ‘Pastorale siciliana’ and ‘Giga burlesca’, Walton referring to Bach’s harpsichord partitas to verify his intentions (and, maybe, not unaware of Roussel’s Suite in F, 1926, for design purposes).

Whatever the influences, Partita for Orchestra is inimitable Walton, and deserving of far more airings. Under Storgårds’s direction the outer movements didn’t quite come off, the first one possibly too swift but certainly rather smooth (and handicapped by gratuitous cymbal clashes), the finale too deliberately paced and not fully revealing of its cheeky and knockabout humour. The middle movement came off best – flowing yet hallucinatory and enlivened by breezy strings.