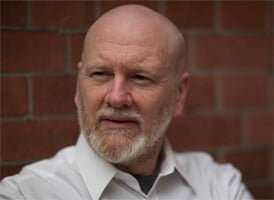 This was a good day. A separate report on the whole thing will follow from Nick Breckenfield. Meanwhile, some words on the final concert, itself something of a marathon, but very rewarding, as indeed was the entirety of this latest BBC Symphony Orchestra Total Immersion event. It was Brett Dean’s turn. One came away pleased to have caught up with several of his pieces – not least Wolf-Lieder (2007), after Hugo Wolf, which the composer had conducted earlier in the day, and his powerful and moving opera, Bliss (2009), preserved on film during its Opera Australia premiere, a stage-work that English National Opera would do well to produce. To have experienced a concentrated overview of Brett Dean’s music, a positive experience that should now prove an ongoing relationship.

It may be said that Brett Dean (born 1961 in Melbourne) relates to the world, not just numerous composer-forbears but also its ecology, wonders (natural and man-created), joys and tragedies, and its past. He writes though for today, with challenge and also an outgoing invitation for us to become involved. Dean is a viola-player by trade (he spent fifteen years with Berliner Philharmoniker, 1985-2000, and was there for the last few years of the Karajan era). The fourteen-minute Testament was written for a group that by 2002 was filled by his ex-colleagues in Berlin. At this BBC concert we were meant to hear the “orchestral recomposition” (2008) of Testament, but, unannounced, we were given the original for twelve violas, one of the BBCSO violists standing down to allow the composer to take part, in position number 10. Twenty-four bows are needed, twelve permeated with rosin, twelve without, the latter’s hairs not able to control the instruments’ strings, Dean’s intention being to suggest a “quill pen speeding feverishly over paper”, specifically Beethoven writing his Heiligenstadt Testament, his outpouring of grief regarding his worsening deafness. Dean’s music buzzes with activity then fragments to lyrical melody (courtesy of the rosined bows), the inner recesses of consciousness, before Baroque figures prism into a quotation from the slow movement of Beethoven’s First ‘Razumovsky’ Quartet (Opus 59/1). David Robertson conducted a semi-circle of violists in fine style (and maybe he and they would like to look at Benedict Mason’s BBC-commissioned Concerto for the Viola Section, from 1990, which made a big impression back then and is surely due a revival).

Letter-writing is also a feature of Dean’s violin concerto first heard in 2007 when played by Frank Peter Zimmermann. Renaud Capuçon has taken it up, and how! It’s a contest for a virtuoso, here gratefully engaged with. Dean is correct: letter-writing is a lost art, forsaken to texting and tweeting. The 35-minute concerto’s four movements are inspired by letters written by Brahms (love-related), Vincent Van Gogh (daily striving evaluated against high art), Hugo Wolf (self-loathing) and outlaw Ned Kelly (a public appeal for justice). The Brahms first-movement is based on the slow movement of his Fourth Symphony, harmonically misty initially but recognisably as only that work (great music, you see), then impassioned, a later Brahms passage turned into a potent wave. Van Gogh’s movement (tuned gongs a feature) is touchingly pitiful; Wolf’s lonely and regretful, oblique and fragile; and, finally, Kelly’s is urgent, harsh (maybe reflecting Australian landscape) and emotional, racing ever-faster to its bravura conclusion. Capuçon, large orchestra and indefatigable maestro did a terrific job.

After the interval, the 20-minute Carlo (from 1997 and then revised in 2011) was heard in its new version for mixed “live” chorus that replaces (or is an alternative to?) the original pre-recorded voices. Once again, Dean dialogues with a figure from history, this time the 16th-century Carlo Gesualdo, the progressive composer who murdered his wife and her lover, escaping punishment due to his royal status; he was Prince of Venosa. Carlo is a remarkable piece for a small choir (the BBC Singers were 20-strong) and a Metamorphosen-size string orchestra (23 players). Gesualdo and Dean are as one in the music’s contemplative, mysterious and ‘shocking’ harmonies, starkly beautiful, restless, eerie, and suggestive of schizophrenia, the bass singers digging deep and finding the profound, cavernous tones more associated with Russian and Bulgarian voices.

Finally the recent Fire Music (2011), lasting 32 minutes rather than the suggested 20, scored for full resources, some instruments away from the platform to form an antiphonal and surround presence, and very well managed here, the far-away and up-above string quartet not amplified (as requested) save for in the densest passages and sounding very beautiful in its natural state. Inspired by the “Black Saturday” fires that swept through the state of Victoria that destroyed much bush and taking many lives, the opening is strange, a warning of impending disaster, the music growing from all directions, engulfing the listener in aural conflagration. There is then a long section of stillness, maybe suggestive of a wasteland, flute-sounds (transferring from the platform to the two sides of the Hall) and electric guitar prominent. Trumpets sound another alarm, the music pulsates once more before final (uneasy?) serenity closes this thrilling and affecting piece, given a heroic performance under David Robertson to close a concert that only the BBC could have mounted and preserved.