Ladies of the BBC Singers 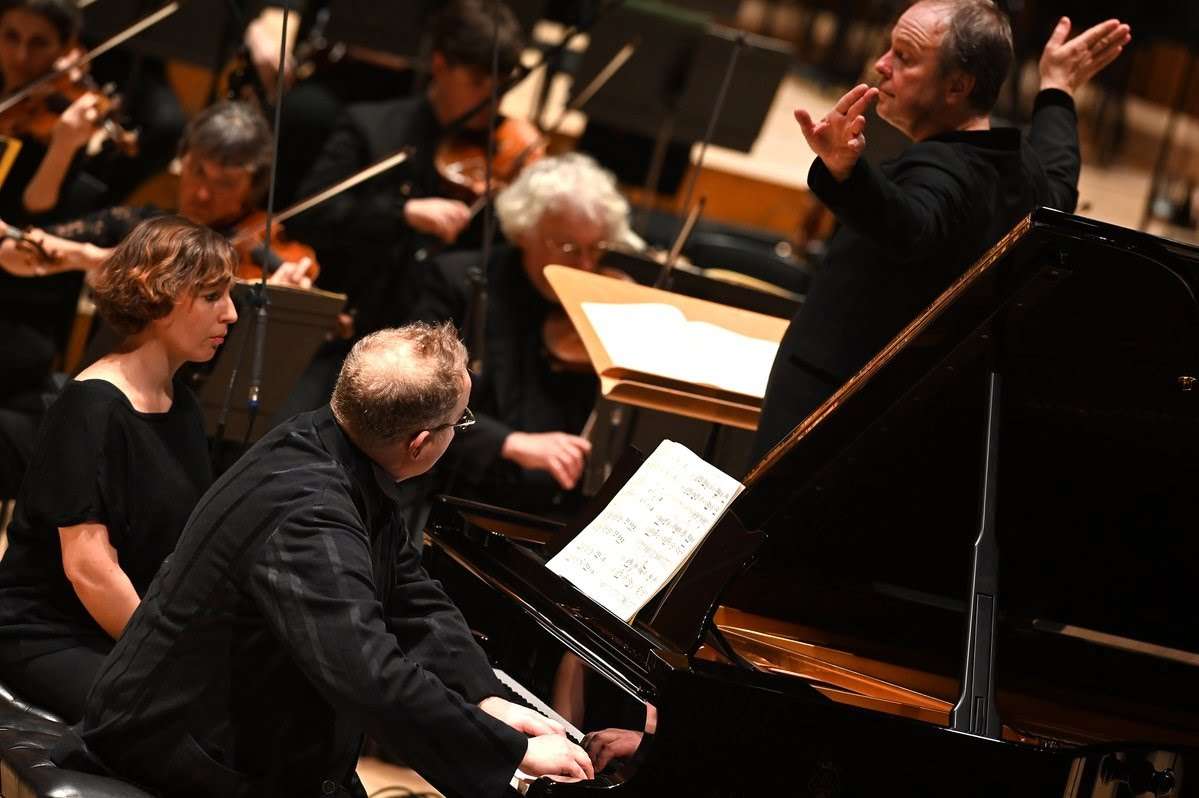 “You know”, George Benjamin remembers Ligeti saying, “I have no confidence in myself … I know I should, but I don’t. I’m basically doing all I do in the most amateur way, just trying to realise something that I imagine in my ear, in dreams. I use techniques, of course, but I forget them after writing and I have no overall scheme or permanent procedures.”

Exercising one’s concentration, this BBCSO closing concert to the latest Total Immersion day was a cleansing breath of fresh air, together with a weighty programme book (Ivan Hewitt’s notes repaying study) offering a timely overview of the strange life-journey and seismic leviathan that was György Ligeti (1923-2006).

Growing up in the seething pit of torn, occupied, communist Europe on either side of the Second World War (he didn’t leave for the West until escaping Budapest in 1956), Ligeti was a man who single-mindedly, restlessly, came to do his own thing. Sometimes well before the rest caught on. He denounced where others feared to tread – serialism, for instance, later post-modernism. He introduced us to shifting plains of sound, to vast, scarcely moving, continuums. He journeyed the thresholds of silence, the physical limits of instruments, he lived voids of deep space that more than once were like looking through either end of a telescope at the same time. The sum total of his maturity was an extraordinary cosmos of edifices, images and extremes beyond extremes. Meetings and crossings, subterranean valleys, rainbows of splintered glass, violent, stretched dynamics whispered rustles, desolate voices, babbling ‘tongues’, registers confrontationally apart, seeds of life viewed backwards and forwards, the linears and verticals of sound, time suspended, time hurtling on. 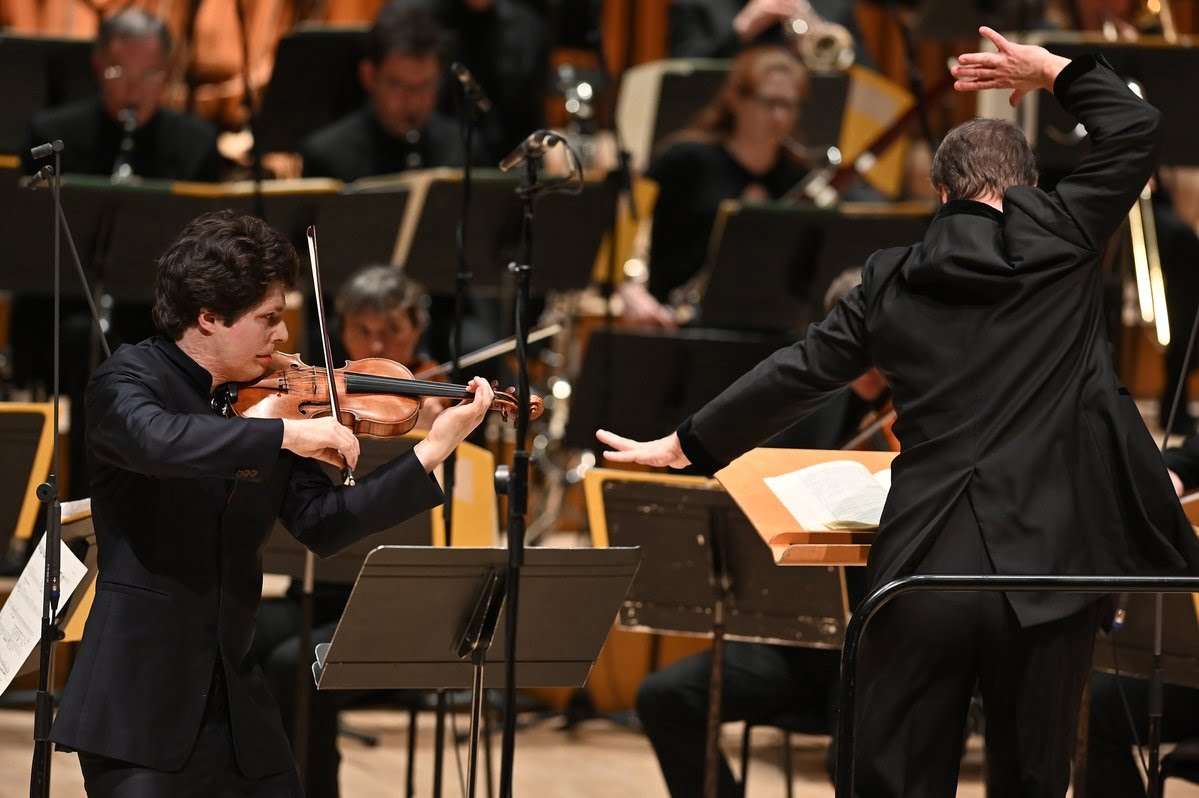 Benjamin speaks movingly of “sensations of flight, weightlessness, spiralling freefall … a magical world of illusions and mirages”. The orchestral and vocal works – like the Études for piano, begun in 1985 (oddly omitted from the day’s events) – traverse this and much more. Ligeti may perpetually have had doubts about himself (what composer doesn’t), but his internal clock and inherent ‘rightness’ of action was uncanny, Beethovenian almost. Breathed, breathless, the voltage never drops for an instant. “I almost always associate colours, form and consistencies with sounds and vice versa also associate all acoustic sensations with form, colour and material properties. Even abstract terms such as quantity, relationships, coherences and processes appear to me to be sensualised and have their place in an imaginary space.”

The complexity of Ligeti’s thinking, the uneasy, disturbing psychological autobiography he can let loose, the interplay of metres and rhythmic cells, tunings and mistunings, tempos and ideas, whole scenes of life and incident, in radical, simultaneous conflict, the graphic detail of the printed page, give players a tough ride. There is nowhere to relax or ease the pressure. Every inflection and balance is critical. Every silence matters and has its own tension. Even, sometimes especially, the silences following endings.

The BBC Symphony Orchestra, after two-and-a-half hours giving its all, punctuated with elaborate platform changes and delicate microphone repositioning (the engineering crew quietly unflustered), must have been exhausted. But, in time-honoured fashion, since Adrian Boult in the 1930s, principals and ranks rose brilliantly to the challenge.

In best Boulez tradition, Sakari Oramo – hands only in the Concertos and in Clocks and Clouds – gave a conducting masterclass, directing with minimum fuss and the clearest, simplest of beats. Start from nowhere, forge a time-envelope, cue as necessary, hold the pauses, letting neither orchestra nor audience breathe until his body language says so, was the impressive message of the evening. Easy to observe, easy to say, infinitely harder to put into practice.

Bridging a period from 1961 to 1988, the five-work programme was neatly structured as a Bartókian arch, with two five-movement Concertos and a central contrast framed by Atmosphères and San Francisco Polyphony, the one ending with brushed piano strings on the verge of inaudibility (artfully exemplary in this realisation), the other with a bang, the final up-rush curiously reminding of the sort of energy Sibelius generated, albeit through very different means, at the end of the first movement of the Fifth Symphony.

Clocks and Clouds (1972-73), nearly fifty years with us, essays a philosophical thesis (Karl Popper’s) through metaphor and whisper. “It’s like the grandeur of the heavens”, Hewitt says, “huge, intricate, yet utterly quiet.” In this testing delineated score, the women’s voices of the BBC Singers, twelve in number, proved miraculous, the alto interjections numbingly placed and dark, coalescing out of the shadows of some broken Europe film noir. 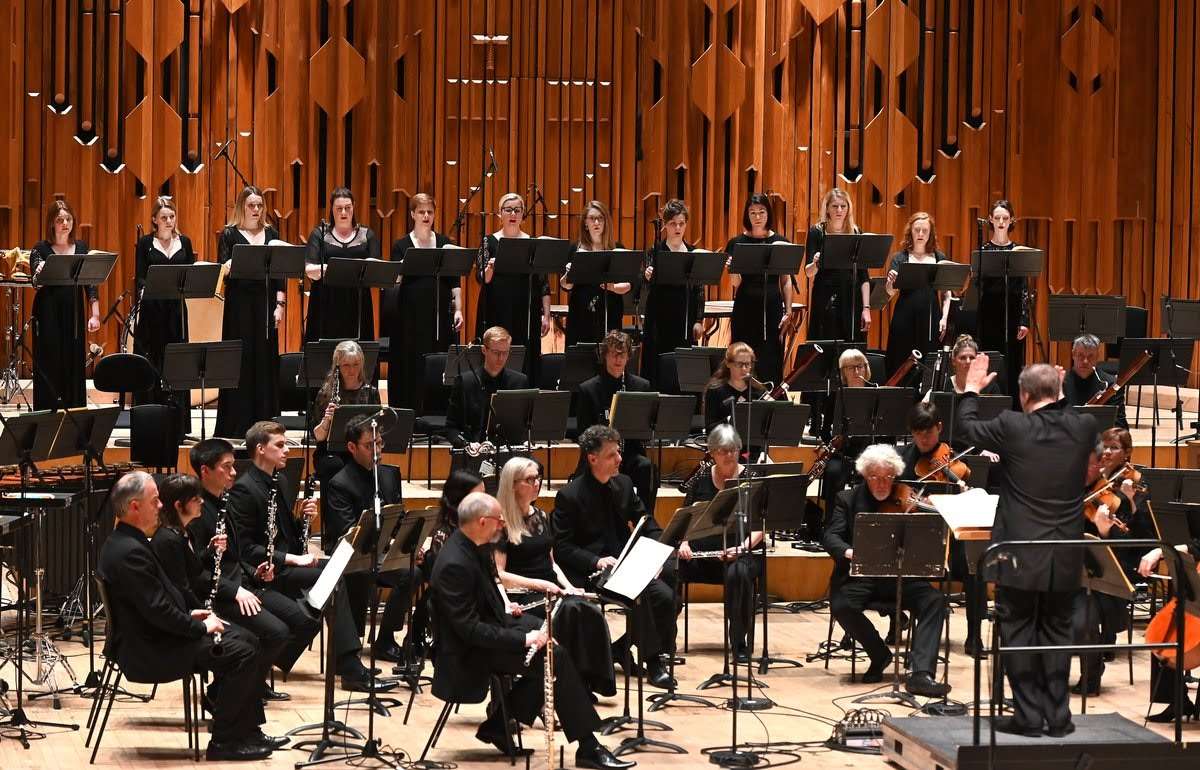 Approaching modern popularity, the Violin Concerto, written for Saschko Gawriloff, plays with the familiar and unfamiliar, fragments of tune (poignantly beautiful in the Hungarian-inflected second movement ‘Aria’) and opposing soundworlds wedded through the composer’s absorption and transmutation of anything, any vibration, any nuance, from a range of encounters taking in a trajectory from Melanesia and Southeast Asia, through Thelonious Monk and Harry Partch, to Shostakovich’s Fourth Symphony – a nightly listening activity Mahler would have identified with as much as modern-day web-surfers. The final alchemy is original, nothing is quoted, nothing is predictable. Augustin Hadelich (1723 Ex-Kiesewetter Stradivarius) gave a seriously considered account, his belief in the work committed and intense, and his dispatch of Thomas Adès’s arresting closing cadenza (replacing Ligeti/Gawriloff’s in the published score), down to a nod from Enescu, absorbingly commanding. Comedics not being his speciality, Oramo not being Rattle, Kopatchinskaja’s spatial theatrics (in Berlin, 2017) were not for the witnessing.

Ligeti maintained that his late Piano Concerto (1985-88) presented his “artistic credo … The spell of time, enduring its passing by, closing it in a moment of the present, is my main intention as a composer.” Nicolas Hodges worked notes, ensemble, the whirl of independent lives, hard, the all-too-present risk of “an exuberant machine whose many spinning cogs start to skitter out of control” (Hewitt) not fazing him. “Flying” action, “illusory rhythmics and illusory melody”, “slanted equidistant harmony [and modal] fields” (Ligeti) … Everyone got home. Even the page turner, whose otherwise agitated ‘flung’ actions bordered on the visually distracting. Faced though with a score like this, who honestly can blame her.

Mysteries of the Macabre and a touch of the Miss Hannigans? Not this time. But an elemental evening, handsomely supported.