Jiří Bělohlávek and the BBC Symphony continued their current season with this nominally all-Czech programme including a couple of rarities, notably the Fantasy (1902) which is the nearest that Josef Suk came to essaying a violin concerto. Not that Fantasy is necessarily small-scale; indeed this performance had a scale and impact making it more imposing than previously thought. The three main sections – an emotionally-charged ‘rhapsody’, an alternately wistful and whimsical ‘intermezzo’, and a virtuosic ‘finale’ – are framed by a tempestuous introduction and coda in which the principal ideas are respectively set out before being brought to a heightened apotheosis, and in which the effective multi-movement integration of the overall work is made plain. The gulf between this and Suk’s crowning orchestral works suddenly seemed less wide.

Not the least factor in so realising these formal credentials was the balance attained by Bělohlávek between an emphasis on detail and shaping the larger paragraphs into an ongoing and cohesive whole. Ivan Ženatý played with a sure command of the solo part’s exacting requirements – his momentary lapses in intonation as little compared to the expressive fervour he invested. 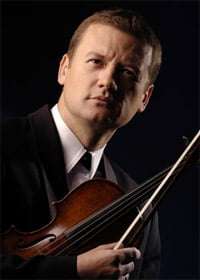 Suk’s orchestral output divides inevitably into ‘Asrael and after’, with the earlier works often overlooked, yet the present performance certainly suggested that Fantasy warrants closer investigation.

Bělohlávek had opened the programme with a powerful rendering of the overture to Smetana’s opera “Libuse” (1872) – the most self-consciously nationalistic of all his operas and one which has thus failed to ‘travel’, though the combination of imperious fanfares (something clearly not lost on the young Janáček) and impassioned melodic directness suggests no lack of intrinsic musical worth.

Mahler never seems to have conducted the opera, but he had a strong attachment to its predecessor, “Dalibor” – not least, surely, as a means of underlining his Bohemian ancestry and cultural background. Something of this comes through in his early song-cycle “Lieder eines fahrenden Gesellen” (1885), in which the notably darkened timbre of Dagmar Pecková was gainfully employed. The opening song was limpidly affecting, though the second seemed a little tardy in its initial evocation of the joys of Spring while the dramatic third felt unduly reigned-in until its suspenseful coda; here preparing seamlessly for the funeral march-cum-invocation of the closing strings. Excellent playing from the BBC Symphony Orchestra (strings effectively reduced) and, again, a performance where the whole was more than the sum of its parts.

What to say about the ‘New World’ Symphony (1893) – ostensibly the first great American symphony, though as innately Czech as any of its predecessors and ‘native’ only in the contours of its themes. Bělohlávek’s interpretation was sincere and idiomatic without drawing attention to itself in any particular. After a soulful introduction, the opening Allegro unfolded organically and at a relatively deliberate pace (which likely explains the absence of the exposition repeat) though with no lack of drama in the coda, and the Largo – abetted by fine cor anglais playing from Alison Teale – had the right degree of suffused nostalgia to be truly affecting. Crisp and purposeful, the scherzo was at its best in the whimsical trio, with the finale’s tendency to overt rhetoric held in check until the coda – where Dvořák’s tying together of the thematic threads made for a truly gripping apotheosis.

Not a revelatory performance, then, but a highly satisfying one which evinced many of those qualities that have already marked-out the partnership between orchestra and conductor. Now extended until at least 2012, the opportunity to programme some of Dvořák’s earlier symphonies is there for the taking.