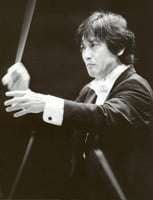 A slightly unusual choice of works for a “BBC Family Music Intro” concert, maybe – including a substantial new piece and one of Tchaikovsky’s lesser-known if most-masterly works. It was probably Night on the Bare Mountain that was the main attraction for anyone new to this concert-going lark, so it was a shame that quite a few latecomers missed it! This was a rare outing for Mussorgsky’s original (in every sense) version, an unruly if utterly distinctive piece (that was to be tamed and regularised by Rimsky-Korsakov). Kazushi Ono treated it as a flamboyant showpiece, initially attractive but too unrelenting by it close.

For all that Ono knew the Mussorgsky and Tchaikovsky as standard repertoire and lavished much attention on both, as well as care and sensitivity on the latter’s Byron-inspired masterpiece – with a reciprocal response from the BBC Symphony Orchestra – there were elements missing from both performances. In Manfred, it was tragedy and transcendentalism. Ono was clearly aiming to conduct a ‘real symphony’ and his regard for transitions and tempo relationships was admirable; yet there was a lack of weight at the most sonorous moments and, if anything, too much concern for the wholeness of the music (given without cuts or tinkering) not least when the music is crying out to be let off the emotional leash and be vividly descriptive.

The deft scherzo was just a little careful (if ideally preparing for the trio) and the pastoral slow movement was decidedly swift (if still managing a shapely oboe solo), the bucolic interludes (reminding of Berlioz’s Harold in Italy) somewhat thrown away. If the Bacchanal that launches the finale garnered greater excitement and some incidental beauties (ravishing roulades from the harps, for example), the point of transfiguration was curiously underplayed, the organ barely making any impact (even if – by design? – it was akin to the harmonium that Tchaikovsky seems to have wanted at this point) and the closing bars were paraded without significance.

Matthias Pintscher’s latest opus proved to be typical of its composer in the fastidious soundworld created. At 25 minutes or so (a little longer than suggested), Pintscher’s command of a large orchestra (including much adept use of percussion and some exotic woodwinds) was never in doubt, nor his precisely realised sonorities. pourquoi l’azur muet … (why the blue silence), setting Rimbaud, is “a kind of suite” drawing on Pintscher’s 2004 opera “L’espace dernier” (The Last Space), based on Rimbaud’s “life and poetry”.

There was much to delight the ear and enrapture the senses, not least the writing for the two vocal soloists, both singers on top of Pintscher’s demands and relishing the text. Yet there was little or nothing that has not been heard before, the use of bowed cymbals now seeming old-hat; even the use of the Lion’s Roar immediately brings Varèse to mind, and Berio and Nørgård when the accordion adds its distinctive timbre. However, in terms of Pintscher’s own development, it all seemed over familiar from previous works. On its own terms, though there was much to delight in and, for all the ‘incidental’ ear-catching textures, Pintscher has a sure hand in developing dramatic intensity and climactic tension with genuine theatricality. This world premiere performance, given in the absence of the unwell composer, seemed as minutely prepared as is the music itself.