George Bernard Shaw once claimed that the English had a creepy love of Requiems. If the size of audience for this concert was anything to go by the same still holds good, since this programme, described as a “Dialogue across the Centuries”, effectively comprised three Requiems. The briefest of them but most eloquent was that for Ockeghem by his pupil Josquin, then one by Pierre Boulez for his friend and colleague Bruno Maderna, and finally Mozart’s, the work’s genesis long the subject of endless speculation but was commissioned by Count Walsegg-Stuppach (who wanted to pass it off as his own) in memory of his wife Anna.

Josquin’s memorial for his teacher Ockeghem dates from about 1497. It may only last about six minutes but there is a heartfelt quality to it that does indeed speak across the centuries. The text by the Burgundian poet Jean Molinet is about the passing of Ockeghem as the loss of a father and is framed by lines from the Mass for the Dead. The very ending – “May he rest in peace / Amen” – is wholly remarkable, evoking with extraordinary directness the intense sense of bereavement which Josquin felt. With 32 singers this performance was hugely impressive in its weight of sound but one sensed that ensemble might have been more seamless with a rather smaller group.

By contrast with Josquin’s tightly coiled emotion, the much longer Boulez Rituel in memoriam Maderna seemed cerebral and uninvolving despite the sophistication of its construction and the composer’s skilful handling of eight orchestral groups. Rituel was composed in 1974 to a BBC commission, so it was wholly apt that it should be returned-to by the orchestra which gave its first performance and under a conductor who has recorded the work.

Heterophony – a type of texture characterised by the simultaneous variation of a single line but realised in multiple voices, each of which plays the melody differently, is characteristic of much Far Eastern music, especially the music of Thailand and Japanese Gagaku, and it became a standard technique for the post-war European avant-garde. In the case of Rituel the work is held together by the hieratic pulsing of percussion including gongs and tam-tam and by a 14-member brass choir which lead the chordal chants of the odd-numbered sections.

This may be Boulez at his most accessible, a distant echo of Messiaen’s Et exspecto resurrectionem mortuorum, but even in as sympathetic a performance as this, one admired but was ultimately left untouched; for this listener at least, however elaborate the construct, the effect was as sterile and devoid of emotional interest. David Robertson managed the vast forces with enormous aplomb, evincing a fine sense of what needed to be conducted and what should be left alone. For the most part the BBC Symphony Orchestra responded in kind although there were a few moments of distinctly scrappy string playing.

A world away was David Robertson’s reading of Mozart’s “Requiem” in Süssmayr’s completion. Despite the scale of the forces employed – the choir numbered 140 – this was a sprightly affair with forward-moving tempos, a welcome antidote to those overtly-reverential performances which used to be the norm. Whilst it was certainly rhythmically alive in every fibre and Robertson is clearly an inspiring choral conductor, this occasionally led to a degree of over-forcefulness. 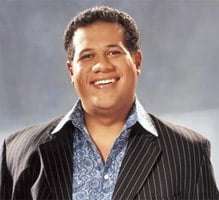 The ‘Dies irae’ and ‘Rex tremendae’ sounded closer to Verdi’s “Requiem” than to Mozart’s; elsewhere the big choruses had a sturdy Handelian quality which worked well. However, it was the score’s quieter moments such as the opening of the ‘Lacrimosa’ which linger most in the mind and the subtle close of ‘Confutatis’ (O care for me at mine end) that was perfectly achieved.

The solo quartet, four young UK-based singers of whom the bass-baritone Jonathan Lemalu is probably the best known, were for the most part excellently matched, proving the point that you do not need to have an all-star line-up. Ironically it was Lemalu who was possibly miscast, the ‘Tuba mirum’ lacking that imposing quality which a true bass can bring to it (and not helped by a slightly tentative trombone solo). By contrast, Ed Lyon immediately imposed himself in the same movement and Anna Stéphany and Elizabeth Watts, both Ferrier Award winners, blended perfectly in ‘Recordare’.