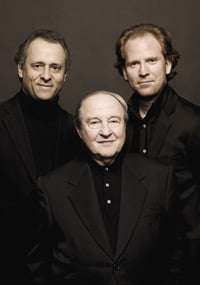 The Beaux Arts Trio is in its fifty-third and final season, with this lunchtime concert marking its Wigmore Hall farewell. Though Daniel Hope and Antonio Meneses will doubtless return in other capacities, the real farewell was for the 84-year-old Menahem Pressler, founder member and ever-present.

With Pressler at the piano the Beaux Arts recorded the ‘Archduke’ twice – once in 1965 and again in 1979. It is arguable that his sense of poetry and structure is as good now as it ever has been, his playing conveying the greatest sensitivity despite the occasional and completely understandable mistake.

Immediately apparent was the sense of Beethoven’s scale in the trio, portrayed not through over-expansive tempos or dynamics – though the former was occasionally employed – but through assured nobility. Hope and Meneses offered ideal support to Pressler, always sensitive to his nuances of phrase and occasionally playing within themselves when his style became more graceful. Yet when lower-register violin and upper-register cello met the join was seamless, and they paced the first movement’s mysterious central section to perfection.

So too in the important transitional period between slow movement and finale, one of those moments of stillness that only Beethoven seems able to achieve. Having found a rare poetry in the deceptive simplicity of the preceding Theme and Variations, Pressler nudged the tempo forward ever so slightly until the Allegro burst through. Yet here the musicians were careful not to resolve Beethoven’s music too early, and not until the final bars was there a full sense of conviction. This was also the case in the scherzo, where the false ending was perfectly judged, and whose creeping trio theme had a sinister undertone as it unravelled through Meneses’s cello. Indeed, at no time did the players over-project, the coiled energy remaining unreleased until those final chords.

The ‘Kakadu’ Variations portray a very different musical story, yet here too in the slower music Pressler found exquisite restraint to carry the rather stark introduction.

The clarity of his thematic exposition was matched again by Hope and Meneses, who offered tasteful ornamentation when it came to their turns to take up the theme. The only thing lacking was humour, and as Beethoven’s strings swipe through the piano part in a playful variation this was done with aggression rather than roguishness.

Yet it was the ‘Archduke’ that was this recital’s crowning glory, and was followed by encores from Shostakovich and more Beethoven, a fitting tribute to the Beaux Arts Trio, whose music-making has touched the Wigmore Hall on so many occasions.