Returning to Carnegie Hall for the first time since his sensational appearance in 2016, the young Uzbek pianist Behzod Abduraimov offered a recital consisting of Chopin’s 24 Preludes, Opus 28, the Children’s Corner suite by Debussy and Mussorgsky’s Pictures at an Exhibition, each providing ample opportunity to combine breathtaking technical agility with a captivating rhapsodic air and extraordinary expressive intensity. 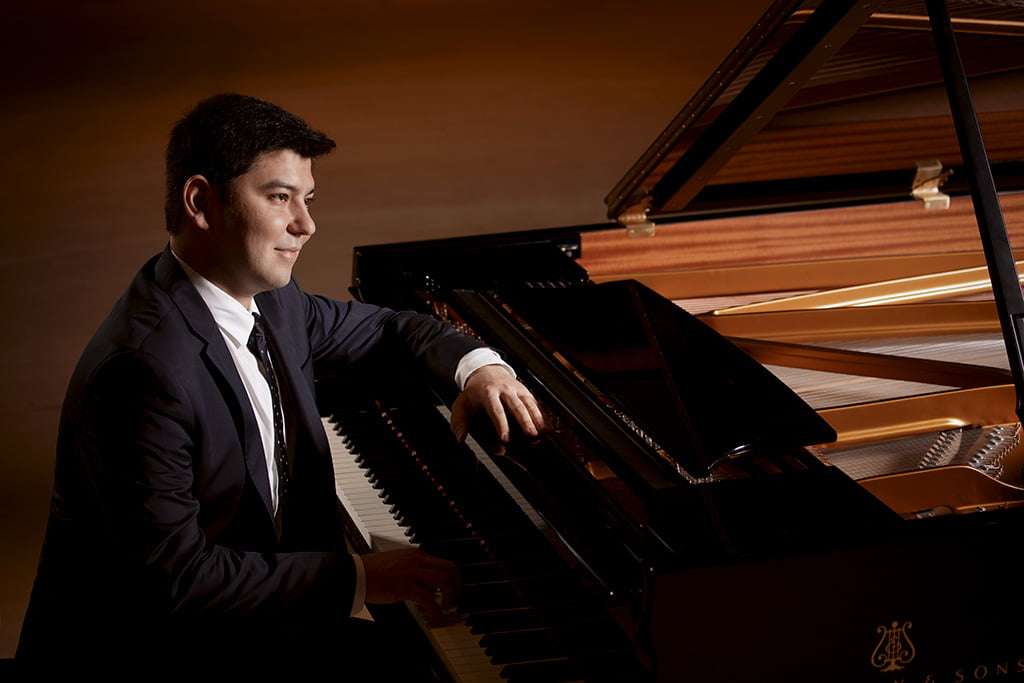 Abduraimov attacked the Chopin Preludes with youthful energy, embellishing the character of each Prelude with sometimes emphatic, sometimes sensitive expression. Examples of slight hesitations and stretched phases were abundant in the weightier, melancholy pieces, such as the A-minor Second, with its meditative yearning; the B-minor Sixth, leaden with rising arpeggio-grounded melody; and the gently caressing lullaby of the F-sharp Thirteenth. Abduraimov’s reading of the ‘Raindrop’ Prelude (the D-flat Fifteenth) was most impressive, combining the lightest touch applied to the main theme with the starkly dramatic character of the middle section. In contrast, the faster preludes sometimes whizzed by at top speed. Most impressive in this respect were the Lisztian drama of the Eighth in F-sharp minor, the fury of the Twelfth in G-sharp minor, and the demonic Twenty-Second in G-minor. Abduraimov made much of Chopin’s alternation of slow and rapid tempos by pouncing into the latter after a dose of the former. His playing was nuanced, sometimes highly strung and both forceful and passionate. His take on the last Prelude, in D-minor, (which creates a haunting atmosphere in the 1945 film of Oscar Wilde’s ‘The Picture of Dorian Gray’) was simply awesome. Abduraimov set a rapid pace and brought the piece to a most thrilling conclusion, forcefully pounding out the last three low notes so that they sounded like a terrifying death-knell.

Debussy’s Children’s Corner suite was tame by comparison. Written for his daughter, Chou Chou, these six fantasy pieces each create a childlike quality in a variety of different manifestations. The first, ‘Doctor Gradus ad Parnassum’, is not merely a simple display of method and technique. Debussy attempted to characterize the complexities and rigors that make practice so arduous. Abduraimov whizzed through the piece quickly, with facility and fluidity imbued with interesting shades of dynamics. He stressed the serenity of ‘Jimbo’s Lullaby’, by which Debussy sought to put Chou Chou’s little felt elephant to sleep. Although beginning like an aubade, ‘Serenade for the Doll’ builds on strumming arpeggios to a strong apex only to gradually fade away. The balletic ‘The Snow is Dancing’ seemed to picture falling snowflakes as impressionistic fleecy fragments. Abduraimov coaxed a dreamy, jazz-like quality from ‘The Little Shepherd’, while taking ‘Golliwog’s Cake-Walk’ rather briskly, as if virtually embarrassed by Debussy’s spoofing of the ‘Yearning’ motif from Wagner’s Tristan und Isolde.

Abduraimov gave a masterful performance of Mussorgsky’s monumental Pictures at an Exhibition. At first a rather brisk ‘Promenade’ theme seemed to hurry us a bit too quickly past each of the paintings on display. But Abduraimov’s characterization of each of them was so impressive that soon the speedy pacing became less problematic. Overall, he raced through the fast sections with remarkable agility, especially in ‘Tuileries’, ‘Ballet of the Unhatched Chicks’ and ‘The Marketplace at Limoges’, all flitting by with chaotic ferocity. Abduraimov’s flexile phrasing was expansive in the superbly wrought ‘The Old Castle’. He seemed to downplay the trudging pace usually given to ‘Bydlo’ to stay within his generally energetic reading. In ‘Samuel Goldenberg and Schmuÿle’ a rather stark and angular characterization of Goldenberg contrasted strongly with the wimpy demeanor of his companion. Dark cavernous chords, given much weight, enhanced the atmosphere of ‘Catacombs’. A frenetic depiction of ‘Baba Yaga’s Hut on Fowl’s Legs’ was especially riveting as it proceeded forcefully to the magnificent opening of the final painting, ‘The Great Gate of Kiev’. Abduraimov gave the latter a sufficient measure of grandiosity and dramatic presence within the context of his brisk pacing. He spaced out the final chords with overwhelming grandeur, providing a fitting conclusion to a most engaging performance.