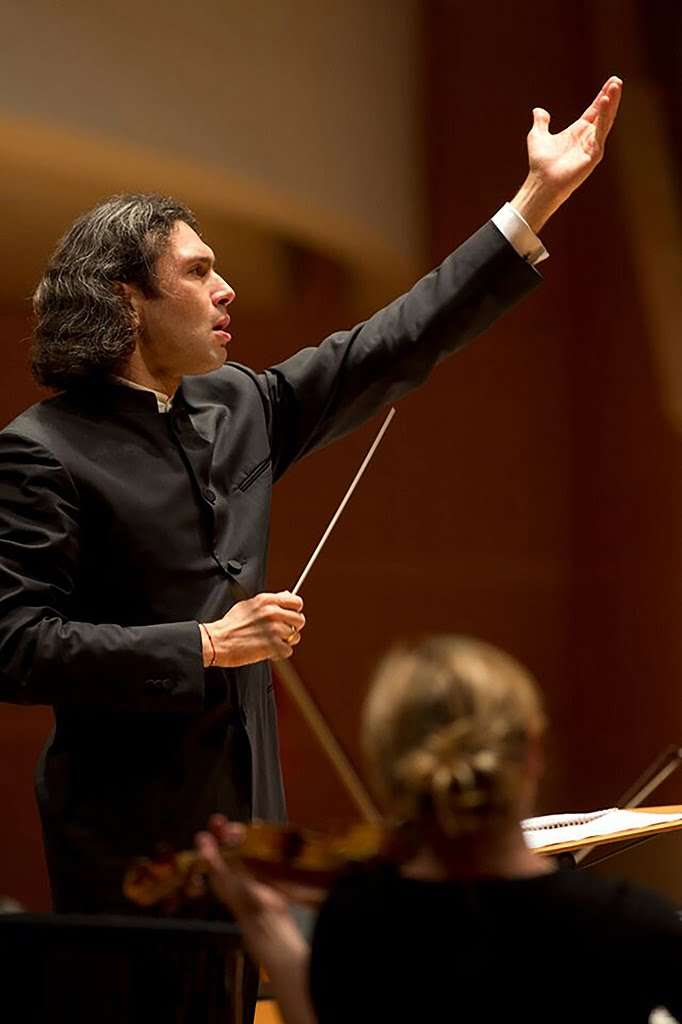 Creation was the topic of this London Philharmonic Orchestra concert, springing out of the Southbank Centre’s commodious Belief & Beyond Belief series, but its main point of interest was the LPO’s phenomenal adaptability to a spectrum of styles ranging from 1737 high-Baroque to 1985 large-scale fusion of Romanticism and Minimalism.

Apart from a harpsichord, a theorbo and a Baroque guitar, the small ensemble for Jean-Féry Rebel’s Les élémens used modern instruments, but with plenty of ornate French swagger. Rebel, contemporary with J. S. Bach and Handel, was nurtured at the court of Versailles where he became renowned for his ballet-pantomime spectaculars.

His simphonie nouvelle Les élémens was one such, a creation-myth depiction of primordial chaos yielding earth, air, fire and water, then moving swiftly on to the wonder of life, human life in particular. Vladimir Jurowski’s courtly conducting style included his use of a pole (which did for Rebel’s teacher Lully, who injured his foot during some vigorous beat-bashing on the floor, resulting in fatal blood-poisoning). The LPO caught the spirit of Rebel’s naïve and vivid description of Creation’s rapid establishment of order, with chaos memorably realised by all the notes of the octave sounded simultaneously, and with flutes and bird-warblers twittering amiably, the performance matched the courtly grace and fantasy of a Watteau painting.

The high point was ‘Air pour l’amour’, which, albeit with more overt sensuality, was the same destination of Darius Milhaud’s ballet-score La Création du monde. Taught by Widor, at the heart of progressive French music as a member of Les Six, and furiously prolific during his long life, Milhaud, like many a 20th-century composer, succumbed to the lure of jazz, especially in Création, first heard and seen (with designs by Ferdinand Léger) in Paris in 1923. The 18-strong ensemble has prominent roles for piano, brass and alto-sax (the latter played with bluesy confidence by Martin Robertson). Just as convincing was Jurowski’s sinuous shaping of the jazz-classical idioms, so that they complemented each other. There is so much Milhaud that it’s hard to know where to start, but, while you could easily hear Création purely as a backdrop to choreography, it stands just as well on its own.

The LPO was at full strength for John Adams’s Harmonielehre, bearing the title of Schoenberg’s harmony textbook but inspired by a hallucinatory dream Adams had about a huge oil-tanker rising out of the sea to sail through the sky. It is a masterly fusion, rendering the Romanticism infinitely more expressive than the familiar tension-building rhythms and block harmonies generally allow, and supplying a convincing alternative solution to Serialism’s debunking of tonality in the wake of music’s post-Wagner implosion. Jurowski perceived clearly the long shadow of Wagner looming over what is in effect a big three-movement symphony, confirmed by the title, ‘The Anfortas Wound’, of the second movement. The LPO’s stunning brass section added a convulsive percussiveness to Adams’s pounding rhythms in the first movement, and the ‘Anfortas’ music was full of gestures that would have been completely familiar to Bruckner, Mahler or Schoenberg. Very often, optimistic Minimalism irresistibly sweeps all before it. Here, though, the longing and sense of loss of what pre-dates it were equally potent.