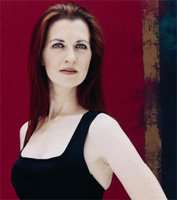 Successful at its première in 1829, “La straniera” is not now among Bellini’s best-known operas. Set in Brittany around 1200 it concerns Alaide (La straniera), illegally married to the King of France, who becomes the object of desire of Arturo, despite his betrothal to Isoletta. Arturo, besotted, tells his friend Valdeburgo of his love for the stranger. Valdeburgo turns out to be her brother. The outcome is that the French King’s legal wife dies, Alaide succeeds to her position, Arturo kills himself.

Surprisingly, the tenor has no aria. He is, though, important in ensembles. He is a strange character, almost literally madly in love with Alaide. In the clear, high-lying tones of Argentinean tenor Darío Schmunek, who combines elegant phrasing in subdued passages and a bright ring in more outgoing moments, Arturo’s desperation became more and more noticeable. It was Schmunek’s first association with Opera Rara, who recorded the opera in the preceding week. I hope it will lead to other appearances. As Isoletta, the woman Arturo rejects, Albanian mezzo Enkelejda Shkosa brought a warm, ample voice but not lacking in agility, as demonstrated in her aria ‘Ah! se non m’ami piu’ in the seventh scene of Act Two. After her duet with Valdeburgo near the beginning of Act One, Isoletta does not return until she sings that aria.

The role of Valdeburgo is larger, with an aria and duets with each of the other principals. Solid in tone, with upper notes skirting a tenor’s domain, Mark Stone sang with firmness and fullness, conveying the strength of Valdeburgo’s character, steadfast in his support for Alaide. This was the largest assignment that I have seen Stone undertake, and he performed it with confidence and vocal security.

Important as Valdeburgo and Arturo are, the role of Alaide is a glorious one, not because of a plethora of vocal acrobatics, though examples exist, but because she has some splendid Bellinian melodies in long lines of elegant cantilena. She has a beautiful introduction sung off-stage and concludes with an aria of flowing contours, ‘Ciel pietoso’, which Patrizia Ciofi spun out gracefully. Her whole performance was one to savour and, when the recording is issued, over which to linger. Phrasing eloquently, producing poised upper notes, she made a great impression. The supporting singers did well, with Aled Hall making Osburgo truly villainous and Graeme Broadbent conveying the Prior’s serious mien.

The London Philharmonic played stylishly, from rich string-playing to delightful solos for oboe in Act One and for flute particularly noticeable. The Geoffrey Mitchell Choir, the most frequent Opera Rara contributor, sang to the high standard one has come to expect. David Parry, a great enthusiast for bel canto who has done so much for Opera Rara over the years, brought the best from the performers and the music. Certainly “La straniera”, if not containing as many of the elements of the composer’s later operas that we think of as Bellinian (no duet for the two ladies, for instance), deserves greater prominence than is its present lot. The recording, due in a year’s time or so, will be worth acquiring.