The Bergen Philharmonic Orchestra made its first appearance at Carnegie Hall in over four decades. 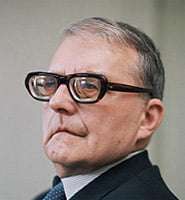 The concert opened with Shostakovich’s Festive Overture, a cheerful curtain-raiser from the now-defunct “glorious Soviet worker’s paradise”, commissioned shortly after the death of Stalin – but now thought to have been written as early as 1947. The opening had the trumpets not quite entering together, and the orchestra left a bit to be desired in the areas of ensemble and intonation – the violins, in particular, sounded ragged and frenzied in the fast passages – but Andrew Litton, who is entering his fifth year as the orchestra’s music director, elicited more than a few goose-bumps, employing some subtle (and not-so-subtle) tempo manipulations to very good effect.

Tjat (Chatter), by Norwegian composer Knut Vaage, employs a number of Penderecki-like ‘extended’ techniques, and dithers between dodecaphonic and tonal musical gestures above percolating ostinatos that seem to dissolve in and out at whim. It’s not every day that a short work takes an effortless 180-degree turn from Stockhausen-like complexity to the rhythmic drive of Lalo Schifrin’s film music! The placement of the work within the larger program seemed a bit odd – until it was over. Vaage’s orchestral bagatelle did leave one wanting to hear more. 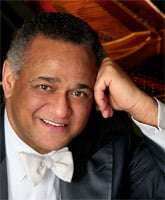 Edvard Grieg looms large among Litton’s predecessors on the Bergen podium, and his Piano Concerto featured for the rest of the first half. For André Watts, and Litton, the work is clearly not only in the orbit of Schumann, Chopin and Weber, but also Beethoven. It was refreshing to hear the work from a ‘neo-classical’ angle. Watts showed his signature technical command and brought refreshing clarity to not only the virtuosic barrages but also the almost sonata-like solo passages with the orchestra. His performance of the Adagio was particularly outstanding – as was the orchestral playing, especially the strings. The performance seemed all the more remarkable because the concerto is new to Watts’s concert repertoire – and his clear-headed, non-hyped approach sounds long-considered. Balances throughout were near-flawless.

Litton has frequently programmed the music of Shostakovich. The Fifth Symphony places considerable demands on players. The string-section fared far better in the first movement than they had in the Festive Overture, with intense and incisive phrasing, but the movement’s latter half was missing ominous intensity. The second movement Allegretto was a different story altogether: the orchestra played this “Leninist ländler” with real bite, driving home more than a passing similarity to Mahler’s “music of the street”. Litton’s penchant for occasionally adopting a mazurka-like elongated second beat on the movement’s quieter, slower passages brought an effective “funhouse mirror” emphasis to the sardonic scherzo. The Largo’s early string climax did not quite deliver the work’s anguish, but the orchestra hit the mark on the latter, with particularly effective coloration. The finale provided some of the best playing – and while some may quibble with Litton’s slow accelerando from the downbeat to the central section in which the solo horn echoes the movement’s second theme, the orchestra followed Litton’s tempo changes with impressive precision. Litton adopts a slower-than-usual tempo for the coda and the music leading into it, and the orchestra played it with fervent conviction and power. Yet the most impressive moments throughout the Fifth came in its quieter moments, with stunningly beautiful playing from the principal woodwinds.

There were two encores: some of the best Grieg I have ever heard in the form of his The Last Spring – the Bergen string players brought poignant substance to this miniature – and a hair-raising rendition of the Act Two finale of Prokofiev’s Romeo and Juliet that was more than a little reminiscent of Erich Leinsdorf’s way with this music during his Boston Symphony years.