Peter Grimes – Opera in three Acts to a libretto by Montagu Slater, after the poem from George Crabbe’s The Borough [semi-staged; sung in English with surtitles]

Emotion trumps reason. It goes some way towards explaining how a small, close-knit community can be ruled by a fear of the outsider and how that fear can quickly turn into persecution. The otherness of an unconventional personality and the psychological fault-lines of a flawed human being are what must have fascinated Britten when writing what is his undoubted masterpiece – though George Crabbe’s original figure of Peter Grimes is much less ambiguously a villain. 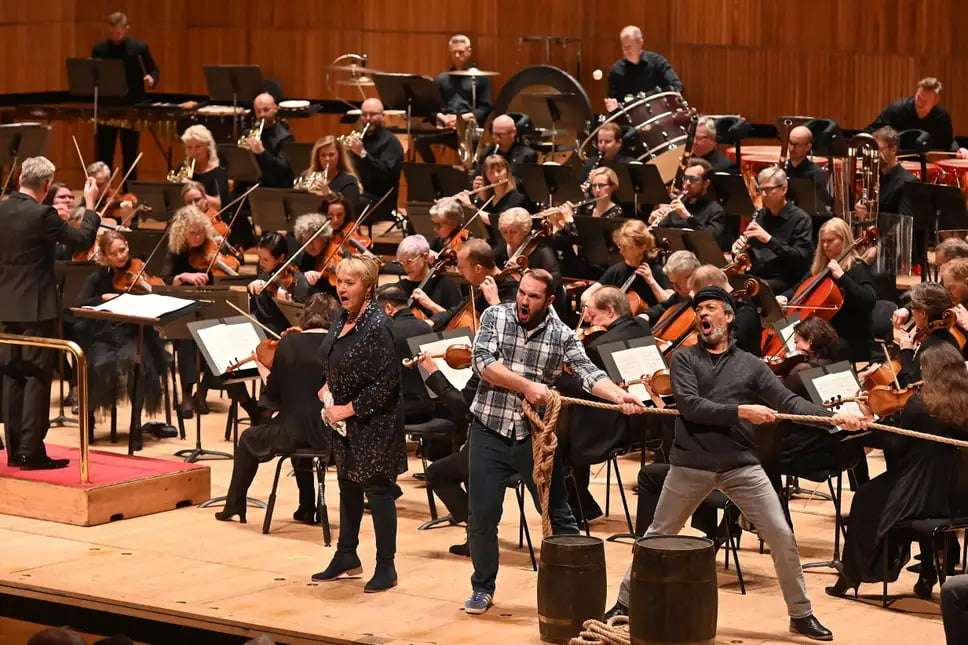 What was truly remarkable in Stuart Skelton’s assumption of the title role were the many insights into how emotional unpredictability governs the actions of this Suffolk fisherman called Peter Grimes. This Grimes initially insists on “the importance of the truth” but then reveals an increasingly disturbing self-centredness. This Grimes is a choleric creature who moves from a haunted quality on his first appearance in the Prologue, with a little-boy-lost look suggesting a victim rather than a perpetrator, through anguished despair at ever finding his own inner peace (“What harbour can embrace terrors and tragedies?”) to moments of eruptive violence, both vocally and physically, as when he assaults the local preacher and roughly picks up a boy apprentice before carrying him off on his shoulders. This Grimes is bad, mad and dangerous to know. As the villagers conclude, “The Borough is afraid”.

Vocally, Skelton was on top form, easily encompassing all the technical demands made on the voice, producing a chilling and blood-curdling intensity in his Act One exchanges with Balstrode when he recalls being “alone with a childish death”, negotiating the sotto voce recitative after his “Now the Great Bear and Pleiades” with tender simplicity, and floating a wonderful line of top notes in his poignant monologue, delivered in the presence of his latest boy apprentice, when he paints the life he fondly imagines for himself. Skelton was a commanding physical presence throughout, often pacing the stage like a caged tiger, and presenting in the final act the slow and moving disintegration of a human being. This Grimes is dishevelled, desperate and distraught, and ultimately doomed.

This performance with collective Bergen forces had the added advantage of a strong cast. From the stentorian tones of Clive Bayley’s Swallow to the nicely whining and self-pitying presentation of Catherine Wyn-Rogers’s Mrs Sedley, there was much to savour. Roderick Williams was an avuncular Balstrode, especially appealing in his final scene interaction with Grimes (“We’ve come to take you home”); Erin Wall deployed all her registers topped by a creamy top line to full effect as a surprisingly youthful-sounding Ellen Orford; Susan Bickley as Auntie together with her two “snowflake” nieces embodied in business-like fashion the insidiousness and hypocrisy of the demi-world they inhabited. 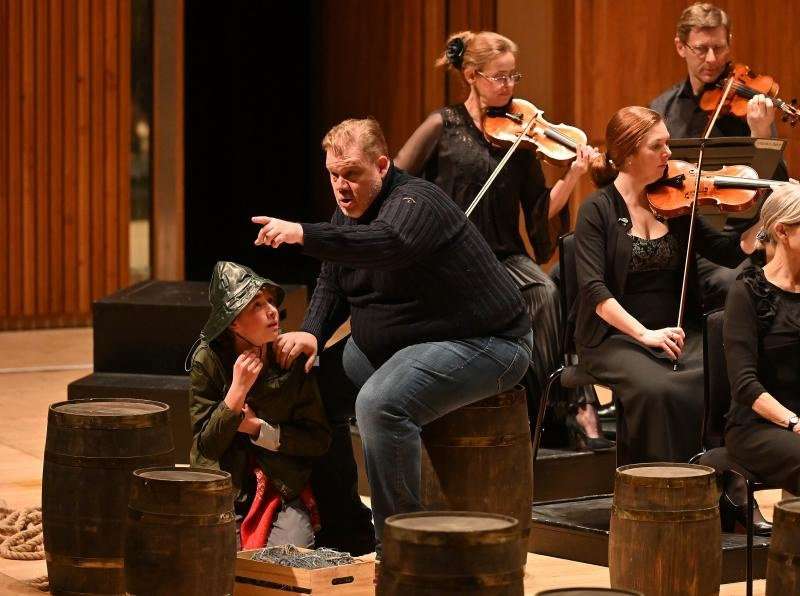 The staging of this production was much less satisfactory. Inevitably, there have to be compromises when most of the platform is taken up with a large orchestra and the choir seats behind are filled to capacity. This left a narrow passageway at the very front, dressed with several darkened kegs of liquor, which doubled up as seating, and a mini winner’s rostrum for the delivery of keynote episodes. A long piece of thick rope, Ellen Orford’s prim little wicker-basket, and Balstrode’s pipe plus sea captain’s hat exhausted the range of props. A long line of supporting characters, standing around and looking bemused, occasionally turning this way and that, did not add up to very much in the way of further characterisation. All the cast were kitted out in modern-day dress, with the choral ensemble sporting blue-green nautical garb. Some of the choices were frankly puzzling: an Ellen Orford wearing a mini-skirt (just like one of the nieces) and high heels did nothing to suggest a widowed schoolmistress. Above all, given what is possible in this venue with semi-staged productions, nothing was done to use additional lighting imaginatively.

The choir stalls were packed with a gargantuan group of singers, the little Suffolk fishing village envisaged by Britten having clearly become a seaport of quite international dimensions. To be fair, this often led to thrilling sounds. When in Act Two the villagers join the accusations levelled against Ellen Orford for her alleged complicity (“She helped him in his cruel games”), and then in the final act (“We’ll make the murderer pay for his crime”), the fury and venom in the singing was quite terrifying. But too often Britten’s writing for the chorus sounded more like an oratorio, even though their softly moaning cries of “Peter Grimes” in the closing scene were highly effective.

Britten is not alone among opera composers in assigning a particular role to the orchestra in foreshadowing events – Wagner was undoubtedly an important influence – but the five separate interludes (or preludes) which he wrote all have a great imaginative eloquence in their own right. Two things stood out for me in the superb playing of the Bergen Philharmonic Orchestra and the excellent shaping of the musical flow by Edward Gardner. One was the crystalline beauty of the first prelude (“Dawn”), in which the violins took on a glass-like quality, seemingly reflecting the emerging light from all angles; the other was the ferocity of the playing in the second (“Storm”), taken at whiplash speed, the brass sinister and with a cutting edge, the woodwind suitably acidulous and the strings deliberately deprived of all warmth, and in which Gardner brought out deep well-springs of Mahlerian anguish. There was an especially affecting viola solo (Britten’s own instrument) from Ilze Klava just before the fourth interlude and again at the end of Act Two as a lament for the apprentice who falls to his death.

In his masterly use of orchestral effects, in the subtleties of a sound-world which underpins the vocal writing and conveys a dazzling variety of sea vistas, and not least in the portrayal of one of the most successful of all operatic anti-heroes, Britten created an opera with a timeless message. I reckon he would have been very proud of Stuart Skelton’s realisation of a humble but tortured Suffolk fisherman.