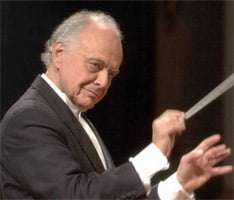 Some quarters have expressed surprise that Lorin Maazel is conducting Luciano Berio, but this particular combination of conductor and composer almost seems a natural. Maazel’s own orchestral compositions bear no small resemblance to Berio’s in their daring use of imaginative orchestration and colors, and both concern themselves with the intersection (and clash) of traditional musical forms and instruments with modern idioms. Moreover, Maazel has a long track-record conducting Berio’s works, most notably the highly-praised premiere of “Un re in ascolto”, Berio’s ‘azione musicale’ (the composer’s description, as opposed to opera), at the 1984 Salzburg Festival.

Berio’s Sinfonia is scored for eight amplified vocal soloists and Orchestra. It was commissioned by the New York Philharmonic, and premiered in 1968; in 1969, Berio added a final movement shortly before he recorded the work with the Philharmonic for Columbia. The work was conceived and written at the culmination of cultural and social crises of the turbulent 1960s; the assassination of Martin Luther King in 1968 took place as Berio was drafting the music, and the second movement, ‘O King’, an extended version of the 1967 version built on sustained notes constructed from the slow intonation of the sounds that constitute his name, became a haunting elegy to the civil rights leader. 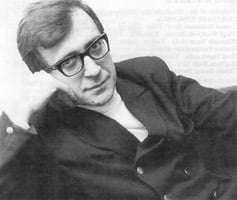 Sinfonia’s third movement uses the scherzo of Mahler’s Symphony No.2 (Resurrection) as a framework upon which Berio — sometimes humorously, sometimes hallucinatory — builds with texts drawn from Samuel Beckett’s “The Unnameable” and musical quotes from other works, most from the twentieth-century — careful listeners will recognize everything from motifs to tutti passages from works by Mahler, Debussy, Stravinsky (The Rite of Spring), Berg, Richard Strauss, Ravel, Boulez, Bach, Brahms, Hindemith, Nono, Stockhausen and others, sometimes juxtaposed with tongue firmly planted in cheek.

Composer Steven Stucky and Synergy Vocals gave a pre-performance ‘roadmap’ of the Sinfonia, demonstrating some of the vocal ‘tricks’ Berio deploys, harmonic landmarks that unify the piece, and some of the significant portions of text – notably those of post-modern anthropologist by Claude Levi-Strauss, especially key words “feu” (fire), “eau” (water) and “sangre” (blood) and their transformations.

Maazel’s approach to the work utilized a wide dynamic range and gave the vocalists more prominence than one hears on the recordings by Chailly, Boulez and Eötvös — especially in the third movement, where the Mahler pastiche and voices were vying for prominence in a manner more harrowing than humorous. Accented attacks, particularly in ‘O King’ and fifth movements, had a particularly lacerating bite.

Maazel and the assembled forces hit a particular high mark with the delicate, slow, fourth movement, in which the orchestra echoes the poignant opening theme ‘played’ by the amplified vocalists as an instrumental octet. Maazel tapped into both the contrasting stasis of Berio’s chordal material and the disconcerting, sometimes anger-infused toccata-like instrumental riffs that weave through the texture of the fifth movement, propelling the work to a vigorous but ambiguous conclusion. 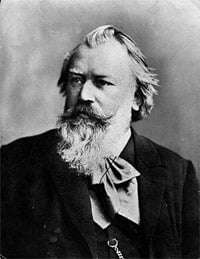 Johannes Brahms completed his final symphony in 1885; in contrast to the restrained, bucolic atmosphere of most of the works which he wrote during his last twelve years, Symphony No.4 contains strikingly passionate and turbulent music. No less a perfectionist than Arnold Schoenberg admired Brahms in general, and the Fourth Symphony in particular for its combination of rugged beauty and remarkable structural detail, including the use of motivic figurations that reinforce the work’s structural coherence.

Maazel gave a risky, red-blooded performance that sometimes brought more attention to rhetoric than the music itself. Maazel lingered over the first notes before hitting the gas and propelling the opening theme of the first movement at a tempo faster than one usually hears; this became a broader accelerando at the movement’s recapitulation. The opening was a portent of Maazel’s use of subtle (and not-so-subtle) tempo shifts and gradations he used throughout the symphony to delineate structure. Timbres throughout tended to be on the bright side; those accustomed to a more euphonious sound favoring the ‘deep’ low timbres Brahms preferred got a completely different take on the work from Maazel, who clearly revels in the contrapuntal intricacies and ‘mood swings’ of the work. The first movement left the impression not so much of a ‘Tragic Overture No.2’ but a ‘Portents of Anguish Overture’ — complementing, in an unexpected way, the turbulence of the Berio!

The second movement was unexpectedly light and fleet, with dazzling ensemble and section playing; the playing of the lyrical opening theme by principal clarinettist Stanley Drucker and its recapitulation in the superb viola section was memorably gratifying. Throughout, Maazel elicited a lush expressive style more characteristic of the great central European orchestras of half a century ago, and brought the movement to an end with an unexpectedly lingering, slow tempo.

The scherzo had a satisfying balance of incisiveness without too much ‘punch’ and contrast in character and color. The fourth movement chaconne sacrificed quite a bit in the area of coherence; Maazel’s tempo-manipulation tore into the continuity, but played to the strengths of the Philharmonic’s virtuosity. Critic Eduard Hanslick is reputed to have said upon hearing the first movement of the work, “For this whole movement I had the feeling that I was being given a beating by two incredibly intelligent people.” That was not too far from my feeling about the finale: Maazel and his unknowing accomplice Brahms, first playing the ominous main theme with deceptive euphony, then — wham! – variation after — slam! — variation straight through to the final E minor chord.

I loved the Berio, but needed some extra-strength analgesics after the Brahms.